Housing was overvalued, we knew that....well some independent thinking younger folk knew that. Obviously not the higher ups at Wall Street's "elite" bulge bracket" who were paid multiple hundreds of millions of dollars in compensation to run America's largest financial institutions into the ground. But why rub salt into blue blooder's wounds?

In any case there is another asset bubble. I've always worried about what would happen when the Baby Boomers retire instead of contribute $60 billion per month in 401k contributions, instead started selling out of stocks and move to fixed income? But complicate that with the prospect of American companies losing money or at least not making as much money as they previously did and the stock market looks precipitously close to a crash.

Of course this has already started happening as the primary driver of American corporate profits has come to a stand still; property values and very loose, borderline charitable credit.

Alas why I like the chart provided by Professor Genius Robert Shiller who has measured the S&P 500's P/E ratio going back to 1881. The average multiple at which a stock's price trades above it's earnings is about 16.

Today its around 40% more its historical average. Though this chart does not include the market's follies in the past month, the market could still have a way to go before it gets back in line with historical trends. 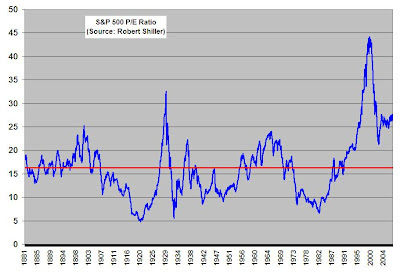 But don't worry. They're TALKING about THINKING about CONTEMPLATING about PONDERING the CONCEPT of MAYBE implementing a THEORETICAL stimulus package in Washington.

The Baby Boomers won't shift their wealth all at once, won't they?

Captain, I can't wait to hear you again kicking some communist asses on radio. Are there any plans to bring back your show?

No, you're right, but it certainly isn't going to be flooding the market with equity-chasing dollars.

Wish I was back on, but they coverted the station to pretty much an all-sports format with the occasional political commentary. Another radio station in town is kicking their ass, and primarily because they are FM and not AM. Oh well.

I've long held the same theory but lack a solution that I like. Given that retiring baby boomers will pull their money out of (or at least stop contributing to) the market...where else does one go? An average retirement plan practically shoves you into common stocks. If you're locked into a 401(k) where does one retreat from a large, sustained, and market wide slowdown? I've thought of everything from small cap, to international, to hoarding gold (just kidding about the gold!) none seems fundamentally isolated from boomers.