The Captain is "Pro-Dog"

I always wanted a dog. If the communists and "do-gooders" of this world would have just left society alone, we would have been able to take our dogs to work, take them to the theater, and if particularly well-behaved, a restaurant.

Of course, nowadays the average child is so ill-reared by an incompetent parent a mangy mutt is a pleasant alternative to the screaming brat in the restaurant, but because of canineism (it's like racism, except against canines) we get to suffer the spoiled brat.

Regardless, I was about to adopt Dooney. I really was. I was about to get my first dog and I could then live my dream of having a hound with me to sniff out fossils and agates in the prairielands of South Dakota. The problem is that Natasha's (again) communist, anti-American, evil, fascist, dictatorship, canineist apartment management is DISCRIMINATING against poor Dooney because he is afterall, a dog, and charge an extra $50 a month to have a dog on the premises!

Since I cannot adopt him and use him to sniff out fossils and agates in the great South Dakotan prairies, perhaps somebody in the Capposphere can? 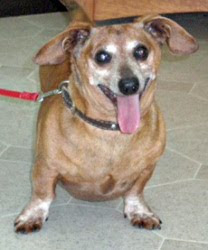 It's too bad, because he would really be like a shorter hairier version of a son to me.
Posted by Captain Capitalism at 10:36 AM

That is one of the benefits of home ownership. You get to have what you want and do what you want. You live in a depressed and crumbling part of the country. You ought to be able to pick up a property real cheap in a rural area out there. You may not get the granite counter tops, but somehow I get the feeling you don't care much about granite counter tops. Apart from that there are many dog friendly landlords.

So what's the problem Captain? MOVE FOR CRYING OUT LOUD!! Stop whining and get your dog!

Thanks, but I already have two neurotic dogs and the wife is looking at another.

At $50 per month, that gets to be a very expensive dog.

I could understand an extra $100-150 one time fee for a damage deposit.

The question though, is do they have similar charges for other animals such as cats - they are every bit as bad if not worse than dogs.

Cappy, normally I agree with most, if not everything, that you say. But in this instance, the cold heart of the economist is missing the point badly. You mean 50 dollars per month is more important to you than that happy little doggy persona who just wants to be with you as you? (Not like a lot of my ex girlfriends, I can tell you that).

The 50 per month also keeps people from getting a dog du jour (yes, there are people like that), and deciding after a while they don't want it.

I honestly hope you pony up the 50.

I decided not to get the dog, not necessarily for the $50 per month cost, but for the fact I realized I probably could not provide Dooney the support and presence he needed should I ever get a day time job. It's like a kid. DOesn't matter if I want one, it's whether should I have one?

Cap'n....Thank you for pro-canine rant!
I don't know what the laws are like where you live, but in Ontario, the "no pet" clause in leases is illegal. So even if you agree to the clause by signing a lease, you're not legally bound by it because it's a void clause. But landlords put it in there because they know it will scare off 99% of pet owners.

Come on, Cap'n....you know you're all about going against the grain! Adopt him.

"I don't know what the laws are like where you live, but in Ontario, the "no pet" clause in leases is illegal."

It should be up to the landlord to allow pets (or kids, or whatever) or not.

Some people don't mind the smell of a dog, or the noise of kids. I'd rather stay someplace where I don't have to deal with it. I'm the market for the "no pets" apartments. People who have pets, obviously, prefer apartments that allow them. Leave it up to the landlords to decide which is better for their apartments, since there's a market for both and any kind of legislation for or against pet ownership in an apartment will mean that somebody gets screwed.

Not that forbidding pets is 100% effective anyway. I had to bleach the walls and floor of the closet in my current apartment (which is no pets allowed) when I moved in because the previous tenant had a cat that pissed in there.