I love watching Minneapolis slowly turn into (as Jason Lewis says) a "cold Detroit." It is vindication or prediction of several things;

1. I was right and had foresight to escape from Minneapolis.
2. It's juicy watching the leftists in the town do it to themselves by continually voting to tax themselves higher and higher as they are unable to link their high property taxes to bike paths, $50,000 drinking fountains and green roofs while they lay off cops).
3. Proof on a municipal level that the free market is not a theory, but is reality
4. "Micro" capital and intellectual flight.
5. Property prices will continue to drop in the area
6. Neighborhoods such as Seward, Longfellow, Linden Hills, and Kenwood where the trust fund baby limosuine liberals live in Minneapolis will pay the most for their ignorance of basic economics as they finance more and more of the city's impossible and unsustainable finances

But the latest is something that you just can't make up and shows you the liberals who all reside in Minneapolis are actually the frogs in the frying pan where the heat is forever being turned up.

A friend of mine who was unable to unload his property in Minneapolis got this in the mail; 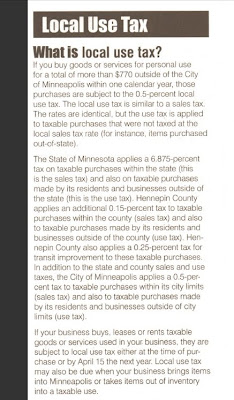 In short there is a municipal sales tax of .5% the city of Minneapolis charges. The city, now so desperate for money, has sent out letters telling residents that (get ready for this)

They are so desperate, as well as totalitarian, they find nothing wrong with forcing their citizens with the onerous task of tracking their purchases from anywhere outside Minneapolis and then adding them up and then paying .5% on all purchases come April 15th. It's like having to file now another tax return that is even more onerous than filing a federal tax return.

Now, of course the question is this;

Will all the hippies in Minneapolis who voted this tyranny upon themselves will even bother to pay this tax - not out of a desire NOT to pay, but rather because they don't even know about it?

Regardless, as time goes on, I'm progressively happier and happier I escaped Minneapolis. It's kind of like escaping the Death Star in Return of the Jedi. I hope the rest of my Minneapolis bretheren don't get caught in the explosion. Sadly, too many are taken in by the Walker Art Center, uptown coffee shops and other dying "cultural" remnants of the 1990's grunge era to escape with me and Wedge.

Posted by Captain Capitalism at 12:08 PM

If you want to see an example of non-local tax collections taken to the extreme, check out North Carolina.

Regarding Minneapolis, the city's population is increasing for the same reason that San Francisco and New York continue to do well: people who live here think it's worth it.

Since you didn't feel like you were getting your money's worth, it sounds like you made the right decision to leave. That's much easier that fighting against the majority of Minneapolitans who keep electing people with a shared vision of the roll of government.

Taken literally, that tax notice implies that tax is owed for goods and services that are consumed entirely outside the jurisdiction of Minneapolis. For example, lodging, entertainment, and meals during vacation or an out of city business trip. It also appears to imply the usual exceptions to most sales taxes do not apply to it.

Minneapolis, in it's current state, is not sustainable.

Either the citizens wise up (not likely) or the city will devolve into a cold Omaha (as Sid would say) then into a Cleveland and then into a Detroit.

Personally, if Dayton wins the governorship, I'll have to consider relocating to a more tax-friendly state.

Ed, in all seriousness, you need to get out of that place. Personal politics aside, you are one of the few intellectually honest lefties I know and you don't deserve the hell you're about to bring upon yourself (not to sound like a preacher).

Sell your assets, get the hell out of there and stake up or cash up in some place where you aren't going to be ass raped for your income or your assets.

Let the politics go and just ask yourself if the muni government is demanding you report extra-municipal purchases so they can tax you is an environment you want to live in.

RE: Ed, Unfortunatly the "Shared Vision of the roll of government" is GREED. If a person beleives that other people should provide payment for things they like, it is GREED - not "Compasion".
I don't want anything from anybody, just to left alone and leave my freedom alone - including Economic Freedom.
Typically a "Shared Vision of the roll of government" is a deviation from the Constitution. Freedom only exists if people have Economic Freedom, taxation encroaches further and further into Economic Freedom. At some point, when does Taxation become Slavery? If all the fruits of your labor is turned over to the State, are you not a slave to the State??

Gee, can you IMAGINE the overhead, if anybody actually has to calculate all this at the end of the year/Month.

I'm overwhelmed by it just thinking of it.

I hate laws like this, they cost more to comply with than they raise, so they tax you thrice, first one presumes you paid whatever local taxes were relevant, then a non-trivial time tax as you try to comply with crap like this, and then pay it.

And it's one thing if you live and work locally, but if you are like me and you travel regularly for living it's a major pain inthe arse.

I'd leave the city just to avoid this crap, and then you get nada. I used to live onthe east coast near NYC, I was employed by a compnay in NJ, my purported office was in NYC itself, and I lived in CT, but so close to the border that my doctor and usual grocery store were in NY State. NIGHTMARE taxation. (And I completety ignored CT tax regulation about major expenses made in other states needed to pay taxes in CT too, I figured if they ever caught me they deserved the money, but life was too short to spend a week categorizing my expenses geographically. (I guess if I bought a car or something I'd care.)

Anyone who complies with this extortion deserves the abuse for being so damned chicken-shit!!