The Golden Years of California is Behind Them

A chart I'm very proud of is the "generational RGDP growth" I put together for the nation which shows the 20 year average real economic growth rate of the nation going from 4.5% to 2.25%. The ramifications which of course shows we're slowing down and are incapable of producing the economic production necessary to tax and pay for all the government goodies we've promised ourselves. However, I decided to do the same for the state of California with it's Gross State Product. The reason why is multifold;

1. The brilliant election of Jerry Brown, Barbara Boxer and others show the citizens of California are still incomprehensibly ignorant when it comes to basic economics let alone their own state's historical finances.

2. I tire rather quickly of hearing people from California tell me how "everything" is created and made in California and that their economy is booming and why you're just a red-neck hick in a fly over state that doesn't understand how truly economically and culturally awesome we are.

3. California, much like the banks, is going to need a bailout at the expense of the other states in the Union, which is why (when that time comes) I advocate turning California back into a territory.

4. Californians dismissing all their economic woes by saying, "but the weather is really nice" which is the same that could be said of Cuba and Haiti.

5. Citing Silicon Valley as some kind of super economic savior when in reality that was what it was 10 years ago and has since been shipped out to India.

6. The nazis in San Francisco find it their place to tell parents how to feed their kids and have banned toys from Happy Meals.

All of these things (and much more) do NOT help bring about economic growth, but rather impede it.

So to see if my economic spidey senses were correct and to see if California is once again the economic juggernaut all pro-California people claim it is, I pulled its year to year RGSP growth rates and then averaged them over 20 years to see what the general trend it. 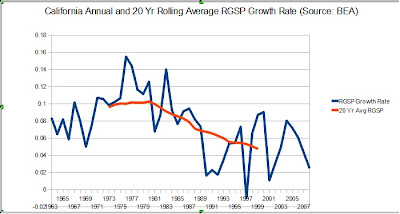 Once booming and a genuinely golden era of economic progress, California touted a VERY impressive 10% annual economic growth rate during the 60's and 70's.

It's now half that.

Again, I don't know how they're going to pay for all they promised their citizens and government employees (well I do know, they're going to come to other states for a bailout), but it seems with their economic growth rate cut in half, they certainly won't be growing their way out of their problems.

(statistical note, this does not include 2009 or soon to be 2010 GSP which I'm sure would only reinforce the trend).

Enjoy the decline! (or move to Arizona)
Posted by Captain Capitalism at 1:44 PM

After last night it looks like there won't be a bailout coming - at least not for 2 years, if not longer.

Jerry Brown is toast. If he doesn't take on the unions, the state will collapse.

Brown knows it too. I wouldn't be surprised if he turns into a conservative. But only because there is no other alternative - except to play chicken with the Republican congress, which I bet he would lose.

Why not ask Hollywood for the bailout? I am certain the leading lights of our entertainment industry would be delighted to pay. After all, they have been behind the election of liberals like Brown, Pelosi and Boxter for decades. Not to bail out the state that did what Hollywood campaigned for would be rather hypocritical of the Hollywood elite.

So get this: in his first press conference as Governor-Elect, the media asks Brown, "So how will you balance the budget with a $20 billion deficit? What will you cut? Will you raise taxes?"

These were good questions to ask... four months ago.

I posted this on another site and I'll repeat it here.

Actually it's going to be very interesting in California over the next few years. With full control over the Assembly and Senate, as well as all the major elected state offices, the Democrats have no excuse if their policies fail. Add that they can now pass a budget with a simple majority, so they don't need the Republicans for that.

However, due to the passing of props. 22 and 26 (and the current rules in place) they can't just add new taxes or fees without a 2/3 majority, which they don't have, nor can they just take the money from local governments to pay for their programs. So let's see how they close the estimated $12B shortfall with the next budget. Oh and somehow I don't think that the Feds will bail Calif. out now, so asking Congress for the cash isn't a viable option.

Add that the next reapportion will be done by an independent committee and not the state legislature. Makes for some drama in the 2012 Congressional election.

Mr. Captain, I think you made a mistake regarding the California voters being ignorant of basic economics. I believe the vote reflects the fact that the majority of California voters live off the public sector. California has had a massive loss of businesses and productive people.The tax receiving scum are now in the majority.This also happened in Greece.In Greece, the private sector and nonunion workforce, became less then 50% of the economy. This is also a great method to allow a state to go bankrupt. Lets just wait and see, how long before Governor Moonbeam starts asking the private sector in the other 49 States for bailout money. Germany foolishly gave bailout money to Greece. Will Washington bailout California? How long will America`s socialist nightmare continue? Well Captain, I guess we will have to stay tuned to your Blog, to find out the answer.