How Much of an Advantage Do Hot Conservative Women Get?

1.  I do not HATE anybody in the group of women used in this study (bar Katie Kieffer, who I don't even hate, I just have no respect for).  Many of them are intelligent and accomplished, some of whom I do listen to regularly...while many are not.  Do not take this personally if you know you are one of those women who are talented, who do make original content and do NOT mere regurgitate conservative talking points.

2.  I am aware that there are other people on the lists you would like to see.  These lists were compiled with what I had and in a non-scientific fashion.  I will gladly add others to help the accuracy of the study.  But for now, this is the data I had to work with.

A well known fact about life is that pretty girls have it easier.

However, I was curious just HOW MUCH of an advantage there is.

Specifically, instead of being a super awesome economic genius trapped in a 5'9" average looking male body, what if I was instead a very average mind trapped in a cute 20 something female body with a nice set of perky tits?

This was the result: 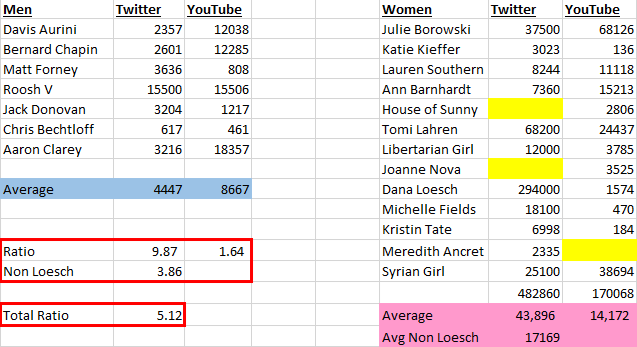 In short, when you average it out women are paid a premium of 512% over their internet male micro-celebrity counterparts.

Certainly there ARE accomplished, intelligent, insightful people on both sides.  However, when you average it out, it is just not comparable.  The sheer number of ditzes in the female list REALLY DO get by on their looks.  Again, I don't "hate" anyone on either list, but when a girl is essentially paid 5 times to regurgitate talking points Limbaugh made before they were born, or epiphanies I realized on my blog when they were in grade school, don't tell me all the men in the conservative or libertarian movement are "deep philosophical types."  They're just your regular average horny guys who happen to vote Republican.  That is the market you are serving.  Not your high-minded economic and political intellectuals.

you will find no easier career than being a "COLBOTI" (Conservative Or Libertarian Babe on the Internet).  You will make 5 times the audience your male counterpart has in 1/5th the time, making 5 times the money.  And if you happen to actually be SMART and not just a cute set of tits, you can write your own ticket for the rest of your life.

I know this post sounds cheeky.  I know it sounds arrogant.  I know it may have insulted some people.

but what about the whole men's right part of YouTube and twitter..these guys have tens of thousands of followers on YouTube and twitter. Mike Cernovich, etc. Sargon has a huge presense. I don't think the disparity is that great even though it still exists.

Run the numbers on trading in convex for concave as a business strategy, like ol' Bruce Jenner. The writing is on the wall. Yosemite Sam sez: "If you can't beat 'em, join 'em."

I see your disclaimer, so I don't think you'd argue with me here.

There is some truth to your post, but I think your methodology is flawed and it will exaggerate the advantage of being a pretty woman. You are comparing a selection of popular manosphere personalities to the most popular female libertarian/conservatives on the web.

I'm also noting something a bit surprising. The women get more Twitter followers vs youtube subscribers and the men get the opposite pattern. If there is an advantage to looking good, I would have expected it to be more reflected in video than tweets. Of course, you could argue that the men have a tougher time getting attention so they need to resort to the more time-intensive video format.

Do you not yet realize that on the Internet, nobody knows that you're a dog?

Are you truly not Net-savvy enough to start a blog as a hot conservative chick who likes her privacy???

Or are you really sure it is indeed Miley Cyrus that you are chatting with? And not Jeh Johnson?
}:-]

I was tempted to put in Molynuex and Sargon, but Sargon is actually a leftist while Molyneux is a celebrity now. I also kept out some Fox News babes on account of that "celebrity rule." In short, trying to keep it NON-mainstream media members, but "natural, organic, grass roots" type of people.

you should've taken their alexa rankings into account as well. alexa.com , i think.

Alexa seems to be more heavily skewed to the left in their page rankings than google, and is also more easily gamed by using excessive linkage. Look elsewhere for accuracy.

Hey checkout Gloria Alvarez from Guatemala. She is a libertarian with no fresh ideas, she only regurgitates oldschool libertarianism and has lots of followers.