Yet Another Reason Why It's Not "Big Oil"

I like this chart because it shows you two things;

1. That part of the reason gas is so expensive here in the US isn't so much the scarcity of oil (though that has its effect too), but the fact that the US dollar has lost so much of its value that it takes that many more dollars to buy a barrel of oil. Note compared to the Euro oil is not that expensive. Alas there is a price to pay to think that you can just borrow to live and not produce.

2. It compares three currencies (lest you have forgotten that gold was at one time a currency). If we were to be on the gold standard then oil really wouldn't be any more expensive than it was in 2000. 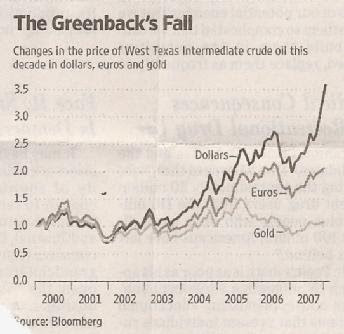 Now you can go ahead and blame the Fed for debasing the currency and blame Alan Greenspan because you have a headache, but the truth is that what really gives a currency it's value today is the wealth that you can buy with it.

For example I cannot go to Malaysia with US dollars and buy stuff. I have to convert it into the Malaysian currency, the Ringgit . Thus the only thing you can buy with US dollars is the stuff sold in the US. Therefore the value of the dollar depends on how much stuff Americans produce, not just "because the government says it has value." And if Americans insist on borrowing money from their homes to go and buy a big screen HDTV made in China, they are not producing anything of value here and therefore debasing the currency.

So if you want cheaper gas, cheaper imports in general, not to mention a whole slew of benefits that could be attained by producing more and spending less, take a second job, start paying off your debts. Quit using your house as an ATM and become an old school American. Increase the value of the dollar.
Posted by Captain Capitalism at 9:00 AM

Bingo! Exactly right! They have completely debased the US currency, despite ridiculous statements from Treasury that they are in favor of a strong dollar. Anyone who has US savings or dollar denominated investment has had their wealth cut in half in the last five years. US stock investments in 2007 were up, what, about 6%, but the dollar dropped about 20% meaning -14%!
Now it may have helped exports, but it is hard to see how it can last...

Greater specialization would make imports relatively cheaper, however, due to the increase in opportunity costs of buying domestic goods that we're not specialized in producing.

"Thus the only thing you can buy with US dollars is the stuff sold in the US."

That's mostly true. A lot of places deal in US dollars, especially where moneychangers aren't regulated much. For example, most street vendors in Mexico will accept dollars or pesos.

Adding on to Ryan's comment, a lot of Canadian merchants will accept U.S. dollars. It's not usually to my advantage to use them, but at least in southwestern Ontario, they are accepted.

Ryan Fuller said on the last post about inflationary monetary policy that a gold standard system would mean rising interest rates on borrowing in a time of low savings. Ryan, you are only considering American savings though. Worlwide, there is quite a bit of saving going on (China and India, for exmaple). Now, if money that an American borrows from a bank (and from a foreign person) earns him/her more than the rate of the loan, isn't that money put to good use? Now, it seems to me that the problem isn't a lack of savings or interest rates that are too low, but rather banks that aren't actually making sure the loans will pay themselves off. This is why the government should not intervene when these crises hit. It only makes the banks lazier about researching their loans.

"Now, if money that an American borrows from a bank (and from a foreign person) earns him/her more than the rate of the loan, isn't that money put to good use?"

Sure, if people are actually getting a rate of return higher than the loan, that's good. However, a ridiculous number of Americans take out loans to finance consumption. Rate of return zero.

If banks couldn't loan out nine times their actual reserves, interest rates would be much higher. If it helps, think of intersecting supply and demand curves for loanable funds, and think of what would happen if the supply of loanable funds increased nine times faster than normal. You'd have a much lower market clearing price, which in this case is the interest rate.

"Now, it seems to me that the problem isn't a lack of savings or interest rates that are too low, but rather banks that aren't actually making sure the loans will pay themselves off."

That's definitely another part of the problem. My point was that if interest rates weren't artificially lowered through the fractional reserve system, we'd have fewer people applying for unnecessary loans in the first place. Sloppy research is a very real problem and the Captain would know a whole lot more about that than I would, but do you see where I'm coming from?

"This is why the government should not intervene when these crises hit. It only makes the banks lazier about researching their loans.