So Simple, Yet So Far Away

Socialists in the US get the giggity giggities when you mention Sweden.
Because Sweden, after all, is a superior nation with really smart people and more importantly they are socialists.
I'm half inclined to agree since they just recently decided to LOWER THEIR CORPORATE TAX RATES.
Now this is something so simple that even our incredibly stupid and woefully economically ignorant American college students might be able to figure this one out.
If you want to create jobs, why don't you lower the corporate tax rate to attract businesses which will in turn invest in your country and create jobs?
Now, i know for Cappy Cap readers, this is elementary economics 101, but my post is NOT about this simple solution to our economic problems. It is to mock the American public that has been so brainwashed to be against corporations that they cannot muster up the intellectual honesty to admit they were wrong and that villianizing corporations is in general a bad thing because...well....heh, they kind of create a lot of jobs for us.
Regardless, here are the corporate tax rates in the world; 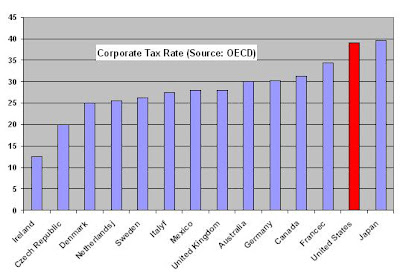 I will pre-emptively strike the guaranteed leftist, knee-jerk, NON-THOUGHT OUT repsonse that no doubt would be offered had I not pre-emptively struck it;
"Oh, yeah, well uhh... you know, corporations, they like have these uh...LOOPHOLES..so uh, like they don't pay taxes."
Yes, thank you, never heard that one before, and from non-CPA's no less.
Here's a crazy thought.
If the US corporate tax rate wasn't 40%, would US corporations even seek out those "loopholes" in the first place?
And oh, what's that? You're bitching and whining about your 401k/403b plan and how much money it lost? What do you think will happen to stock prices if you eliminate corporate taxes?
You know, just never mind, I'm so sick and tired of explaining basic economics to people who can't make that simple link in logic. You really deserve the anti-business, socialists you've elected into government. Enjoy a really horrible, government financed nursing home when you're older.

And even if it this data were erroneous it would not change the argument that lower taxes would cause economic growth. So quit nitpicking and ask yourself the question;

Do you want economic growth, or do you want millions to suffer so you can continue on your little greedy, self-gratifying, yet pointless crusade against "evil" corporations thinking it's still 1968?

In the meantime, I think I hear your mommy calling. She said something about a trust-fund check and you avoiding a real job?
Posted by Captain Capitalism at 9:55 PM

Hmmm... could it be because they don't want to spur on economic growth??

Driving the economy into the ground isn't a bug to these characters, it's a feature!

Of course the goal of this strategy is the creation of a large government dependant class.

Which is a part of the larger strategy of enacting your very own “Cultural Revolution”.

Can you remember the Chinese one? Me neither, but I did read about it! Let’s see, there was the leader worship, the entrenched and untouchable government caste, forced government conscription, government takeover of the economy, re-education camps, indoctrination of children, and the list goes on and on. Don’t be afraid of putting your thinking cap on adding more to the above list. That way you’ll have a better understanding of what’s coming at you.

What was that line Obama used during the election? Was it “we are going to fundamentally change America”?

Although the more important declaration should be “Yes We Can” stop these Lib-Leftist supremacist caste from forcing their vile ideology on society!”

That graph is way out of date. The federal corporate tax rate in Canada for general corporations is 19.5%.

"Driving the economy into the ground isn't a bug to these characters, it's a feature!"

Do I think they honestly and deliberately want to drive the economy into the ground? No, I really don't think that. What is a lot more likely is that they want stuff (health care, houses, cars, savings.) but they do not want to have to pay for it.

Therefore, they look to someone with more available wealth to buy that stuff for them. Turning to an individual is not really going to work out, because they recognize that there are people with less then they have, and they do not want them to come knocking on the door looking for a handout.

So, what is the solution?

Tax the companies. Especially those that were actually business savvy enough to grow and profit over the last several years.

Add to that a charismatic leader that has demonized and vilified profit as somehow evil. (Oh, and let's not forget that fat idiot's new movie equating capitalism with evil.) And, suddenly, it is OK to tax the corporations out of business.

My apologies, but this is the most recent data from the OECD (which I'm starting to fear is becoming less and less rigorous.)

These taxes are just a tax on consumers. Companies just raise their prices, and pass on the tax to the consumer. Or worse they just leave the current location, and produce elsewhere.
I also believe the Canadian rate for 2009 is 26%, and the federal corporate rate will be cut to 15% in 2012. Cutting corporate tax rates in Canada, has been excepted as a way to increase employment.

These taxes are just a tax on consumers. Companies just raise their prices, and pass on the tax to the consumer. Or worse they just leave the current location, and produce elsewhere.
I also believe the Canadian rate for 2009 is 26%, and the federal corporate rate will be cut to 15% in 2012. Cutting corporate tax rates in Canada, has been excepted as a way to increase employment.

I was working for a samll multi-national company (as I often do in my business, electronics).

Whenever a socialist points to Sweden as a successful socialist country I always reply with:

Swedish industry is successful because they have one of the lowest corporate tax rates in the world and have for quite a while.