Obama Just Can't Get It Up...GDP I Mean

With only two effective quarters left of the Obama presidency, I wanted to see what RGDP growth looked like so I could update my famous "Rolling 20 Year Average RGDP Growth Rate."  Once again, this takes the past 20 years of economic growth and averages them out to see what kind of long term, "generational" growth rate our country is producing.  And with last quarter's GDP coming in at a paltry .8% growth rate, I wanted to see what effect Obama's past couple of years has had on this measure.

And it's what you'd expect. 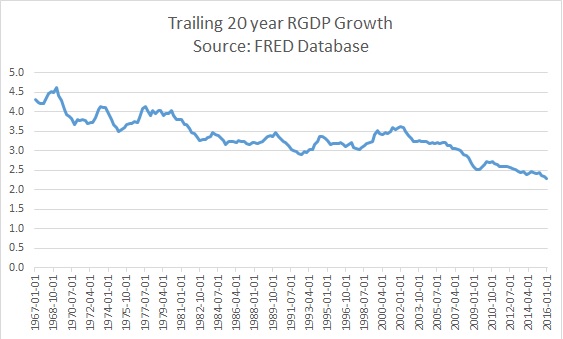 As you know I have largely given up trying to sound the alarms and toll the bells to wake the American sheeple up to the major economic and financial problems we have.  However, this chart is the one I want to be remembered for when I die, because it speaks so directly to the major problem we as a country have.  That we are increasingly lazy, slothful, entitled, and incapable of producing the historical economic growth this nation once did.  And while the only real solution to our immense financial problems is economic growth, this modern day American economic engine is so replete with:

that it's just too weak to produce the growth necessary to solve our financial problems.

So the next time you get involved in some kind of economic debate.
Or you are in class and your professor is talking about how Obama saved the economy.
Or some idiot republican says we need to "grow ourselves" out of these problems

Just point to the chart
Pour yourself a scotch
Take a sip
And tell the fucker to have a cup of STFU.
Posted by Captain Capitalism at 1:30 PM

Great chart! Even a math challenged handyman like myself can read and undertand this. Problem is, you show this to a lib and they freeze, cover thier ears, and begin chanting " VAST RIGHT WING CONSPIRACY, PROTECT ME SAINT HILLARY " As you have written, libs are innoculated against reason.

There is another reason for the low GDP that is not addressed. I am now 61 years old and have worked since age 12. My labor has been stolen to pay corrupt scum and welfare parasites since day one. I expect my Social Security will be stolen or inflated away. I have a vacant rental property that needs to be fixed up and rerented. FUCK IT. The money I would make will just be taxed away. I will fix the house up eventually and rent it, Just not that quickly. I am tired of busting my ass. I have zero respect for this government, will not salute the flag, and have zero respect for most of my fellow citizens. I did not abandon my country, rather, my country abandoned me.

FUCK THIS, WE NEED A RESET!

Fleecing the productive is a sure way to make the productive disappear or at least foster the parasitic mindset to steal, lie, coerce and destroy. Taxed on the money you earn, then taxed on savings, taxed on investments, taxed on tax.

Forced redistribution of income is theft, and makes citizens into slaves and property of someone else’s agenda. WE have people with careers based on the size of and continued existence of poverty and state dependence. They don’t earn their way by voluntary contract and association — they coerce it by state coercion and force.

Why work??? WE have communism. The government control wages and incomes AFTER the fact with taxation. The government takes 50% of everything. If you work hard then it is simply given to someone else by force.

These problems are endemic everywhere. Europeans stopped having kids 2 generations ago, but they all still expect those socialist promises to be delivered by their governments. No new taxpayers to exploit each passing year, they bring populations in to exploit while banking on "magic dirt theory" and assimilation in a generation. What they will get is a third world hell hole with most of Europe being a balkanized Lebanon.

At my age, I simply understand that socialism is about keeping people under control through impoverishment and sustained servitude. If you acquire wealth or earn income, socialism is the means to legitimize stealing from you. Thats it. Forget Marx. Most political parties can fill libraries with meaningless rhetoric, but its about theft and power. You understand why the US Constitution is hated by most-- it limits the states power over individuals, but few People have ever read it.

Hmm. SJW alert: Could this be the REAL cause of all that inequality you are so hyped up about? (Trigger warning, contains charts that some of you "math is hard" types may have difficulty with).

and supposedly there will be gdp revisions coming out july 29th that will make growth even lower.

i dont even argue with the socialists, they own the country and it's wither going to get so bad there is a reversal or the usa is over as founded. if hillary wins, it's the later and i will be consuming much scotch on election night.

and great thoughts fairness cynic:
"I did not abandon my country, rather, my country abandoned me."

Great find! Funny that one of my uncles was able to work modest jobs like a parts counter job at a farm implement company for many years and have a modest home, a car, and support a wife and child under that horrible link to gold and silver.

Of course, there is no desire by either party to strike most of the regulations at the local, state, or federal level that now consume the GDP of a small country or economically productive US state.