If you didn't remember, there was a "Copyright Sunrise 1998" script at the bottom of every video.  But if you were like me and too busy paying attention to the perfect Japanese anime that was unfolding in front of you, you are forgiven.

Still, you're old, so let's review what Cowboy Bebop did for us all.

First, it was unique in that most Japanese animation sucks.  I remember getting excited when Robotech hit America's shores and if you watch it today, though horrible, it's still better than most anime coming from our Japanese cousins.  Cowboy Bebop improved, if not, perfected upon that becoming the one oddity of Japanese anime that didn't completely suck.  There was a plot, nobody turned into monsters or mecha, you could follow it, and the character development was so good it made you sad, if not furious when it ended. 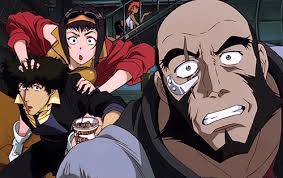 Second, it was original.  I know people love "Firefly."  I too love "Firefly."  But let's just admit it.  Firefly is simply plagiarism of Cowboy Bebop (though I do believe Joss Whedon did originally develop it).  Cowboy Bebop was a very welcomed original idea and original work that global audiences desperately needed as Hollywood embarked on its sequel-prequel regurgitation slop binge that plagues us 20 years later.  You truly didn't know what was going to happen in Cowboy Bebop because it was truly original.  It actually left the viewer to wonder. 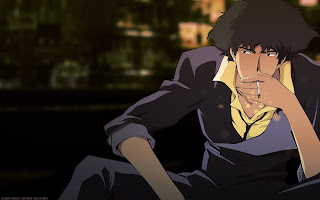 Third, it was instructional.  If you watched Cowboy Bebop you likely had poor role models in the real world.  Your parents divorced, your dad wasn't around, your dad may have been around, but was a pansy, and the last bit of true manliness that was on TV was Spike and fatherly Jet.  After 1998 the male role model was more or less absent, but every young man back then and today looks up to Spike, Jet, John McClane, and Tony Stark for idealism, masculinity, and a goal to aim for.  Also, the harsh lesson of reality was painfully apparent in the life of Spike and Jet.  Life was not easy, life was in fact, incredibly unfair and painful.  But a flippant accepting attitude of this reality, combined with a zealous adherence to secretly-held morals and principles (of which you controlled) manifested itself in the form of calm, cool collected Spike and the long-suffering Jet.  They may have not had beef with the bell peppers, but they had perfectly honed moral compasses and thus became models for any human with an ounce of morality and goodness within them.

Finally, it was beautiful.  I know most of the people today can't get enough of the indistinguishable slop served up as rap, country music, or whatever Beyonce and Taylor Swift barf out of their mouths every month.  But Cowboy Bebop was not made for the normies, conformies, inferiors, and lemmings.  It was made for superior people who appreciate true art.  And the musical score of Cowboy Bebop is just not even approachable.  It was perfect.  One could even say the music was wasted like pearls on swine as most people were thinking "meh, it's kind of cool, but why is the dog there?" instead of listening to the amazing score that contexted the show. 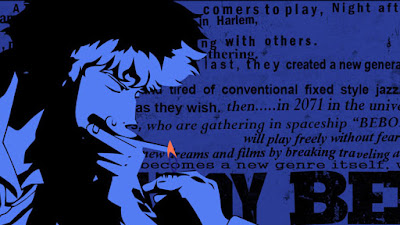 In the end Cowboy Bebop is one of the most perfected and beautiful forms of art humanity has ever created.  I strongly recommend that every person watch the movie as an introduction to the series, and if not, outright buy the entire series.  You will not be let down,  it will improve you as a human being, and you will almost be depressed that this art ended so early.  Alas, that is what true Cowboy Bebop fans want - more.  But a mistress who doesn't leave you wanting more wasn't much of a mistress now, was she?

Posted by Captain Capitalism at 4:07 PM

Couldn't agree more! I first saw Cowboy Bebop in the early oughts on Cartoon Network's Adult Swim late at night. It was the "Toys in the Attic" episode. I was immediately hooked.

Great series, great movie, great soundtrack. If you haven't checked it out, do it now!

Captian, off topic, but maybe you can confirm.

Nothing will replace Cowboy Bebop, but some come close enough to help fill the void:

Jormungand. A child soldier from some shitty desert country is more or less sold to a group of arms-dealing mercenaries who travel the globe.

Golgo 13. James Bond if he wasn't a pussy and also he was a freelance assassin and also he was the world's best sniper/gunslinger and also he never got caught up in silly sophist moral qualms. Famous for his fondness of using an M16. This is an older anime with that nice older feel.

I adopted a baby monkey after I found him on the side of the road next to his mother's lifeless body. The baby didn't know what to do and was sad and crying so I decided to take him with me and help raise him. So I decided to daily post a YouTube video of our baby monkey so everyone can see him. Here's my YouTube channel: https://www.youtube.com/channel/UCYm1jZ-9CFQD1inehrhYcIg

I regularly listen to the first and third soundtrack. The first OST is great music for just cruising around.

They borrowed off more than a bit from Outlaw Star too.

I liked it, But I WORSHIPED Ghost in the Shell.