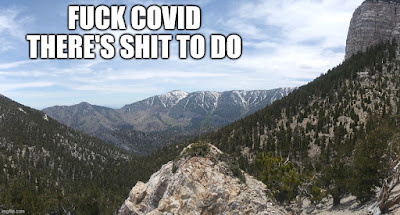 I'm trying to have a good time in Vegas and Moab hiking and ignoring Governor Walz's orders to stay home and do nothing by simply going to other states.  The plan is working brilliantly.  All I hear about back home is from dopey dumbass Minnesotans who are too sheeple to move out, ignore the orders, and do whatever they want.  But then again, they are Minnesotans afterall, the most brainwashable group of low-IQ conformists the world has ever seen.

Regardless, people's ignorance has shown me it's high time I put my hiking adventuring on hold - if ever so briefly - and provide to you fuckwits a basic lesson in economics.  Specifically bankruptcy.

Right now, one of my favorite restaurants claimed it will be going under.  This is alongside JC Penny also declaring bankruptcy.  This naturally begets screams and howls from the non-economist crowd about how bad things are and how Gov. Walz is destroying the economy.  But while bankruptcy is in general a bad thing and restaurants going under is "bad" and the people getting laid off is bad, there is some good news.

The assets, the building, the actual machinery, plant, and equipment, even inventory of these now-defunct companies do not go away.  If an airline files for bankruptcy, they do not take the planes to to Governor Walz' official "Airplane Shredder" or push the planes into Lake Superior.  These assets are put up on the chopping block, sold for anwyhere between 25% and 50% their current market value, and whatever new company/entrepreneur/private equity firm buys it starts the company anew, aaaaannnnddd....

operates at a MUCH MUCH MUCH lower cost because their capital assets (you MEFW's can look that term up) cost the new company a LOT LOT less than the company that just went bankrupt.  These lower prices actually INCREASE standards of living over time because instead of paying $10 for a martini at Pazaluna, you pay $7 at "Lazapluna" or whatever new company takes over the shop.

Look, I get it, MEFW's and all Americans who don't know the basics of economics were never properly educated in their economics class about bankruptcies or pricing.  You were all too busy learning about how "diversity is our strength" and how "the bad bad white man is what's preventing glorious communism" from being properly affected.  Brainwashing you into idiocy was the goal of the education system (which they achieved marvelously).  but try, just try, for once, to understand how one facet of economics works, in this case, bankruptcy.  And realize that Governor Walz is not shredding planes, setting fire to restaurant buildings, or melting down machinery of now-bankrupt companies.  These assets (which are the economic productive capacity of the country) still exist and will be resold at a fraction of the cost, lowering prices and increasing standards of living over the long.  And to be perfectly honest (though not Pazzaluna as it had a 22 year track record) most restaurants were going to go belly up anyway.  Just enjoy the future lower prices and increased standards of living....that is until all this newly printed money makes its way into the economy.

But that is another economics lesson for you MEFWs for another time.


Sponsored by ASSHOLE CONSULTING!
When you're done being an Economic Fuck Wit
consider getting your head out of your ass
by hiring Asshole Consulting!

Posted by Captain Capitalism at 7:43 AM

In one, small, tepid, weak defense of the MEFW's; Obama did pay people to shred their cars; going as far as destroying the engines first to prevent any makeshift entrepreneurs at the junkyard from becoming a speakeasy for used cars.


So I could understand if they perhaps might think shredding airplanes would be a completely rational and precedented thing to do.

I think this is going to burn off a lot of economic deadwood that would have otherwise spent a solid decade or longer slowly sinking into oblivion (*Cough* JC Penny *cough*). This will create a vacuum where new businesses can flourish.

Without Corona, these dead-end businesses would have limped on forever: shedding assets like K-mart lingerie, sugar-daddying ignorant investors, slutting up for private equity firms on the prowl, and finally begging for local and federal tax handouts. Newspapers would have caterwauled in mourning at the loss of yet another womens' clothing store, or a slow-casual restaurant that specializes in "Flair" and singing "Happy Birthday!"

NOPE! Begone economic thots. Don't forget to sell all your stuff to businesses who don't suck.

I've worked for large manufacturing companies that took 'underperforming' assets = paper mills, and tore them down and planted grass on the site. The best way to handle poor pricing. Otherwise, they are operated by a competitor.

While I agree, that doesn't necessitate that it will be AMERICANS that benefit. Back after WWI, a fuckload of cultural riches were transferred from the countries who were bankrupt (France, Britain, Germany) to other countries, especially America.

If America is generally broke/leveraged to the hilt, and China has the money to buy the distressed assets, we are not sitting pretty.

This makes a huge assumption: that private economic activity "naturally" moves according to least resistance, and that it will "naturally" in-fill with like-kind activity where there was prior activity of that type.

It doesn't always do this.

I remember my old favourite sandwich shop on the block going out of business. It wasn't replaced by another sandwich shop, but instead by a nail salon.

Pity too, they had really good beefy sandwiches with beef tomatoes.

The Marks & Spencer near where I lived also closed, to be replaced with ... nothing.

It's still vacant after several years.

Sometimes bankruptcy and reorganisation just leads to a lot of hard-to-dispose-of empty buildings.

That's great news! Pazaluna was not all that great for a fancy looking restaurant being their menu wasn't so great. On top of that, you had to pay for parking in downtown St. Paul.

Ahhhhhh Cappy.... The great and merciful Corona-Chan helps all!

Not long ago, during the great Corona-Chan (it's over by the way, regardless of the BS the worthless commie gubners tell you-it's been over since Easter), I came to realize that your plan of Operation Evil, was, well brilliant! Well now understanding this brilliant plan, I too have my own version of "Operation Evil". Granted, I can't call it Operation Evil, because hopefully you've trademarked that phrase (if not do so). Instead I have Operation D-GAS. D-GAS stands for DON'T GIVE-A-SHIT. My plans include to move the current command HQ to a more southern or southwestern climate. The current metropolitan area which the command HQ is located, well, sucks big camel penises, and I don't GAS about the S-birds who inhabit this area, since they have ruined it for myself and my family. Hence the move of command HQ. It will take a few years to unwind our current command HQ, but, it will be well worth it in the long run, especially for my sanity. When more and more of the metro area becomes, well, craptacular, I won't and DON'T GAS. I DON'T GAS that the s-tards who have been actively trying to destroy me won't have a job after corona-chan, you get what you vote for s-tards. Sorry, not really.

Corona-Chan, there is nothing it cannot do!

While few of us hate seeing badly run companies go under, I can say that I hate to see well run companies do so. It is discouraging in normal times. Forty percent of small business is not going to come back because there was no way to plan for something that has never happened before. There is going to be hell to pay if it comes out that this pandemic was not handled well. There will be a lot of angry employees and entrepreneurs in the streets with firebrands and pitchforks.

Does this mean that, compared to trifecta-hitting Minnesotans, Wyoming residents actually have something of which to be proud (i.e., they're neither as easily brainwashed nor as sheeplike as their Minnesotan counterparts)?

I see these companies that are declaring bankruptcy as companies that were going to fail anyway. Either they hired a bunch of MBAs that took their finances to a lean mode of operating that eliminated any rainy-day risk planning, or their products/services were tending down toward obsolescence anyway.