Why There Will Be a V Shaped Recovery

Allow me to explain to you why I'm the world's greatest economist.

It's because unlike other economists in the world I admit I don't know the answers to most things and therefore could be wrong at any point in time.

That is why I'm the world's greatest economist.

First, you have Wisconsinites flooding the bars, partying like it was 1999 once the Wisconsin State Supreme Court denied the governor the ability to extend the lock down.  There was such pent up demand that people flooded the bars at rates last seen when the Green Bay Packers won a superbowl.  And this pent up demand was directed/invested no less precisely in the sector of the economy most hurt by the Great and Merciful Coronchan - the service industry.

Second, bikes.  Specifically the lack of them.  When I went to wal-Mart to get an inner tube for my mountain bike, there were absolutely no actual bikes for sale.  The reason why is that every kid, family, and child wanted one AND HERE'S THE REAL KICKER

I don't think people realize just what a statement this is of Americans and their current mental state.  If anything, Americans are fat, lazy, slothful NPC's who want to watch their Netflix, eat their cheetos, major in the laziest of subjects, and do anything and everything to avoid labor or real work.  But they are so bored, so couped up, THEY'RE ACTUALLY GOING OUT AND EXERCISING!  You too have witness this as people are walking, biking, even working out outside.  There was even a fat woman's "zumba" class being held in a park I run around regularly.

FAT PEOPLE ARE WORKING OUT and you don't think there's isn't pent up demand to get their asses back into restaurants, bars, brewpubs and eateries?  We may not go back to GDP levels seen in late 2019, but this is not going to be some sclerotic recovery we faced under Obama from the Great Recession.

Third, Vegas.  I'm currently in Vegas right now.  And yesterday I all of the sudden noticed parking lots FULL of cars near restaurants.  I was wondering what was going on, when it turns out that Nevada has allowed for some restaurants and casinos to allow for dine in service.  And without going into a long and laborious history of the municipal economics of Las Vegas, Las Vegas is America's forefront and foremost local economy that usually tanks first, recovers first, making it America's economic canary in the coal mine.  And if yesterday was any indication, we are going to have a V shaped recovery.

I can speculate why this is.  I theorize it's because Americans have been conditioned to replace family/love with consumerism as the primary point and purpose in life.  In the olden days you'd work on the farm, eat at home, go to church, participate in the local civic organization, read a book, go to bed and do it all over again.  They didn't eat at "The Cheesecake Factory" or get hammered at the local Millennial "brewpub" to hork down wings watching "the game."  They had family, work, god, and that was about it.  But now with drastic advances in wealth and technology, a limitless number of consumeristic distractions are around us.  You need to go out night clubbing.  You need to go out for food.  You need to go out and work.  You need to go out and socialize.  Life is no longer at home with the family, it is away from the family (thus, why divorce, domestic violence, and jokes about running away from your spouse/family are on the rise).  And given how fat your average spouse, why stay at home at all?

Regardless, the whole point, purpose, meaning, and existence of Americans (as well as all westerners) is to go out.  And the service industry is what supported this lifestyle, mentality, and spirituality.  Therefore, they WILL come back in force, even if they don't have the money, even if they have to borrow it (at very very low rates I might add) because they have to. They have ABSOLUTELY NOTHING else to do in life.

That is all they have.

So do not fear.  The economy is going to come roaring back.  Because...what?  Americans are going to find purpose and value in their family, spouse and fellow man??? 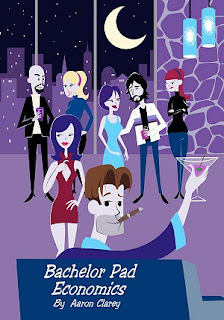 Posted by Captain Capitalism at 9:00 AM

I like your optimism and my gut is in concert with your assessment. However, there is something holding me back. Forty percent of small business is sunk. They didn't have enough to tide them over. Add to that, all the people that were laid off that couldn't get unemployment. There are a lot of them too.

I can't believe economist really this crap. And these people allegedly have education.


New threat to the economy: Americans are saving like it's the 1980s


So if I buy a used pair of leather loafers at Goodwill for $10 instead $90 at the department store I'm screwing the economy to then?

I hope you are right Cappy.

I sense it will be a WWW-shaped recovery: hold onto your lunches, the economic rollercoaster is going to be one hell of a ride.

BTW, can you ever really have enough sand bags?

The smart gremlin was right: tinned food and shotguns, that's where the action is. :-)

The Great and Merciful Coronachan has done many wonderous things, such as fully exposing many more BS-artist frauds around the world.

Cap, I tend to agree... I live just south of Vegas; and this place is beyond ready to get back into life. There are a lot of retirees here about, most of whom are still active (golf and what not) and they all would likely tell you at this point, they'll take their chances with the virus. Me? Mid 60s, type 1 diabetic - but I'm 'essential'; so I'm at work, taking my chances with the virus... I've heard speculation regarding "what happens if the .gov commands a second lockdown?"
Judging from what I see and hear around me - gunfire is what will happen.

I am still trying to process what exactly "horking down wings" looks like and what is the root meaning of the word "hork".

I'm pretty sure that "horking" is an onomatopoetic word, referring to the sound someone makes while rapidly horking down chicken wings.