If Adam Smith Was a Tailor

From InvisibleHandFashion.com!
Social Security is the largest Ponzi scheme in history. Sort of. A proper Ponzi scheme is
a fraud perpetrated on willing victims. Bernie Sanders Madoff is a great contemporary
example. Early "investors" are cashed out using the money from larger number of later "investors",
then their success stories are used to get even more "investors". People from the earlier stages do
well and people from the last few lose their hat. It's a felony in most places. In Washington D.C.
it's standard practice to get elected. 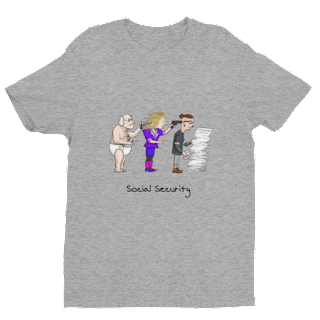 Social Security is a case of the old eating the young, enforced
at gunpoint, excused as a Ponzi scheme by beneficiaries and the more foolish victims. Of
course it will fall apart eventually; no pyramid scam can grow forever. The most unfortunate part of the
Social Security Ponzi scheme is that the first few generations to benefit got away clean. As much
as the Boomers are hated, they didn't start Social Security. They weren't even born yet. But Boomers
just may be the first generation to get screwed, and by their own votes no less. The Social Security
system is still in place, but over last few decades the Boomers have inflated the dollar so much
that their Social Security and pension checks will barely be worth enough to subsist on cat food.
(Which of course they have, being the reigning All-Time Divorce World Champions.) 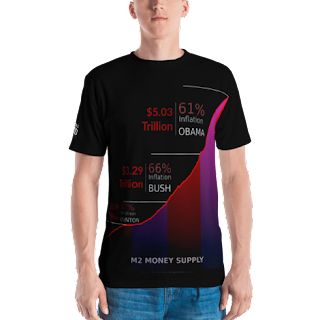 "Oh, but Social Security is inflation adjusted!" I hear you say. It's nice that you bring that up
because the inflation numbers have been rigged for decades, and it's only getting worse to hide
the devastating effects of Obamacare and the Bankster Bailouts. Beef prices will raise the official
inflation index by two cents while medical and housing prices will have silently quadrupled.
The relative weight of various commodities to the CPI are listed on page 8 of this document:
https://www.bls.gov/news.release/pdf/cpi.pdf.
Food, which as the Captain mentioned recently is nearly free, accounts for 13% of the CPI. Medical care,
which can quickly bankrupt you, accounts for less than 7% of the CPI. Rent, which has skyrocketed
in most places, is less than 8%, despite housing costs averaging 30-40% of Americans' income. The
Owners' equivalent rent of residences figure listed below, at 23% weight, is just a survey where
homeowners are asked what they feel their house would be worth if rented out. Very scientific.
So what can you do to avoid being on the losing end of the Ponzi scheme? Besides being born in 1899
or subsistence farming a remote island in Panama, not much. The best course of action is to not waste money on
worthless degrees and live minimally so as to not lose all your hard money to
parasites.
The only exceptions to living minimally are of course getting
good advice and shoving facts in the face of annoying leftists.
Thanks for reading. Use discount code CAPPY for 15% off your first order!
"Adam Smith"
InvisibleHandFashion.com
Gab: @ihf
Posted by Captain Capitalism at 10:00 AM

When Social Security was started in the 1930’s, it, and the retirement plans that followed were pay-as-you-go plans. You pay in so that the elderly in your family and other people’s family could retire. Why was this done? It was done not to be altruistic, although it was. It was done to get the elderly out of the workforce, so that the jobs they had would open up to others. This was a way to shrink the workforce. Child labor laws were enacted at the same time for the same reason. Shrinking workforce means more jobs available for everybody else and (hopefully) more pay. Getting rid of illegal aliens would serve the same purpose today.
The best reason to support Social Security is that it puts money in your elderly relatives’ pockets, and keeps them out of your personal life. When Social Security goes away, The elderly will be moving with their children and/or grandchildren or some relative or else starve to death. That won;t be pretty.