California Institute of the Arts

I had an agent send this to me.  He attended the California Institute of the Arts (where these fliers were from) and I think any young man considering this college should rethink given its politically hostile environment towards men and how "rape" is now defined as "regret." 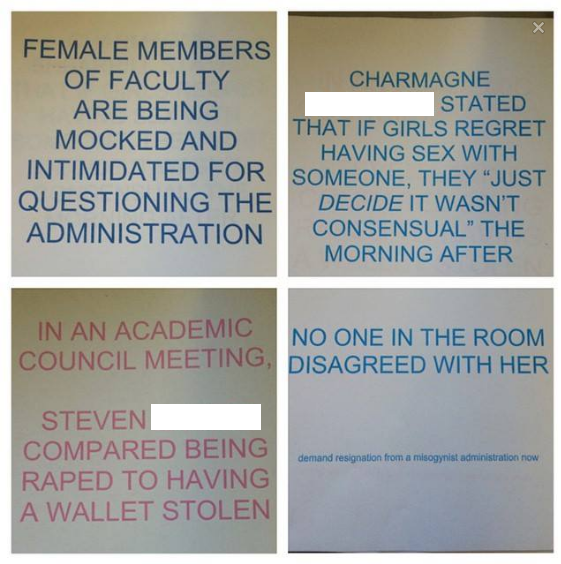 This isn't bullshit boys.  You need to be VERY WELL AWARE AND WARNED just how much of a risk it is attending colleges like these, especially in California, where they are so far deluded, so far gone, that mere "regret" is grounds for a rape accusation.

Choose schools wisely boys.  You landing in jail or having your tuition confiscated while you're expelled because you had sex with a drunk girl is just not worth it.
Posted by Captain Capitalism at 5:43 PM

I'd normally recommend that men attend only engineering schools. California's CalPoly campuses would normally be on my recommended list. But after the YMY law I wouldn't even recommend those fine institutions. Any publically funded college in California is now a legally hostile environment for men.

Attend at your own risk, with eyes wide open.

This is just a "school" thing, right? My understanding is they can kick you out of college via this bullshit law, but this can't land you in jail (yet), is that still correct?

If that's the case, I think this just incentivizes men with options to fck girls who don't go to their schools, usually via the local bar scene. And men without options will attend anyway, cuz lots of asexual young males exist in California. They were brought up to believe "go to college, study hard, get a good job, and you'll find a good wife".

"... They were brought up to believe "go to college, study hard, get a good job, and you'll find a good wife"."

They don't REALLY believe that old outdated fairy tale nonsense, do they??!
If they do, they're in for a bad time and hard lessons to learn.

At any rate, if I understand this situation correctly -- ANY male is automatically considered "guilty of sexual assult" merely by being accused, right? So if I am correct, a man doesn't even have to had sex with the accuser...all that matters is the accusation, right?

I'll bet that MGTOW has never looked so good.

Ah College, the last bastion of truly free speech... Unless you don't tow the party lines, in which case you're a misogynist and should lose everything.
Amazing how 'free' speech can cost you everything.

So basically girl goes to bed with guy. Next morning she's mocked for going with guy who isn't cool or "in", just nice and misunderstood. To avoid any more ridicule from her peers, she can just claim "rape", I guess.