Obama and the Magic Gini

Sadly, despite Obama's ideologue-strength desire to redistribute income, he's only managed to (in the classic sense) make the rich get richer while the poor gets poorer.  The Gini coefficient has been going up as it always has. 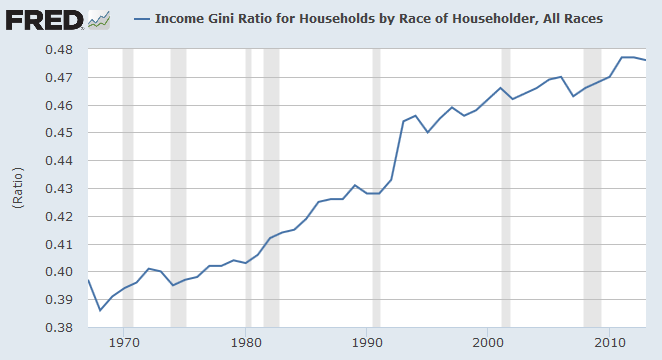 Technically that bold faced lie (the richer get richer and the poor gets poorer) is a lie.  Both rich and poor are getting richer over time.  It's just that the rich get richer faster because they have the majority of monies and can therefore capitalize on early investments in successful ventures.  But still, as a relative measure, the poor continue to lose "relative" ground to the rich.  And if you couldn't get an American-hating communist like Obama to lower the Gini coefficient, you're not going to find anyone to do it.
Posted by Captain Capitalism at 2:35 AM

In the far future, some individuals will own entire planets while the poor will be stuffed in life support pods and kept occupied in virtual reality. How's that for income disparity?

"And if you couldn't get an American-hating communist like Obama to lower the Gini coefficient, you're not going to find anyone to do it."

Hillary Clinton will succeed where Barack Obama failed. That woman has more balls than Gengis Khan.

You are going to suffer under the Hillary Clinton presidency. Poetic Justice.

George Guy that os all well and good, but who is having fun and reaping the benefits and who is not in comparison? Virtual or reality, what is better??

Or maybe Obama isn't the America-hating communist he's made out to be?

Or maybe he is, but he's actually constrained by the checks and balances in the system, and not the omnipotent dictator who has made away with the rule of law and wiped his ass with the Constitution?