Jobs In the Liberal Arts for Women 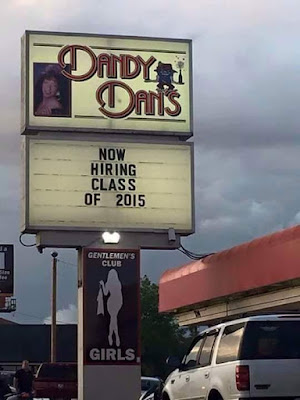 Posted by Captain Capitalism at 6:16 PM

if that's not photoshopped, thats halarious. oh hell, its halarious either way.

Probably not shopped. These days, there is training for that sort of career.

It's real, this is a strip club in my home town of Denver.

The left can and will use this as an argument to further an anti-capitalist narrative.

"Our poor girls are forced by the unjust, unequal patriarchal system to give lap dances to make ends meet!"

Captain, I bet they make more money than you do. They are busy shaking their asses to provide entertainment (economic value) to high paying customers.

While all you do is take a stroll in the countryside not doing much.

Not only are they busy earning a living by making libidinic male customers pay, they are also helping the bar sell drinks and food. They are adding more to the nation's GDP than you do with your rants, put downs and mountain-selfies.

If economics is a hard science like math, if it is concrete and real like automobile mechanics, then why don't you stick to the science and get down from your high horses.

You don't see mathematicians and mechanics chastize, lecture and pronounce moral judgements against other people all the time like you do.

Finally, if you're truly worth your grain of salt as an economist, you will admit that a healthy economy is fully diversified. If all people had STEM degrees and were crowding engineering firm's HR departments, vast parts of the economy would lack the low skilled labour required. The economy would not be healthy.

Go ahead, bury your head in the sand, change the subject, go ahead with your ad-hominems and call me a mentally defunct court-jester all you want.

YOu're right. They do produce more and help out this economy more than me. They also likely work harder.

Now why would I give up my days gallivanting around the mountainous west, riding motorcycles, and ranting on the internet to take a real job again?

You have fun in your cubicle for the next 20 years.

From Anon's post, I can only conlude they desire a lap dance from CC...