For the French Protestors

I made this post quite some time ago when the students protested the French government passing legislation that their students pay for their own lives. Given the resurgence of protests because (OH GASP) the French taxpayers shouldn't pay for livelong retirement for lazy government workers, I thought it apprapoe to remind them of their own idiocy.

Are you a hard-working business owner looking to expand overseas?

Looking to tap that lucrative Euro market and it's potential 500 million customers?

Do you need labor that is not only loyal, but highly trained and skilled?

Yes, France, where the future hard-working leaders and workers of France pummel journalists for their camera. 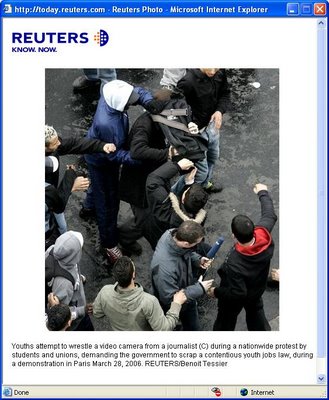 Where future workers know how vital it is for an economy to distribute goods, services, products and labor efficiently 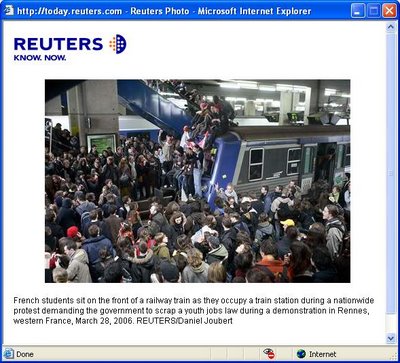 Where your future employees will hurl crap at you 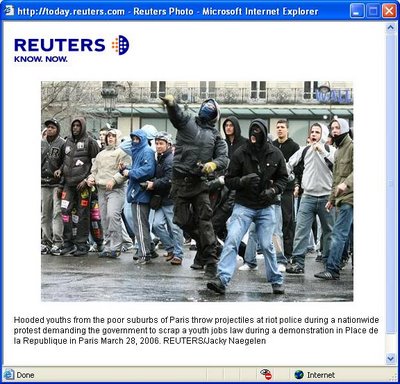 Where the youth are trained to be mature, respectable representatives of your company 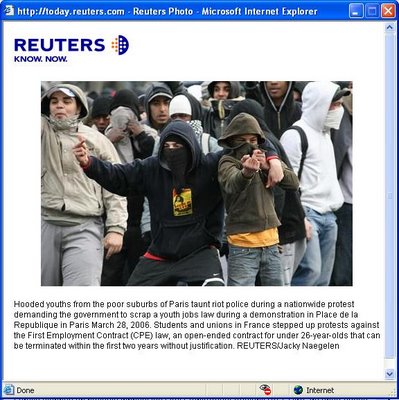 Don't go to other countries where their labor is so predictable and cheap. 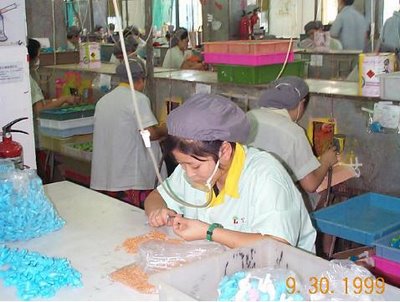 Go to where all spoiled brat American girls who have not a freaking clue as to how the real world works and people with not the slightest ounce of economic sense want to go!

Posted by Captain Capitalism at 11:08 PM

The Captain is in top form with this one.

"Go to where all spoiled brat American girls who have not a freaking clue as to how the real world works and people with not the slightest ounce of economic sense want to go!
THINK FRANCE!!!"

Hahaha! That one made me laugh for a while. It's funny because it's true.

I agree Derek - this was vintage Captain.

WorkersWorldOnline had a nice article about the rioting youth in France last week, I was kind enough to demolish it.

why is all this so obvious to us and so hard to beat into those dumb socialist skulls?

Now, there is a special hell for people who defend France. (It may, in fact, be France. Small coincidence it was a Frenchman who observed that 'hell is other people.') And, God help me for stepping into it. But, here's my point-by-point rebuttal to each photo:

2) Well, clearly they _do_, otherwise this would be a sort of useless strike, like UC Berkeley undergrads walking out of classes t protest something. I'm sort of heartened to see a student protest actually, y'know, doing something.

3)Your statement is only correct if the youth in question want to be police. In which case, excellent, great fuckin' training, after all I imagine the police could throw shit back. I hope it's a tear gas canister he's throwing, that's good experience.

4)The people they're flipping off are, in fact, journalists. See point #1 (and actually, if you think about it, #3 -- again, good training for the "reporter" job).

5)Inspired this post. Really that caption you put on it is kind of a low shot, dude. Shame on you. Not clear there's a racial thing going on here.

Actually, incidentally, I think the mainstream (and right-of-center) consensus that de Villepin is basically right (that should give you pause right there!) in giving employers flexibilty, and the students are economic morons, is wrong. It's true that unemployment in France is terrible in part because of extravagant protections for workers and there's a general consensus that those protections particularly hit certain classes of worker -- like young ones. But it's not 100% clear that one solves that by preferentially discriminating against young workers. Furthermore certainly another repulsive aspect of the French system is the bizarre "two-tiering" of workers: those with full and ridiculous benefits mandated on the backs of the employers, and those with few benefits, creating pervese incentives for employers in how they retain personnel. De Villepin's proposal to extend and complicate that "two-tiering" seems on the face of it silly. Yeah, employers in Europe need more personnel flexibility. No, this doesn't give it to them, not how you want.

Which is not to say the students aren't in general economic morons. But, stopped clock twice a day and all that.

I'd kind of felt like the Captain had been churning out some rough pieces of late, like maybe he's been under a lot of stress. But, this here post is quality Truth. This is the kind of post you forward to all of your friends.

This is the kind of post you forward to all of your friends.

It sure is, i'll post it on http://franksemails.com/ tomorrow :)

I believe it was Mark Twain who said "France is a miserable country because it is populated by Frenchmen. And Frenchmen are miserable because they live in France."

The irony in all of it is that if the students knew what was best for them, they'd fully endorse the CPE.

That's an awfully big "If," captain - in a society where entitlement and socialism is everywhere, it's hard to overcome.

I still say, it's tough to imagine a business environment where it could possibly be harder for educated people got get a job. That alone ought to induce them to say "Something needs to change."

Unfortunately, Socialists affect change through the strong arm of bureaucracy.

What bollocks ..
You wouldn't be american would you by any chance?
Speaking of future employers, you seem ready for a job at Fox News..
And socialist? You realise the last presidential elections were between right wing and extreme right wing candidates I suppose?
Stick to US foreign policy, bombing for oil & supporting Israel, and steer clear of European issues that you obviously don't understand.

Amazing how I don't have to say anything in response to this guy except for;

yes but you should probably start to stop resting your brains and be less sure of yourself, start questioning your logic, start doubting. Saying "it is so obvious to us, but i can't explain it to you ignorant europeens" means you haven't understood it at all, and you are merely beleiving blindly just as a religion...

Yeah, I was a bit confused there too.

If you mean that I should try to understand the otherside, yeah, I do. I went to college and listened to the elementary 3rd grade logic to the rationale for socialism.

In the meantime, actually, the cunningness of my ideology is in its simplicity. I really don't use my brain at all to ponder things or be philosophical about it.

I just look up the data. Find out what the facts are. And argue nothing but the truth.

Thinking has nothing to do with it.

And why I'm sure the old school Europeans are subscribing to some sort of logic, I think they're like their American collegiate counterparts, they never bother to look at the stats and facts before they form an opinion they're willing to not only riot over, but piss their life away slaving away to a faulted ideology. It's not until a soviet style economy comes crashing down on them do they bother to look at the facts...but by then it's too late.

Regardless, France will still suck and people can yell at me all they want, but that doesn't change the fact that it's true. France will continue to have 10% unemployment and lethargic economic growth. Cursing at me saying I don't understand nothing about Europeans and I'm a blundering American (although one musn't underestimate American blundering) isn't going to change that fact.

I actually have a bit of empathy for the kids.

Yeah, I agree that the current "job for life" system is essentially nothing more than a gunshot-to-the-foot of every business owner in France.

Though, that clause in the CPE that allows any worker under 26 to be fired at any time, and without cause during the two-year "trial period" is stretching the line a bit. With the youth unemployment the way it is, it's hard to imagine any employer not abusing the hell out of the privelage.

Though, with the proposed reforms for the law (can still be fired at any time, but there has to be an actual /reason/), I support it.

This time you got it hilariously right! Oh and I think I want to go to France, fake a good french accent and hit on the American girls...oh la la...

What a load of bollocks!!
You guys have seriously got nothing better to do than get on your high horses and look down your noses (not to mention talk out of your backsides..)???
I can't believe I even wasted my time getting to the bottom of the page.