Was Surprised with These Stats

I figured an interesting chart would be the number of houses per person in the US to get a gauge as to how much inventory would have to be sold off to get back in line with historic averages. But the data surprised me in that houses per person, while near the peak is not at a record, nor terribly out of line with the past 15 years. 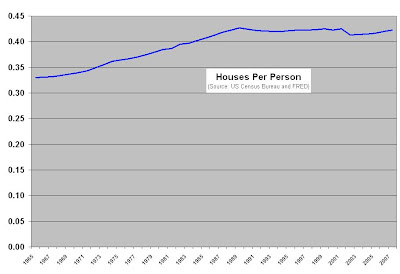 I thought that maybe the definition of a "house" according to the Census Bureau would mean only single family homes and not include town homes or condos, but after looking up the definition on the report it does.

This runs contrary to the bevy of other statistics out there that measure the supply of housing, namely "month's supply." But it reminded me of what my realtor pointed out to me one time, that "month's supply" is the current inventory of houses for sale divided by the previous month's sales, resulting in how many months it will take to sell out the current inventory. And while everybody focuses on how much housing inventory is sitting on the market, not a lot of people look at the denominator of the formula which has been precipitously dropping.

In other words, "supply" as we traditionally have measured it has gone up, not so much because there is a lot of new housing being built (though that is certainly the case) but because sales have dropped so much, decreasing the denominator of the formula, thereby increasing the "supply" of housing. Meanwhile relative to the population, the current housing stock of the country is not terribly out of line.

This leads me to believe that my realtor is right on another point. That when housing sales recover, even modestly, this will have a dramatic effect on the month's supply of housing and the housing market, when it does, will swing back to a balanced market rather quickly.

That is of course assuming we avoid a recession. Heh.
Posted by Captain Capitalism at 10:15 PM