Remittances as a Percent of GDP 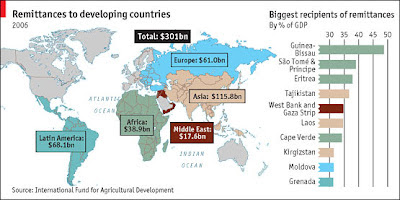 I found it interesting that some countries are so poorly managed that those people who have emigrated from those countries are able to supply nearly or over a third of the countries' GDP through remittances.

That being said, remittances are supremely superior to foreign aid. The money is sent directly to the people, directly sent to the market, needn't go through a bureaucracy such as the UN and thus actually might get something done.
Posted by Captain Capitalism at 9:18 AM

Oh yeah Frank, because UN money never ends up helping evil bastards, right? Remember the Oil for Palaces deal? That worked out just great. The whole reason these places are in such trouble is because they've got freaking tyrants in charge in the first place, and sticky fingers seem to come standard with those guys.

I was thinking more along the lines of Central Europe and Latin America, but yes, I'm thinking the majority of dollars entering the Gaza strip aren't exactly all going to afford relatives college expenses.