The Banks Shall Pay

It is now almost a daily occurence where I either hear, see or actually have to deal with some middle aged guy who just doesn't get the fact that the housing market is crashing.

Be it a real estate developer proposing adding another 300 condos to the already over saturated 6,000 condos in the Twin Cities market or a banker salivating over the commission on a $10 million real estate deal that will heap further glut to that endless sea of oh-so original gray, vynil sided suburbanite twin homes, there I sit, looking at people asking me to recommend giving them other people's hard earned money for a frivolous and stupid real estate deal that has about as much chance as getting paid back as me getting with Selma Hayek. And I often opine, cynically, that they know full well they can't pay it back and that they know full well the deal is crap, they're just trying to keep the cash flow going so they can drive their BMW and continue living in the McMansion without having to actually take a real job.

But what I'm amazed at is the pressure to "find some way" to make these zombie deals get approved. The political pressure in the banking and financial services industry to at all costs, keep the party going like it was 2004. Forget the quality of the investments, forget the probability of getting a decent return. We need the volume, we need the sales, profits be damned.

Ah the joys of having commission based compensation.

But I'd be curious to hear from other economists, analysts, researchers and other professionals in between to see if they see the same thing. To see if I'm the only one standing there saying, "hey, the emperor has no clothes on" or if this is prevalent throughout the industry.

Alas, I feel all I'm relegated to do is keep posting hard data and stats to chronicle my criticism so that some day, some day, higher ups, people in power will look back and say, "gee, if we just would have listened or hired out an economist, we wouldn't have lost those billions of dollars in the housing market." 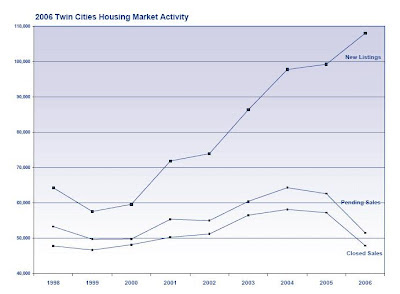 Sadly, the banks shall pay for their ignorance.
Posted by Captain Capitalism at 11:07 AM

Bubbles are usually only recognized in retrospect (this may be an exception, of course); since I'm currently away from my sources, I can hit you with some stuff that, frankly, you should have read for yourself when I loaned it to you.

Of course, it wasn't in pop-up form.

The Economist among many other publications and economists had this bubble ID'd back in 2003.

I just wonder how many billions of dollars would have been saved if anybody had bothered reading The Economist or listening to youngerish economists without gray hair.

Sickens me how inefficient this market is at times.

To be fair to myself *chuckling*, I did say "usually", but I will accept the word of The Economist.

Given how much of the current economic situation is based on housing growth/trends, a couple of questions:

1) Just how badly will this affect the economy of the country as a whole?

2) Given the general economic ignorance of the American public in general and the press and politicians in particular, and their desire to "do something" with the power they wield, do you foresee Dire Consequences for what remains of the once-proud Free Market beloved of the American Republic?

3) Given the various measures in place to make certain banks don't actually lose their shirts on asinine deals like this (which is really too bad, IMHO), do you think a major overhaul of the banking laws a la Hong Kong back before it was absorbed by the Communist Monolith that you seem to praise is is order? *yanking (is that a city in China?) chain slightly*

The Cdr, who is also waiting on a phone call