How the Brits Will Stop the Housing Crash

Normally if somebody came up to me and said, "hey I want to build some condos in Florida, what do you think?"
I'd say, "Go to the credit unions. They're wanna-be banks, and stupid enough to loan the money to you."
However, I have to hat tip it to some savvy developers who realized while demand in America for American property is all but satiated, demand for American property by FOREIGNERS is not.
Particularly the British.
Brits, generally like America. They speak the same language. We're from the same stock and they do vacation here. And well-to-do Brits who make the jump to the US are starting to demand a "cabin" in the colonies.
But there are two things playing to their advantage;
1. The Pound has increased 20% against the Dollar in the past 5 years making US property more affordable 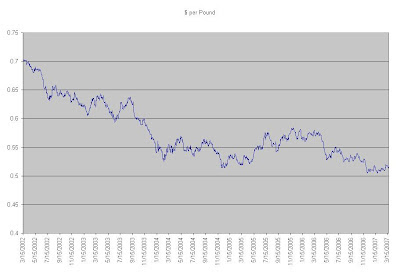 2. (And although I don't have this confirm) the British are allowed to withdraw, tax and penalty free, a certain percent of their pension for other investments. Property in the US presumably qualifies.
This, no doubt, would be viewed by most overleveraged Americans as a good thing as this additional demand would increase the value of their homes.
My question is how many of those same Americans ignorantly blather on about the horrible evils of globalization.
Posted by Captain Capitalism at 4:16 PM

"They speak the same language."

Actually, they don't. As the saying goes, we are "two peoples separated by a common language."

My first trip to London the taxi driver welcomed me and told "We speak English." He lied! Or maybe it's us who speak American and call it English.

I don't think the Brits are going to stop the housing crash, even if they buy a huge amount of real estate. Developers still haven't figured out that building more condos is a stupid move at this point, and the only way they'll learn is when the market absolutely implodes all around them and they lose everything.

The Brits buying houses over here would only delay the inevitable crash and encourage idiotic developers to build even more. If they buy enough to keep housing prices level (or even increase) then jubilant developers will proclaim that there was no bubble at all and that they were right to keep building as much as they could.