The Economist came out with a pretty good article about the effects of offshore tax havens and their effect on globalization (it was also written by I believe a knock out, stunning babe). And I'm a big proponent of tax havens (and stunning babes), not so much for their low taxes, but the fact they force governments to compete and to be efficient. Ideally a democracy would have an educated population that would insist on governments being efficient and expeditious and would therefore vote fiscally responsible politicians into office. In reality it's the fact that the US, all of western Europe and all of the developed world's governments can't jack up their taxes to confiscatory levels because the majority of their wealth would flee to lower tax countries (Ireland being a perfect example of this).

But what I did find interesting is that despite an overall lowering of the effective corporate tax rate, corporate taxes as a percent of GDP have been going up. 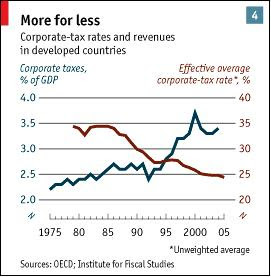 They chalk this up to, in part, better collection, but also the fact that lower taxed countries tend to grow faster and attract more investment, resulting in a larger corporate tax base, which rises corporate tax revenues even relative to GDP


I like it just in the fact the chart is bound to piss off leftists.
Posted by Captain Capitalism at 12:48 PM

Stunning babes have lower taxes? Fantastic! If I didn't have 5 kids I'd divorce my wife and go marry a stunning babe! Who'd a thunk they'd be good for taxes too?
--Bacardi Breezer.