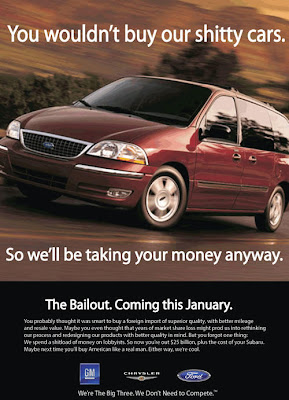 ht Kate
Posted by Captain Capitalism at 10:01 AM

Nine out of the top ten most stolen cars in America are American brand:

Which of these do you think explains this phenomenon?

1. American cars are worth more chopped up into replacement parts than they are as cars.

2. They have poor security systems.

4. The Titanic Three are stealing them back to restock their inventories and save on production costs.

I'm going to go with the poor security system?

I don't know, I'm just genuinely curious as to why that is.

Crap. I knew I shouldn't have bought a Charger - it's in the top 5!

Then again, I'm in Canada ... hopefully our stats are different ...

Anyway, most likely explanation is that American cars make up the largest percentage of the vehicles on the roads, so it makes sense that they'd be stolen most often. Moving parts through chop-shops would probably be a lot easier too.

Lastly, if you look at the list, most of them are pickups and SUV's, which goes a long way toward explaining why no Japanese cars make the top 5. I think what you have here is a case of mistaken causation.

How about that theory that thiefs are lazy people. That would mean that they steal cars in their neighbourhood, which is presumably rather poor, and where therefore people own cheaper American cars.

It's times like these that I wish blogspot had those little eye-rolling emoticons :)

I'd wager that american cars fall apart more so there's a bigger demand for replacement parts.

Awwww... I was going to send you that picture, but Kate beat me to it.

On the bright side, the bailout died. For now, anyway. Hopefully for good.

"How about that theory that thiefs are lazy people. That would mean that they steal cars in their neighbourhood, which is presumably rather poor, and where therefore people own cheaper American cars."

Alex, I think dtum almost stumbled onto the truth here. Poor neighborhoods are where you always find the EXPENSIVE cars that are status symbols to young, urban males - a demographic prone to crime. These expensive "macho-man" vehicles are disproportionately American. Notice how Hummers, Escalades, Chargers, & Durangos all made the list. I can't count the number of times I've gone to an area where Blacks, Hispanics, or poor Whites live and seen late model versions of pricey American cars. Many urbanites are happy to live in squalor & without steady employment as long as they have the right clothes and the right wheels (generally purchased on credit).