GDP growth is volatile and chaotic; 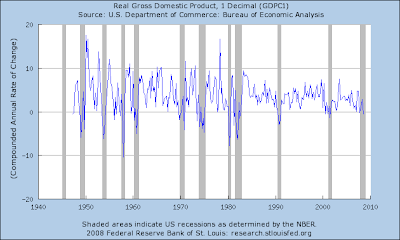 But if you smooth it out a bit, a disturbing trend is showing and that is, over time, our long term economic growth rate has been decreasing; 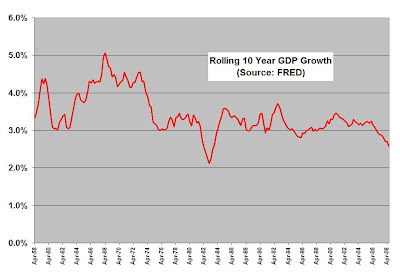 People ask me what I think is going to happen in the future, and then when I tell them, they all poo poo me saying, "Oh Captain, you're so pessimistic." "Oh Captain, why do you have to be cynical."

So allow me some of my insights.

One, I'm rarely wrong. Matter of fact (and arrogant as this may sound, it's true) if the blue blood Ivy League loser ilk had listened to this dumb fly-over country hick graduate, they wouldn't be going to the taxpayer with a cup in their hand, let alone be looking for a job today. I predicted this housing market crash (along with a million other people), the stock market bubble, the Asian currency crisis, and the collapse of the Suharto regime (never mind, long story, back in my youth). So when I predict a slow degradation of the US into essentially an English speaking version of France and an utter financial and economic collapse under the weight of the baby boomers retiring/social security/medicare, maybe, just maybe this once you ought to listen to me.

Two, without economic growth, let alone the hope for future increases in economic growth, the present value of today's assets are going to drop or at least not go up. I know people on Wall Street and people who rely on increasing asset values for retirement like to hunt or look for reasons for their assets to perpetually go up aside from profit, but with the backdrop of slowing economic growth, it is unlikely, assets as a whole, are going to go up, unless you have some kind of phenomenon contributing to an asset bubble (lower interest rates, the trend to throw trillions into 401k's, tulip bulbs, etc.).

Three, recessions are a good thing, damnit. I don't know why we try to avoid them all the time at the expense of compromising our future economic growth. Not only did we have higher average economic growth in the 40's and 50's, it was more volatile, resulting in more, but briefer recessions. This was due to the government not trying to impose a Keynesian interventionist fiscal policy every time the economy got a sniffle. Now bailout this, bailout that, Fed Funds rate lowered here, loan package there, Stimulus Plan I, II and III. Instead of letting resources reallocate efficiently and rapidly, we now prefer long, dragged out, dulling recessions or periods of lackluster economic growth. Anything, ANYTHING to avoid two successive quarters of economic decline, because we know that is just an unacceptable economic fate.

In any case, there's more economic data suggesting a collapse in the US. I have tons of it. And I doubt I'm going to be proven wrong. But if it's anything like the housing crash (or the stock market bubble, or telling a large bank here in America Indonesia would fall) getting the morons in the financial markets and financial industry to listen will be an impossible task and, ergo, why I'm simply just going to be recording it here for anybody willing to pull their heads out of the sand.
Posted by Captain Capitalism at 7:45 AM

I don't think it would be possible for me to agree more.

It would be interesting to see this graph from, say, 1880 to today. It's also interesting that the drop in growth comes pretty much with Roe v. Wade. You comment a lot about how our society creates disincentives towards marriage and childbearing; well, here is Exhibit A, no?

Now I'll grant that there are any number of other factors that are involved here, including Nixon's NEP, the Great Society's "War on the Poor", and leaving sound money behind for good in 1973.

But still, I think you've got to look at our nation's war on the family (no fault divorce, AFDC, abortion, etc..) as one culprit.

Great, but pull our heads out of the sand and do what though? Those of us who aren't in politics or finance, I mean.

Thumbnail sketch: single woman, late 20s, finishing up a mathematics PhD. No investments, no assets to speak of (a car back home, bit of savings), but no debts either. I'm from the US but living in Europe now. Look for a postdoc position over here, back in the US, or abandon thoughts of a research career?
I've a horrible sinking feeling you're going to say the latter...

De-lurking by the way. :) I'm a great one for facing trouble with your eyes open and all that. Keep up the good work.

Agree with everything you say....but, what does the typical recession-accepting asset builder do for investment and wealth creation from now on? All the rules have changed from what we've known in our lifetime.

In fond memory of Professor Vernon Ruttan, U of MN. You were an amazing teacher.

The problem isn't so much bad economics with all the fiddling the government does, as it is bad politics. The 1981 recession happened with no election on the horizon, so it could be dealt with reasonably. This one happened just as an election approached, which caused panic in D.C. Ergo, this one will be baaaaaad...

Look back to the pre-Fed days. Every few years there would be a "panic" where the economy would contract for a short time, then proceed on its way. Once the government started meddling in a big way, you had big recessions, including that mother of all in the 1930's.

Amen - the problem is, not many people want to hear the truth. Especially if it requires sacrifice of any sort on their part. It is amazing how quickly people disappear when you start speaking the truth, instead of telling them what they want to hear.

What do you mean by a "collapse"? Can you quantify that in terms of the Dow? And for how long? Inquiring minds want to know...

For all of those asking "what to do" here's what actionable items you can take;

1. Invest overseas. Have a diversified portfolio in countries aside from the US. China, India, former Soviet Bloc, etc. Just because the US doesn't want to work doesn't mean the rest of the countries don't want to work either.

2. Don't have children. Children cost money and impair your ability to study and advance yourself in a career. If you plan to stay here in the US and at the same time instill any noble work ethic in your children, you're basically creating a slave for the rest of society to parasite off of.

3. Don't own property or anything that can be taxed/confiscated by the government. This is difficult to do, but rent things, don't own them.

4. get the best education in the sciences you can. None of this philosophy BS or "journalism." Computers, engineering, something that can give you a skill that should you need to you can find employment outside the US.

5. Oh, I got your #5 right here. Been working on it for quite some time. Brilliant is what I would consider it, but I can't tell you just yet because I don't want anybody else getting the idea.

Oh, and I forgot

Can I rent your book?

Three, recessions are a good thing, damnit. I don't know why we try to avoid them all the time at the expense of compromising our future economic growth.

Truth spoken. I would like to read this sentence in tomorrows news headlines all over the world, so that all the retarded politicians and bankers finally get it.

One more thing, concerning the policies in the '40s and '50s. Of course there were no interventionist governents, but, surprisingly, the Federal Reserve pursued a policy of drastically lowering the funds rate into negative real terms in order to help stimulate the economy. The policy was very similar to that of Greenspan and Bernanke.

If you won't believe me, read the works of Christina Romer, the new Chair of the Council of Economic Advisers under Obama.

I know I know, it's Berkeley, and she's working for Obama. But her work about historic macroeconomic policies is rich of useful information. I also recommend her work "Macroeconomic Policy in the 1960s: The Causes and Consequences of a Mistaken Revolution" for everyone who's interested in the beginnings of long-term deficit spending.

Correction Cap'n. You said "because we know that is just an unacceptable economic fate."
It should read "because we know that is just an unacceptable POLITICAL fate". Politicians run for election every 3 years (yes I know it's 4, but they always start early). The politicians interfere in the economy and the market because they fear becoming unemployed and losing their power. Wasn't it a Clinton aide / advisor who said "it's the economy, stupid!". And it is. The incumbent politician or party will be unelected if the economy is bad and reelected if the economy is good. I'm not saying it's right or wrong, I'm just sayin' it's a fact - people vote based on their own personal financial security and blame it on the politicians.
-Bacardi Breezer.

I thought the big surprise for #5 was going to be buying your book. :)

I'm with you on this one, Captain. We're boned, and we can't do anything to fix it because the overwhelming majority of Americans wouldn't know good economics from a hole in the ground, politicians capitalize on this ignorance to advance their own positions, and the Baby Boomers are going to drown us all to keep themselves afloat.

I'd like to add to be careful where you invest in other countries, though. Some (like the UK) have proportionately much bigger bailouts than us.

Anybody want to rent my copy?

Anyone interested in how government charlatans in collusion with financiers and corporate thugs gerrymander and pollute the markets, take a gander at this essay by Catherine Austin Fitts


After reading this I'm seriously thinking of sinking my life savings into very rural farm land and plenty of ammunition.

Good luck eating after Social Security collapses and you're too old to work. I realize the incentives are all wrong for family life these days, but it is yet the only real retirement plan that will work. Saving doesn't do squat if there is no next generation.

Good luck eating after Social Security collapses and you're too old to work."

Actually, how often do you think economists retire because they are no longer able to continue working? Oh hey, Anna Schwartz is still alive and working, and she's 93. The Captain's probably got a few years left in him.

gdp growth is slowing, but it is also becoming less volatile, as the graph shows.

also, when the log (gdpgrowth) < log(debtgrowth), you're not going to repay that debt.

Keep in mind, Ryan, that my children will be:

A. Younger and probably stronger than you.

if I have anything to say about it. My daughters are already asking for guns for Christmas.

In other words, don't count on eating the people you'll need to empty your bedpan when you hit 85.