Promiscuity, measured as how casual sex is perceived by the interviewees as well as how frequently they've had sex in terms of one night stands and whether "love" was involved or not was recently ascertained by a survey. Those scoring low were the most "promiscuous" and those scoring high were the least. 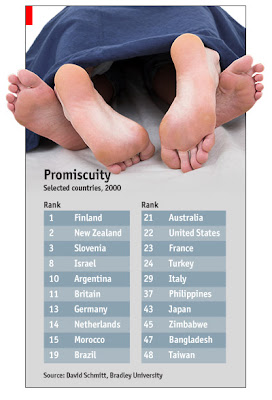 It does not surprise me that for all Hollywood portrays the US, we are some of the most stuffy, anti-sex people on the planet...though this could just be the fact I live in Minnesota where sex is largely regarded as a regrettable means/chore by which to keep the human population going.
Posted by Captain Capitalism at 1:57 PM

Americans anti-sex? Then explain to me why our nation beats almost all of those "promiscuous" European countries in its birthrate.

Put differently, I don't have a full minivan because my wife and I don't enjoy sex! We simply prefer NOT to experience the "joy" of worrying about whether our partners are carrying a gift that keeps on giving.

Sooo... Captain, are you planning a trip to Finland soon...Jep?

I don't know, Cap ... none of the American girls I met seemed to be "anti-sex". Maybe they just need a Canadian to motivate them ;)

RE:Alex: The chart does not make reference to any age- or religious-involvemet- segregation in those surveyed. If it had been broken down by those measures, I'm sure you would find that there are substantial demographic groups where the promiscuity can compete with Finland.