The Problem With Quants

"Quants" as they are called, are basically economists who are mathematicians and think everything can be modeled using math and computers. And while certainly they do amazing work, there is one fundamental flaw with quantitative analysis and that is they're using math to predict social beings called humans.

If humans were robots or planets or something else that operated according to physical laws or principles, then quants would be right 100% of the time. They could predict human behavior, schedule it actually, and predict everything that would ever happen. Quants could also go so far as being able to predict girls and figure out what they want.

Obviously, this is impossible.

And the reason it's impossible is because humans are not robots. We change our minds, and without rhyme or reason half the time. We don't abide by hard and fast laws like gravity and physics, but are inherently chaotic. Ergo, developed the most advanced model in the world, it will still, inevitably be wrong.

This is why I like to approach economics for what it is; an art.

Economics is really more like "The Force" than it is some kind of engineering program. Many commentators and economists I've spoken with lament how the profession has more or less become a math degree tailored towards economics, and not a study that accepts there's some aspect of art to it. That so much emphasis is put on statistics, math, econometrics and so forth, the economist loses the forest from the tree and thus develop models that failed miserably to value securities such as CDO's, SIV's and other mortgage related securities.

Now, most quants know that the whole world can't be modeled. They know the limitations of their models, but then you get some die hard quants who never bothered to take an independent thought in their lives and really think that unless it runs through a statistical analysis program and shows a correlation, then it's worthless.

I had a quant berate me for saying housing starts predicted spikes in unemployment 6-18 months in advance. I based it on a chart showing housing starts and unemployment where, reliably, as housing tanked, unemployment would peak 6-18 months later. He, however, ran it through a statisical program (I forget the name of it) and said there was NO statistically significant relationship. That I didn't know what I was talking about and blah blah blah. So naturally when unemployment started its most recent exponential growth upward, the drawbacks of being a head-in-the-sand quant versus a Jedi Master made itself painfully obvious once again. 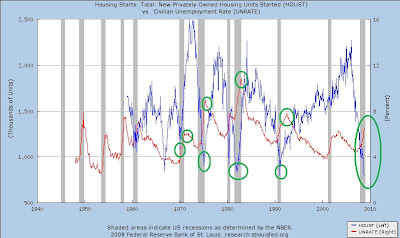 Now, as regular Cappy Cap readers know, this is one of my favorite charts, but it shows you a very important lesson about economics and life in general; just because you aren't a professional NEVER question your own eyes. The professionals can be wrong and frequently are. And the more you treat something that is indeed an art like a science, the worse you will become at predicting it.

Just ask quants how many models they have that have helped them land dates.
Posted by Captain Capitalism at 7:45 AM

I was an Econ/Math double major and you're definitely right. Before graduate school in Econ, it's almost better to study all math and pick up Econ as you go along. There was at least one Math PhD as a professor in my Econ Department. It's becoming more common. Ironically, we're seeing more Econ Ph.D.s in Geography and the "softer" sciences of Poli Sci, Sociology, and History.

I much prefer the elegant, intuitive arguments of Hayek, Rothbard, Smith, Marshall and even Keynes. The problem with verbal arguments is that logical fallacies are obscure and rigor is often absent.

On the other hand, assumptions in mathematical models are usually not plausible in the real-world; they're often used just to make the math tractable.

Empirical work is fraught with problems, not the least of which is faulty data collection.

"You can use all the fancy- schmancy parametric and non-parametric statistical techniques you want, but always remember that the data is collected by the village watchman who writes down whatever the hell he wants."

No quants that I know of predicted this crash, but we EconoPsychics saw it coming five years ago.

Your intuition on housing and jobs has a strong proponent. Read Edward Leamer's paper, "The Housing Cycle IS the Business Cycle."

Everyone should read it. Then they'll realize why Clinton's "affordable" housing policy is center-stage in the current crisis.

I agree, though I think some outside respect for economics lies in it being mathematical rather than voodoo.

I recently listened to a podcast with Tyler Cowen where he speculated that economics and some other social sciences shouldn't really be differentiated the way they are. I believe he said subjects like social psychology, neuroscience, and behavioral science can all be one with economics. Total indistinction might be taking it a little far, but there is definitely a lot that economics has to learn from soft sciences.

I don't really believe in "happiness" research and I don't think we'll ever quantify utility, but understanding the motivations people have outside of maximizing profits and whatnot is going to be very important to economics in the future.

Sociology as it was when I took it in school seemed completely unimportant. However, mixing some sociological ideas with economics can probably yield some much better explanations for economic behavior.

"Quants could also go so far as being able to predict girls and figure out what they want.

Obviously, this is impossible."

This reminds me of one of my favorite jokes:

There was this biker dude, who was full of faith, and spreading "the message." One day, God visited him and said, "You have been one of my best disciples. You have gone above, and beyond, and I want to repay you. I want to grant you one wish."

The biker thinks for a minute, and says, "I love riding my Harley. And I've always wanted to visit Hawaii. I would love a bridge from the California coast to Hawaii, so I could ride my beloved Harley there."

God thought for a minute, and said, "That's an engineering nightmare. Getting the project started is a case in futility on it's own. Is there anything else that you want?"

"Do you want that bridge two lanes, or four?"

I think Robert has nailed this one directly.

The tendency to try to model everything and use statistical correlations in place of rationally trying to explain how things work is part of the reason why I find the Austrian school so refreshing.

While I think that there is a place for empiricism in getting a general grasp on how quantitatively significant a theoretically significant factor may be at any particular time, (which would mark me as a heretic to the purely Praxeological Austrian orthodoxy) I also think that people tend to rely on math instead of reason far too often and that math can never substitute for understanding.

It's probably only a problem of defining the relationship between housing and unemployment. You can see that housing even goes down during times of employment expansion, but it starts to fall off dramatically when the recession starts. Your quant is a total failure in his job if he didn't recognize that problem. Of course, in most cases you only need one healthy eye to see such relationships.

Coming from someone w/a background in psych but an informal intrest in econ...

It's appealing to connect economics with psychology, but I've yet to see a convincing argument that the 2 areas are related. The underlying reasoning is similar to that used connecting medicine & psych: We're dealing with human behavior, there's an aspect we can't explain, maybe psych has an answer. Not to say that psych never has an answer, but this reasoning has led to widespread myths connecting ulcers with stress, personality types with heart attack risk, schizophrenia with cold mothers...all of which have hindered science & harmed patients.

Econ as I understand it is the allocation of scarce resources. The resources are being allocated to, by & for humans, but that doesn't give human behavior (or more broadly human preferences & psychology) an unlimited role, just as agriculture is to, by, for humans, but not about human psychology.

Personally I suspect that psychology maybe most relevant when it comes to basic human motivations - altho this would be a very fixed factor - and perhaps as a more variable factor in societies that are wealthy enough to indulge in passing fads.

As for stats, the worry is in oversimplification, be it towards oneself or to the public.

See folks, this is what I have been saying all along; that economics is much more a technical art and that those without econ degrees can sometimes have more common sense than the professional economists.

Econ has been described as "common sense" made difficult.

There are, however, paradoxes in Economics that common sense simply will not reveal.

Then there is outright denial. People who have had Economics still don't buy that minimum wage laws create unemployment. I have two cousins and an uncle who are union iron workers. You try explaining to them that they are overpaid!

BTW, in the days of Adam Smith, Economics was called Political Economy. In the time of St. Thomas, Economics had no name and it was just a topic of Philosophy.

Math, Economics, Philosophy, Physics, Biology, Chemistry and Religion were all one science.