This, among a limitless number of other examples, is why I view global warming as nothing more than a political scam of the most evil politicians to brainwash people or backdoor them into hating capitalism. Countless stories like this one about how there's so much less ice up in the polar caps. But then when you look at the actual data; 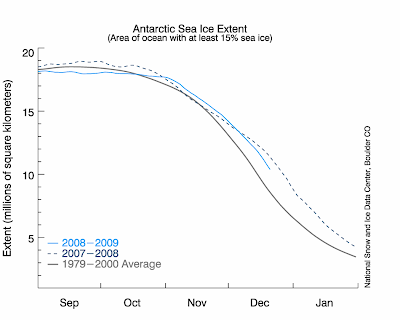 Oh, heh heh. Well we meant well, and well um, gee, you know uh this one village in Alaska had to move due to the lack of frost.

Meanwhile it's 20 below the average temperatures here in Minnesota and we're suffering one of the coldest winters in the past 20 years.

To all the global warming conspirators out there, go ef yourselves.

ht to Kate.
Posted by Captain Capitalism at 11:06 AM

I am confused. your chart appears to be the same data points as the one on the nsidc.org site, but the data seems to be different?

Too late, Billy. Your secret shame is published before the world. :)

Showing charts like this is a great way to get an environmentalist stammering like an idiot for a while, but they'll be back to repeating their same dogmas back to you like nothing ever happened in a half hour anyway.

"Well we meant well, and well um, gee" I think that's what Paul Ehrlich said after some of his predictions here: http://en.wikipedia.org/wiki/Paul_R._Ehrlich#Predictions_and_Quotes

I'm still waiting for a refutation of the sunspot theory of global warming.

I for one wish "they" would do more to support global warming. Damn it is cold. I think i am going to go out and let my car idle all day, maybe the CO2 produced will warm things up a bit.

Remember the movie "Lords of War" which opened with the life and death of a 7.62mm rifle round?

I'd love to track a carbon atom in the possession of Al Gore. Di Caprio, and these other leftist hypocrites.

Producing one Prius creates more loose carbon than the amount saved by driving a Prius relative to a Hummer. But liberals don't let little things like facts get in the way of upholding the image of worshipping at the altar of mother earth.

Michael Savage asked a good question yesterday: "Why does Al Gore always disappear when it's cold?"

The ice in my scotch keeps melting, watering down the exquisite 20 year old single-malt flavor.

Hi Capt, long time listener, first time caller. I wanted to point a friend at your blog post, but decided to double check the charts against the source and I found the originals for the North and South Poles together. I thought it would be informative to link both. Ones getting bigger and ones getting smaller.

Seattle is suffering from the scourge of global warming right now and Bush is doing nothing about it!

The links and discussion are fascinating, but I think people are missing the Captain's main point.

Environmentalists and the liberal media are cherry picking weather information to create manmade global warming into a foregone conclusion at least and hysteria at most.

Even if GW is real, it is a long run effect not to be observed in seasonal variations within a year but over many years, perhaps over millenia or geologic time. By manipulating the timescale of analysis, you can paint a picture of any trend you want.

Cappie and Kate show you data which does not support the GW hypothesis which has been unreported in the MSM. Kate's blog even suggests that there has been deliberate tampering of scientific data to remove the exculpatory information.