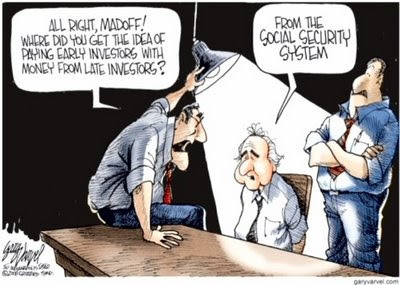 This 30% fake return attracts other investors and more money from the original investors, which permits the con artist to pay another 30% the next year.

The goal of the con is to inevitably get such a large sum of money from the latest round of investors and flee the country.

This is where social security is different and, though for all practical purposes is a Ponzi scheme, there is no "making off" with a large sum of money. It will basically just be the Baby boomers dying and unknowingly cheating people through death.

Captain,
Thanks for the HT, and the traffic.

Steve,
If you don't think it's a Ponzi scheme, do a bit o' Googling to find out how much money is in the Social Security fund.

You'll see that it is 100% reliant on future investors. And there ain't enough of them.

A Ponzi scheme like SS can survive indefinitely as long as (a) all workers are required to contribute and (b) they raise enough children to ensure an adequate number of workers in the next generation.

With the Captain's attitude toward children and his dating experiences, (b) might be a problem.

A Ponzi scheme like SS can survive indefinitely as long as (a) all workers are required to contribute and (b) they raise enough children to ensure an adequate number of workers in the next generation.

With the Captain's attitude toward children and his dating experiences, (b) might be a problem.

Well, there is a problem and the problem started happening when births started declining after the baby boom.

Having kids now is too little. too late. This is one reason having legal immigrants who work in the US is a good thing (emphasis on legal and work).

The future Social Security collapse could have been prevented by a) doing what pensions do - you advance fund them and let the magic of compound interest and time do the work and b) keeping the government from stealing from the funds to pay for other stuff.

And when the Social Security vampires come home to roost and those working can't pay in enough to fund the receiving out of retirees, there may be a revolution.

The punchline uttered by Madoff should have been, "from FDR."

I see, hey Dave- can you elaborate on you statement " Likewise we get fewer babies today because we've kept the costs private while socializing the benefits."?

It's stupid to blame the Captain's lack of children for Social Security's insolvency. Unless you're planning on having a Baby Boom every generation, it's not going to work.

Ponzi schemes ultimately fall apart because you eventually run out of suckers. The early players make off with the money, the later players get screwed.

Now imagine that the participants in a Ponzi scheme are part of a democratic system, and the early players outnumber the layer players. The scheme ends when the majority wants it to. Now not only are the later players getting screwed, but they can't get out of it even if they know how stupid the whole thing is. Now your only option is to wait for enough of the early players to die so that you can outvote them.

What a great system.

The Baby Boom and the subsequent drop in birth rates are not the only sources of problems with SS. And those problems were entirely predictable when SS was first enacted, but they were ignored.

People are living longer. Benefits have been increased multiple times over the years. Disability and survivor benefits were added.

Theoretically, a person could have one spouse and four former spouses all collecting SS benefits on one person's contributions.

SS could not pass Constitutional muster, so FDR side-stepped the Constitution. He used the taxation powers of the government to institute FICA (the SS tax). Then he used the expenditure powers to establish the benefit function. The consequence of this is that there is no legal obligation to make good on social security contributions. They are nothing more than taxes.

A person my age and my income will likely lose $200,000 in benefits from SS. This is because the benefit function of SS redistributes wealth to people of lower incomes. Most people would be much better off investing their own money in an IRA or 401(k).

Furthermore, these contributions would be owned by YOU. If you are unmarried and you die before collecting benefits, 100% of your lifetime contributions will be given to other people. You have no right to a bequest.

Social Security won't be insolvent in 2040, 2060, or 2080. It's insolvent now. Federal regulators would close a bank now if its future liabilities were expected to outpace its asset growth in such a rapid fashion.

Dave points out correctly that a Ponzi scheme can survive indefinitely if birthrates are maintained--that's exactly what the original actuaries Roosevelt used assumed.

The problem; when you tell people that government is going to pay for retirement, what happens to the traditional way of taking care of yourself--having kids and having friends?

If you answered "birthrates will go down," go to the head of the class. That's the fundamental problem with SS; not that it's a Ponzi scheme, but that it's effect is to destroy the very actuarial assumptions upon which it's based.