Federal Government Deficit as a Percent of GDP

Given they're bantering about a potential $1.2 trillion DEFICIT (not debt people) in 2009, I wanted to put that into perspective to show you just how effed we are and just how serious this financial crisis is.

As a percent of GDP, the federal deficit (assuming projections are true) would be about 9%. This is the highest peace time deficit in recorded history. The reason that is an important distinction to make is that when your country is threatened then it is probably a good reason for the government to go into deficit spending (as it did in WWI and WWII). However, even without a war (please don't tell me how much we're spending on the war on terror, it pales in comparison to WWI and WWII) we as a people have so mismanaged this country that we're now facing the worst peace time deficit. This should bring shame to the nation in that it isn't an outside force causing us to spend such an inordinate amount, but rather our revoltingly poor financial habits and insistence of being entitled little spoiled brats; 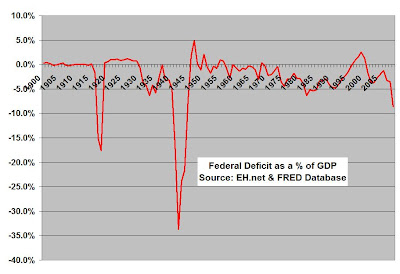 Furthermore, it gets worse for reasons thrice;

1. This is just a projection. The federal government has this nasty habit of spending more than projected, so we're more likely looking at 10-11% GDP of a deficit in 2009. Not to mention GDP will be shrinking instead of growing so your denominator will make this worse.

2. This is just the beginning. Given Obama's desire to make FDR look stingy and bribe the masses into voting for him...err...I mean..."finance hope and change" I will make the crazy prediction of the federal budget deficit actually reaching 15-17% GDP under his first (and only) term.

3. If you don't think the deficit is due to a behavioral change in people's spending habits and a testament to our sloth and laziness, just look at the trend starting in 1950 to today. As the Walt Kowolski's of the world die off and are replaced by the Jim Morrisons, Kurt Cobains and Paris Hiltons of the world, it seems nobody cares to work for what they want anymore, preferring instead to borrow the money and saddle future generations with their debts.

I'll say it again, time to get off this ship. One of my next posts will be on how any entrepreneurial country could make off like a bandit if they opened their borders to capitalist, conservatives and other right leaning political refugees from the US who tend to still insist on producing wealth.

What would Obama do without us?!
Posted by Captain Capitalism at 1:56 PM

One of my next posts will be on how any entrepreneurial country could make off like a bandit if they opened their borders to capitalist, conservatives and other right leaning political refugees from the US who tend to still insist on producing wealth.

That's an interesting point. However, history shows us that it takes very long until sensible people start leaving their country. Take Argentina or Uruguay as an example, or Germany. Only when it gets so bad that they can watch their neighbouring countries surpassing their level of wealth... With Canada and Mexico in mind, I think chances are bad that the Americans will realize it in the next 20 years.

Capt'n, your last paragraph sounds like the storyline of a book I want you to read: Atlas Shrugged. Have you read it, yet?

No I haven't. But (not to sound arrogant) I don't think I ever will in that I've already come to the same conclusions Ayn Rand did in many of her books without reading it. It shows (or at least in my mind) proves that this is not poppy cock or wishful thinking, but there is a logic to it, that natural economic laws are being followed when two people who never met or conversed come up with the same conclusions and observations.

Goldwater, we're talking DEFICIT, not debt. Our debt, I think, is about to pass the 55% GDP mark.

Don't worry, though, we'll beat out those stupid Greeks!

That doesn't make sense either... Greeks are great people.

Don't worry, though, we'll beat out those stupid Greeks!

The ironic part of this story is that decreasing short and long term interest rates make it even easier for the US government to serve its debt, thereby giving them incentives to increase their debt. I wonder what amount of debt is manageable. With Japan in mind (almost 200% now), it might be unbelievably high. (Which, of course, doesn't mean that it has no negative consequences for the economy)