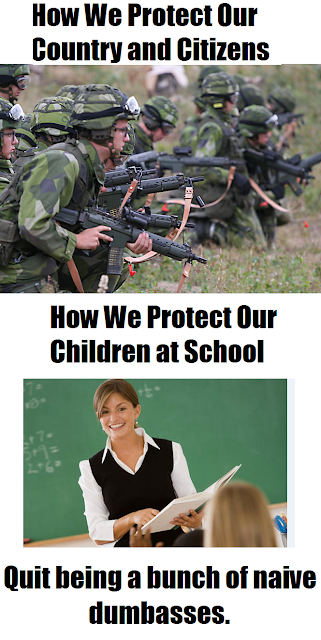 Posted by Captain Capitalism at 4:31 PM

The Great and Powerful Oz said...

I know a music teacher who carries a 9mm. She's very hot.

We have Armed Air Marshals on our planes that conceal carry. Perhaps we should just make airplanes a gun free zone, if it's good enough for our children, should be good enough for air transport.

I still think that a CCW permit should be a person requirement for every teacher in the US. Indeed, if firearms were more accessible in the UK I'd advocate the same policy here too.

When I think that we studied collisions in physics and the teacher had an air rifle that was used to fire a pellet to give us a before and after velocity for the calculations, and now...?

What so many of the gun control lobbyists, almost all politicians, do not seem to realise is that the only people affected by gun control are the honest, law - abiding people. The crims don't bother to obey the Law. That's what makes them crims. But try getting that into the brain of a legislator.

I wonder why a CCW Permit is not a requirement for a post as a teacher. I would have something similar in the UK if it were possible to legally own a handgun.

It is almost impossible to get a politician or a gun control lobbyist to understand that banning weapons means that only the crims are left with any weapons. The law-abiding can no longer defvend themselves if approached by an armed assailant.

I agree with the sentiment, but I'm pretty sure that those soldiers are how some other country protects their citizens. Those aren't US military uniforms or equipment that I recognize.