Let me provide you a little bit of insight.

When I had my radio show at AM 1500 for all of 20 seconds, I was allowed to see and work within the "inner beast."  I saw all the radio show personalities.  I saw all the behind the scenes action.  And I saw how it all worked.

But one thing my eagle economic eye caught is just how normal, if not shoddy people were in radio.  Not because "they have a face for radio," but because (after some investigating) how little these people actually made.  They were not rich, they were not even well off.  And if you were under 30 you were working for peanuts to have the "honor" to work in "show biz."

Of course, now in hindsight we know these people pay a premium in salary to work in an industry that is considered fun, but that still doesn't debunk the "star" or "celebrity" effect they have.  Most people think that if you get a radio show gig or a part in a movie you are "set for life."  You get a record contract you are "golden."  And that if you have your own show you are showered with millions of dollars.

But it's all BS.  These people make peanuts.

So it is with a keen interest I noticed this little nugget from the Guardian.  Written by one "Kate Iselin" about her feminist problems of trying to find a real man that would...well...be the opposite of what her and all the feminists were clamoring for.

Now laugh as we might, scoff and send her a katyusha rocket barrage of "I Told You So's" the real story, if you're paying attention, is NOT that a feminist is having to sleep in the bed she made, but that Kate Iselin has...the same amount of followers on Twitter I do 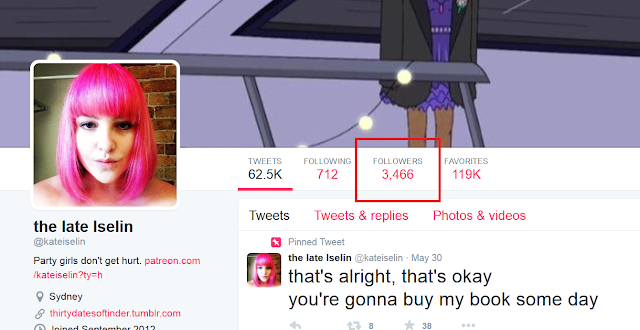 This is telling because, well, frankly, I am TECHNICALLY and in ALL REALITY a nobody.  I'm just some guy who started a blog a decade ago, ranted and tiraded against all I saw, wrote a couple books and host a podcast like everybody and their brother.  So why is it a nobody like me, who had no intention of getting into "journalism" is on par with a "professional" with the establishment and multibillion dollar support of an established media giant?

It's because we're winning.

Not that there was a war to begin with, and not because of any particular doing of our own, but simply because of the democratizing effects of the internet an industry that was once the preserve of connected lazy baby boomers who feared math, is now the backyard hobby of millions of rookies.  And these rookies are proving better than the "pros" who were unfortunate enough to join this industry as the internet has rendered it obsolete.

Of course, if you were brought up in the past 40 years (which most of us were) you are still under the spell of "oooo Celebrityship, Stardom, and Rockstar!"  You see somebody on TV or hear somebody on the radio you think they are "famous" or "rockstars."  And while the media may have been able to throw up this veil of "celebrityship" it's becoming increasingly apparent just how fragile and "veilish" their fame was.  So much so The Guardian, a presumed premier battleship of left-wing media is now on par with a guy who started a blog 10 years ago and threw up charts.

In other words, the internet has completely removed the veil these "rock star journalists," these "Time Magazine" authors have and exposed them for nothing more than washed up , wanna be, poverty suffering journalism majors and political activists they are.  The real journalists are the millions of minds who actually do think independently and take to the internet to voice their opinions or at least call BS on the previous guard's claims.  And the fact a guy like me has equal ranking and footing as their "professionals" shows that the American population is slowly refocusing their eyes and recognizing the real media world for what it is.

So the next time you decide to dismiss Roosh or Aurini or Sargon or what have you, why don't you look up the Twitter following, the YouTube subscribership, and other measures of social media and compare them to the "professionals" the likes of "The Guardian" are hiring.

Some people are finally waking up!
Posted by Captain Capitalism at 8:56 PM

I remember reading on the bbc website old media starting to complain about the lack of interns willing to work for free, the sources they cited were itv and one of the Murdoch papers. "We still have a future too", was essentially the headline, certainly worth a bit of schadenfreude.

The MSM full of vapid talking heads and journalists who are paid by pageview. It's no surprise they can't get more twitter followers

I would think as an economist you would use money as a gauge of success in media. People vote with their wallets. It doesn't matter how many followers or "friends" someone has -- how much income is a broadcaster personally making? How much ad revenue is a network receiving due to these names? And if you want to use Twitter/Facebook metrics, how many followers do these people have?

You can run down the list of top YouTube earners as well and see how many followers they have.

I think you're comparing yourself to too easy a target. Aim higher.

Speaking of alternative media, here is your typical gentrifying, mommy and daddy subsidising, funempployed hipsters with too much time on their hands.

The Man Booker Awards are probably the most prestigious award in literary fiction. Having a novel on the long list, much less the short list or winning, can jumpstart an author's reputation. Editors watch who wins, and look for new authors in the same vein.

In 2011, there was a controversy, with critics claiming that judges were voting for "readability" and popularity rather than greatness. As proof, they pointed out that the 6 novels on the shortlist had sold 37,500 copies. Not each, collectively. That was double the number of copies sold the previous year.

This is the heart of the Sad Puppy controversy in Science Fiction and Fantasy writing: award the Hugo to things people actually want to read, not that a handful of gatekeepers decide is "literary".

I've only known one guy in radio...a drug addict, sex pervert, and a liar and thief and coward. Sheesh!

People are waking up to the tripe, half truths and flat out lies the corporate owned media puts forth. More people want to see the truth of what is going on, things of importance. That said, it doesn't mean the Kartrashians will lose their brain dead following. Way too many sheeple for that to happen.

Your'e talking about me, right? XD

The problem with the long-established formats is that they've always relied on imagery, promotional hype, and gimmickry to make a psychological impression on their listeners/readers/viewers.
To appear either slick, authoritative, or glamorous in some way.

I've been reading your blog and I bought one of your books because when you were on I thought the Economic Supperclub was the best am talk show on the radio.