I can't remember the reason my curiosity was piqued, but whatever it was it resulted in me asking the question:

"What percentage of pregnancies end up being aborted?"

So off your intrepid economist captain went to teh interwebz in search of the data he needed.  And though it took some adjustments and other methodological maneuverings (missing years of data, what about miscarriages, etc.) he was able to suss out the details.

20% of pregnancies end in abortion.

Now before you get all appalled, realize this is an IMPROVEMENT over the women of the baby boomer generation where they seemed to make abortion an Olympic sport.  Back in those "glorious" 70's and early 80's it was 30%. 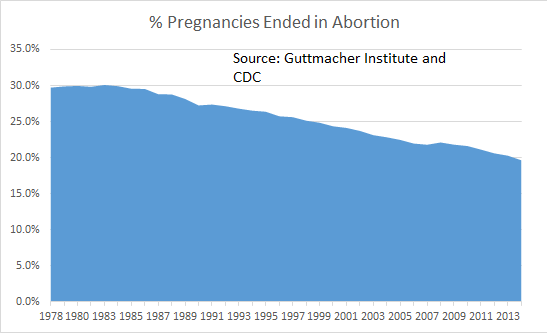 But it's still a pretty atrocious figure that 1 in 5 pregnancies today end up in abortion.

Now keep in mind I am pro-choice.  I truly believe a child not wanted or a child unable to be cared for will live a life worse than the 100% neutral life of never being born in the first place.  And in all intellectual honesty I can be flippant about it.

I'm not religious.
I don't have kids.
I got a vasectomy (class of '07).
And I'm very thankful the law has made it SOLELY the responsibility of women to make this horrible decision.

So yes, for reasons of cowardice and misanthropic indifference, I really don't care if you abort your baby and will fight for your right to do so.

However, so high was this number not only did I forgot my original reason for calculating it, but it replace it with a separate observation.

How irresponsible and amoral are American women?

Now I know there are already some mathematical problems that could potentially overstate or distort these numbers.

And thus it does not translate directly to "1 in 5 women get abortions."  But even accounting for these variables, it's still pretty darn close to 20%.  Which behooved my question.

How irresponsible and amoral do you have to be that 20% of you use ABORTION as a means of birth control?

You see, the problem I have with this number is not that there's this many abortions going on.  It's that it tells me 1 in 5 women are not responsible enough to use the 438 other forms of birth control before screwing around with not only the lives of future innocent children, but their own.  That before they partake in the act of potentially bringing in a new and innocent human life into this world, 1 in 5 of them just say "meh" and to hell with the birth control.

But where the morality of this comes in is one that even though I'm pro-choice, I just don't understand.

WHY RISK THE MORAL DECISION TO EVEN HAVE AN ABORTION???

Look, I'm the first guy to admit I don't know if there's an afterlife or if there's a god or whether a fetus is a living human being and whether abortion is murder.  But even with my callous indifference to humans, I would NEVER put myself into the position of having to make that decision.  It is such a daunting moral (not to mention psychological, biological, physical, and emotional) decision that when I originally set out to do this calculation I thought for SURE it would come under 5%.

Alas, 20% of women disagree with me and don't give a flying flip about the moral gravity and ramifications of having an abortion.

Now the good news is that this is (thankfully) not the majority of women.  80% of women actually have the responsibility, wisdom, and selflessness to make the right choice, use birth control, and bring a child into this world when she's ready for it.  And also (if the data is correct) this trend is trending down.  But I wanted to point out this statistic not just because it's appallingly high, but to warn the young boys out there.  1 in 5 women are just not responsible and at minimum have a questionable moral compass.  And while you may say, "well that means 80% of the women are just fine," true....but have you ever dated more than 4 girls?

I don't think you've made your case particularly well on this.

Women are fertile for say 20 years. So it seems that over a 20 year period 1 in 5 women has some sort of failure of birth control. If we say that a woman has 13 fertile cycles per year, then birth control failed in 1 out of 1300 fertility cycles.

Hey Cap. I don't have sources, but I have read in various places that a very high percentage of abortions are for women who have already had at least one in the past. So, you are correct in saying that women are using abortion as a means of birth control, but it is not 1 in 5 women. The stat said well over half of abortions were the second, third, or more, so the number would have to be less than 1 in 10, but your point still stands.

Also, I have also read from a woman who worked at a Planned Parenthood clinic that more than half of the women getting abortions were using some sort of birth control that either failed or was used incorrectly (anecdotal, not statistical, I know). Birth control, like "too big to fail" creates moral hazard. This explains why in ever single jurisdiction where sex ed has been introduced or where birth control became more available, teen pregnancy AND abortions have both increased.

These are both interesting and important points for discussing policy and law, of course, and have nothing to do with the morality or immorality of abortion.

No. Your math is wrong. If 20% of pregnancies result in abortion.

Depending on the number of pregnancies women have gives you a different percentage of women.

If the average number of live births over a woman's life time is 2.2, then a 20% rate would indicate that over half of all women have an abortion at some point. With that number of births, every two women on average having a little over 4 live births during their life time, that's you're 80% of live births right there.

For every two women there is one abortion.

It's likely impossible to get any good numbers - but ya have to wonder how this 20% abortion figure relates to how many women are on anti-depressants..

It is also erroneous to assume there is a correlation between abortion percentages and responsibility, maturity and suitability of women in general. I stick with the divorce stats which indicate to me that at least 40% of women out there - and probably closer to 50%...are unsuitable even for a quick pump-n-dump.

I wouldn't stay frosty but I would be extremely vigilant. There is no such thing as free love, boys - there is ALWAYS a price tag involved.

The recent undercover videos of Planned Parenthood was the final word on this debate. We all know what abortion is and what it does. Abortionists themselves admitted on camera they're killing human beings. Hard to argue they're not human when you're harvesting their human organs to sell.

The real argument by the pro-choice crowd follows the true objective of feminism, which is to remove all restraints on female sexuality. To them, women should be able to have an abortion at any time under any circumstances, all paid for by someone else. That "someone else" is us.

It's bad enough that it goes on at all. It's bad enough the Supreme Court went full retard in saying the Constitution gives women a right to kill their unborn. But now we who are against it are forced to pay for it through taxation, and our insurance premiums subsidize it so that women can have it covered in their health insurance plans.

That is how bad the situation is, Cappy. It's considered anti-women and misogynist to think that other people shouldn't be coerced into paying for a woman's abortion, or her birth control. This isn't even addressing the morality or legality of abortion, just the fact that others are taxed to pay for other people's life choices. The message is: Shut up and pay, you male pig.

But consider this side of it: For a woman to abort their child is to go against her most basic maternal instincts that have been literally programmed into her biology. So what kind of a mother do you think she is going to be to the kids she doesn't abort, if she believes she had the right to "abort" them at one point? Will she know the difference between abuse and parenting, or will it be as blurred as their definition of when the unborn are human and have a right to life?

What the numbers tell us about American women is what Menu at University of Man observed a while back: many of them are utterly unfit to be mothers.

Funny timing.I had a talk with two nurses who perform abortions just 2 weeks ago and they told me a significant portion of the women (very low IQ speciwomen mostly) actually use it as a method of birth control, which means they have had 3 or more abortions. Distorts the figures pretty much.
This being said, the rational-moral part of the post is one of the most sensible things I have read on the subject.

what is the stage of these abortions? very early stage obv. not as bad as later stages

What are the racial demographics?

I would propose this theory though. considering that the morality of America has taken a header off of the high dive since the 1960s, I propose the argument that that the abortion rate only dropped because the ease of use, lower prices and increasing availability of birth control.
given the loose morals of people today and increasing irresponsibility, with the 1970 availability of birth control applied today might even have a higher abortion rate.
I know its impossible to measure this; but imo there are less abortions today because of that and not people being more responsible.

I don't agree with your assessment that outcomes for the unwanted is less than nonexistence. Clearly if the unwanted who were not aborted preferred nonexistence, their suicide rate would approach 100%, and I don't know what it is, but I'm sure it is much less than that.

Where do you draw the line on personhood?

Funny timing.I had a talk with two nurses who perform abortions just 2 weeks ago and they told me a significant portion of the women (very low IQ speciwomen mostly) actually use it as a method of birth control, which means they have had 3 or more abortions. Distorts the figures pretty much.

That's pretty much what I heard. In pilot programs where the govt. pays low income women to get low maintenance forms of birth control (the shot, IUDs, etc) the abortion rates plummet. A junkie, druggie, low-effort woman isn't going to bother with using high-maintenance birth control (or risk having her thug criminal boyfriend kick her out of bed if she tells him to use a condom)when she can just saunter off to the nearest Planned Parenthood and get her fetus sucked out for free. I'll be surprised if some of those places don't have a "frequent customer punch card" (For every 3 abortions you have, you get a free tubal ligation! Actually that might be a good idea.)

Having explored the topic from a detached pro-life angle at Ushanka, I share your "disgust" with the process of researching this topic, and I too am not afraid to question the reasoning of women who have other options.

Some recent research of mine - A Comparison: