With no interest in the presidential election nor Super Bowl, and a growing disinterest in trying to drag the rest of society along into some kind of enlightenment that may not make the future so sucky as it is guaranteed to be, I found myself bored and decided to investigate why Saudi Arabia's credit rating had been cut.  Yes, I knew it had something to do with collapsing oil prices, but I wanted to see how severe the ramifications was for Saudi finances.

And mercy, is it!

First we have economic growth.  This is NOT GDP, though the graph will look that way.  It is YEAR OVER YEAR economic growth, ie- GDP growth.  In 2011 and 2012 Saudi Arabia's economy was booming, logging a near one third growth rate for both years.  Not 1/3%.  33%.  Growth collapsed quickly in 2013 and 2014, entering a NEGATIVE 13% GDP for 2015.  Of course, Western nations aren't accustomed to such volatility in their growth rates, but it still doesn't change the fact 2015 was a devastating year for Saudi Arabia. 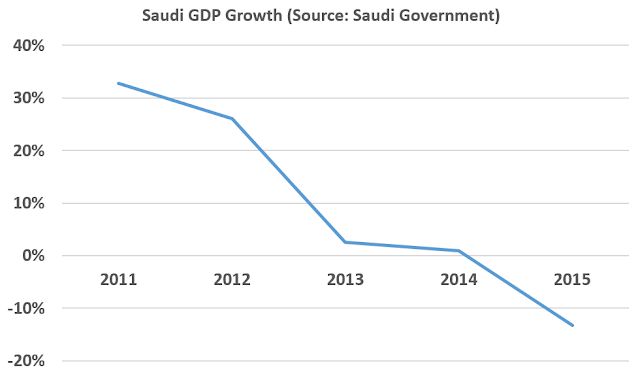 Since the Saudi government is so dependent upon oil prices, it behooves the question what happened to government revenues and finances.  It's hilarious. 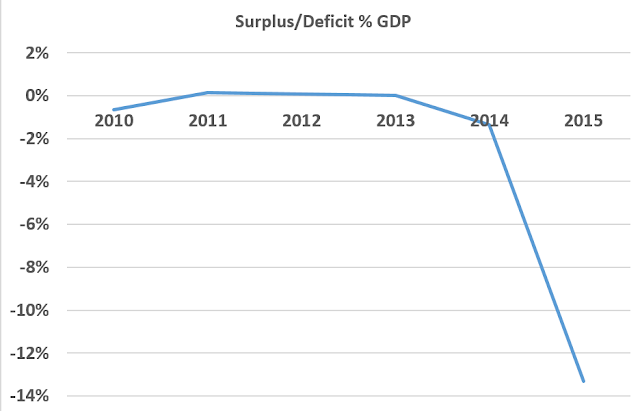 In one year the Saudi deficit crashed to more than 13% GDP, worse than even Barack Obama's worst year.

There really is no economic lesson here aside from the importance of diversifying your economy.  But it does make me feel good to see a financial source terrorism either directly or indirectly relies upon drying up.

You may continue about your Monday with these additional warm fuzzies.
Posted by Captain Capitalism at 9:30 AM

The House of Saud have some significant issues. First off, there are so many of them running around, each of them entitled Prince. Second, being the custodian of the holy Islamic sites, while granting them prestige comes with the issue of having to be more religious than their enemies. Third, vast majority of their actual citizens wants to either work for the government or the bank/investment. Note, I say their citizen, as the majority of their oilfield are tended by foreign guest workers that's treated significantly differently.

They placate their citizen with bribe, much like Venezuela did, but this can only go on for so long. Their current attempt at crashing American Frackers is costing them a lot of money. It's a race to either completely kill off the Frackers or they die, so they're taking this the long view.

Couldn't have happened to nicer people. And they are usurpers, too!

I find it interesting that you advise Saudi Arabia, and other single sector net exporters, to diversify their economies.

What's the point of international commerce if countries cannot specialize in what they do best ?

It's like advising against the division of labor, to tell people to become jack of all trades and to grow their own food instead of specialising and doing commerce.

Wasn't globalisation supposed to allow countries to specialise in what they do best and then trade with each other ?

To advise for diversification is an admission that international commerce is not working.

And I agree that it is not working for resource rich countries.

Countries like Venezuela are being scammed by international commerce. Venezuela would be better off burning it's own oil and self-producing everything it needs.

Diversification is another word for buy local and hire local.

Personally, I don't understand why energy rich countries like Venezuela has fallen to the scam of international commerce.

here it only shows 3-7%
http://www.tradingeconomics.com/saudi-arabia/gdp-growth

The Saudis can stop this at any time. Once they've starved out the frackers, they will allow the price to rise. We should be glad they're doing it. They're hurting Iran and Russia more than they're hurting the US. What the Saudis can't escape is that once the price rises again, the frackers will come back, and it's not just the US that has large frack-able deposits.

The point of diversification of the economy is that in moments when the prime industry (like the oil in the case of the Saudis) crashes, there will be a series of secondaries to back up the economy and not let the whole thing collapse. If the Saudis lose revenue from oil, they are pretty much screwed. Which by the way has repercussions on the whole world since the Saudis own a lot of stock on Wall street and if they don't have the money to invest, it might be affecting you directly. So, if the Saudis were building infrastructure, invest in new industries and research, instead of building palaces and buying expensive cars they might have had a more stable economy durable to shocks like the oil onep

The Saudis made a deliberate play to try to push out newcomers in the enrgy market and maintain their market share. That would be Ruskies, Yanks and Canucks. They had two years to do it in; it was projected at the time (I forget by who) that they would start running into deficit in 15 months, which they did last September I believe.

But now the Iranian oil genie is out of the bottle and the Saud's are so screwed, as are our Alberta lads.

I don't understand the Saudi's short term logic. Suppose it was gold mines they had instead of oil. Would it make sense to massively mine and refine gold only to dump it on the international market ?

When you have a resource, your resource IS your wealth. You can save it by not pumping it, not dumping it and keep it underground.

If I was dictator of Saudi Arabia, my strategy would be long term. I would let my competitors pump their oil at a high cost of production and when they start depleting their oil reserves I would ramp up my low cost production and benefit from the high oil prices.

I would think in a Strategic Petroleum Reserve way.

And also, as Aaron Clarey points out, the Saudis are extreme spenders. I would not credit then with some kind of conspiracy to kill the shale oil.

I would advise the Saudis to SAVE money and SAVE oil. They are spending TOO MUCH. They made spending plans when oil was high and expected oil to remain high so they spent spent spent. Now that they are cut having to service their debts and spending habits, they have to sell a lot of oil to meet their liabilities and the international market is not cooperating.

It looks like Saudi Arabia is also going to have to taste Austerity. What Irony !

If I owned a lot of resource that I could extract cheaply, I would let my expensive competitors sell theirs first and I would sell mine last. The spreads between cheap pumping and high selling would generate huge profits.

But the princes have to spend NOW and cannot think about long term profitability and the future of their country and their people.

Maybe they accidentally decapitated their finance minister and now we are in this accounting mess.

Of course if they can no longer bribe their citizens and there is unrest, then you may see the Islamists gaining power. Then they will have a whole new source of income...

The Saudis are planning on diversifying their economy by building major railroads into the interior to exploit the huge non-oil mineral deposits which will create a major mining industry. They might become another Western Australia.
They are also making some attempts to reduce dependence on oil by building urban rail systems.
The Saudis also have major assets that they can sell.
Therefore, the Saudis are likely to keep going for some time yet, though the best years are probably behind them.