I figure since you're on this planet once, that you might as well pack it in and live how you want.

That's why I have no reservations about going treasure hunting.

Now, finding Coronado's lost gold is probably going to rank up there in likelihood of me finding on an old British Mar o' War with the queen's gold, so I hunt after other artifacts like fossils, ancient ruins, archeological pieces, etc.

Mock me if you must, but it's my life and that's how I choose to spend some of my free time.

But there was one unique "treasure" that I had in mind that I was going to pursue and find. A lost treasure of probably no monetary value, but sentimental value to any Gen-X'er so that when I retire in my palacial estate and in 2056 guests are perusing through my "treasure" collection, they'll look up and say "what's that" I will turn to them and say,

So with "global warming" making the temperatures here in Minneapolis a balmy -16 freaking degrees, a traipsing around a hot dry desert looking for the lost pieces of Atari Americana sounded inviting.

Well, 20 minutes on the internet and my hopes are crushed; 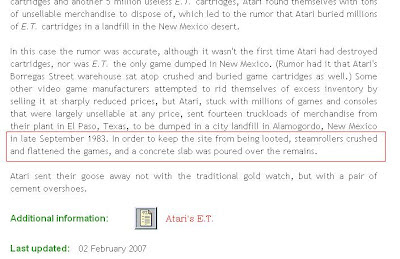 For yes, the legends are true, but they CRUSHED ALL THE CARTRIDGES AND LAID CEMENT OVER THEM!!!

I lament the loss because I could see in the future that becoming a historical marker, sort of a piece of American history, let alone it would be eccentric to actually dig up and own one of those fated cartridges.

Regardless, you know this wouldn't have happened to The Goonies.
Posted by Captain Capitalism at 10:23 AM

""Once again, Dr. Jones, we see there is nothing you can possess which I cannot take away..."

Or, to flip the positions, if you really want to know where to get one, Dr. Jones, you could ask the Hovitos...if only you spoke Hovitos.

Yeah, the E.T. game was horrible, so they buried them near Alamagordo. You know what else is near Alamagordo? Trinitiy Bomb Site, where the US government tested the first nuclear weapon.

What's the connection? Well, not much, but I believe that the E.T. game and the development of weapons capable of wiping out all life on earth are events that, if not quite exactly the same, are at least occupying points on the same sort of linear scale.

Here's a treasure hunt for ya - see if you can find Chase the chuckwagon at a garage sale. Then you'll have an Atari cart that's worth a lot.

My condolences. I am still kicking myself for chucking all of my old Atari stuff when the Intellivision came out. Come to think of it, the Nintendo forced me to chuck that too.