My Ex-Girlfriend is Sub Prime

I was dating this model-esque Norwegian goddess a while back. Your classical blond haired blue eyed beauty.

But as is the case with most drop dead gorgeous women, they're always looking for a better catch, and yours truly, sexy, intelligent and video-game playing as he may be, could not compete with the likes of professional football players or professional models she seemed to have a hankering for.

That and she ended up cheating on me with her ex-boyfriend which promptly earned her the title "ex" girlfriend.

Now I like to think that there is poetic justice in the world, that karma comes back and bitch-slaps the people that so righteously deserve whatever come-uppance may be in store for them. And in the case of my ex's this usually takes the form of them getting fat, getting divorced or in several cases them going out with a starving-artist/drug-dealer/criminal/loser that just parasites off of them. Suddenly the stuffy, fiscally responsible economist doesn't look so bad (and sadly this story seems to be universal across all men I know of my generation).

But this one was special.

For I am down with The Force. And The Force is down with me. And that force is again the most powerful force in the world;

And it just so seemed that karma had decided to use The Force as the vehicle by which to deliver poetic justice to my ex.

For you see, previous to all the dance and romance the ex was married to a young preppy wanna be. They got married at the early stages of the housing bull market and enticed by the false concept of getting rich quick both of them went into business as mortgage brokers. Even idiots can make money in a bull market and the two of them did swimmingly.

And what do young 20 something American boys and girls with no fiscal austerity do when they make $100,000?

So they bought a picturesque house in the suburbs of the Twin Cities. They had the interior all done up to perfectly suburbanite perfection. The furniture was brand new and color coded. And things were great.

But you know what would be better?

Well how does one afford a Corvette when you spent all your money in the past year on a house and furnishing? Naturally, they being mortgage brokers, the answer was "a home equity loan!"

We'll strip all the equity from the house to the bare bones!

And so they did becoming one of the many people to have not only a HEL but an ARM as well. 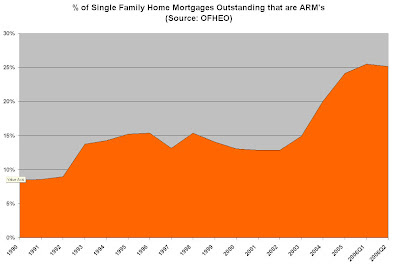 Now what was missing from this perfectly picturesque suburbanite story is an affair! And desperate to live true to the American way of life, the young woman decided to start having an affair whilst her husband thought he was living the life with a beautiful wife and a Vette.

Soon enough the picturesque-ness wore off quickly as the husband found out she was having an affair. And his timing could not be better, for it was at the peak of the housing bubble.

Divorce and chaos ensues. The house is put up for sale. And several months later I run into the girl who was going to become my ex.

I get what was at the time only half the story. But as I slowly find out over the course of several months what kind of girl she is and then abruptly find out upon finding out she was sleeping with the same affairee, she is plagued not by the divorce, but the lengthening time by which it is taking to sell the house (that and the crushing loss of me of course!).

By this time I was out of the deal but still wanted to see if karma was ever going to avenge my lost time, money and resources wasted on this girl. And sure enough I was avenged for where I am down with The Force and The Force is down with me is that she still had her name on the mortgage.

And the housing market was in free fall.

As the housing market dried up neither her nor her ex-husband could garner the cash flow to finance their material possessions. The Corvette was repossessed. And then the house.

It put a big smile on my face to see in the papers that they had their house foreclosed on and that her life was now ruined. Additionally through the grape-vine I found out she was living in a run down section 8 ghetto apartment on the north side of St. Paul where somebody was recently stabbed.

So what's the moral of the story aspiring junior and deputy economists?

One - avoid "amazingly" attractive women because they're just not worth the time. Find the quiet cutie in the corner.

Two, more of an economic lesson of the day, don't loan to sub prime people. Because not only are they primarily idiots and morons, they're CALLED SUB PRIME FOR A REASON!!!!!

And three - do not ef with somebody who is down with The Force, and The Force down with he.
Posted by Captain Capitalism at 3:33 PM

There must be little in life more satisfying than watching the Invisible Hand flipping off your ex. :)

Referring to Economics as "The Force" makes a lot of sense, really. It saturates all life. Those who are sensitive to it can perform feats beyond the comprehension of mere mortals, most notably predicting the future and developing a borderline supernatural sense of impending fiscal danger. Jedi have lightsabers. Economists have charts. Any sort of confrontation among peers of either group will involve a lot of bright clashing lines.

Also, those who understand how to use it are automatically cooler than other people.

sounds like you have some serious bonding with the kharmic forces, cap. do you give classes?

Ok, I have an economic/sociology question for you that recently came up amongst my friends:

Are coupons too cool for guys?

Honestly, I see this as a clash between our peers saying, "oh, no, too girlie", vs the economic benefit of using coupons or diner cards. I mean, aren't companies basically giving you more buying power for your $$ while basically declaring that their products aren't really worth the listed price, but are really only worth the discount price? I mean, if you use a discount on a date, you have the dough for desserrt or a stock option, right?

so, I ask you, Capt, tell us about why discounts aren't cool enough for guys?

The ex you speak of was *amazingly orange* not amazingly beauitful. Carrot girl will have skin cancer and wrinkles before she will ever have good credit.

That's what you get for dating white trash Captain. Anyone who brags about not going to college in our generation is just plain stupid.

I bow before the power of the Force and your charts, oh great one.

But I have a question. Rather than Twin City condos a few years ago I bought shares in an Alberta real estate developer (www.melcor.ca).

Hey Jaeger, I live in Cowtown (Calgary for you Amaricuns) and I work for a real estate investment company (actually we're flippers, but "investment company" sounds better). It's a horrible time to be investing in any form of investment real estate in Alberta right now. Cap rates (roughly your ROI) are down around 6% in Calgary and 6.5% in Edmonton with a number of sellers asking for (and occaisionally getting) 4% caps. Having said that, Melcor appears to be a holder of real estate and a developer. You can still make money in development if you're smart about buying your land, planning and managing your project and then making sure you built something that is needed. It's really up to Melcor's mgmt as to whether or not they make a profit. Personally I think the market is grossly overheated. Last 2 weeks or so when oil went down to $50/bbl I heard a lot of worry from the landlords I talked to (and boy do I talk to a lot of 'em!). If oil ever goes down into the $40's then we'll see a big softening. Also, last fall only 70% of the rigs were working because the E&P companies got tired of being screwed by the drillers and service company's whose rates had gone up by 300% over the past several yrs. If only 70% of the rigs are working then employment will fall, there will be less money in the economy and average Joe can't afford that house that just DOUBLED in price over the past year.
--Redneck Ricardo

I can't recommend any investment recommendations except for my satirical "You are Guaranteed to Lose money on this one!" type deals.

Hey, good to here from you! How's the east coast?

1. You think your old brother would be foolish enough to marry such a girl? Please, give your brother more credit.

2. Unless you have started to bat for the other team, your opinion as to whether she was attractive or not is irrelevant as it is straight men and homo-sexual woman that determines what is "sexy" or "attractive" in women. And I say she was smoking hot. Dumb as rocks, sure, but smoking hot.

I suggest finding yourself a good Irish redhead. Accept no substitute.