Social pensions (social security, social pension, etc.), the vast majority of which have been mismanaged, now primarily rely on workers today to pay for workers of yesterday. This means pensions are to be paid for by the economic productivity of a nation.
But how much have governments promised their people relative to their ability to pay for those promises and deliver?
Thus the pension entitlements as a multiple of economic earnings. 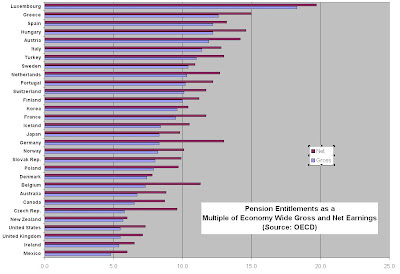 I find it odd Mexico stands a better chance of paying their pensions that Luxembourg.
Posted by Captain Capitalism at 9:56 AM

Interesting how more than a few of your graphs show the anglosphere grouped together.