Chicks Dig Me for My Charts

It's sad, but they don't look and see that I have a soul. That I too am a human being.

No, they just look and salivate over my charts.

Which they should because my charts rule. Especially two new ones I've happened upon.

Now I know this concept has existed before. The Economist had a chart about 18 months ago. The problem is IT WAS 18 MONTHS AGO AND it was indexed (suggesting to me the person who compiled the data (from HSBC) didn't have actual rents data available to him, but did have growth rates and so the best they could do was index it)

Regardless, the concept behind these metrics is identical to the concept of a P/E ratio. With stocks, how do you know if one stock is better valued than the other? Well, take the price of the stock and divide it by that stock's earnings. This gives you a P/E ratio and shows you, in essence how much you are paying in stock price to be entitled to $1 in earnings. Thus, the higher the P/E ratio, the more expensive the stock is.

The same concept can be applied to property. Property, like stock, is an asset. And like any other asset it has the ability to create a certain amount of income. So you take the price of a property and divide it by its potential income and you get a similar P/E measure except for property.

In this case, property usually generates income in the form of rent. So what I did was take the median household price in the US and divide it by the national average "Fair Market Rents (FMR)" to get this "real estate P/E" 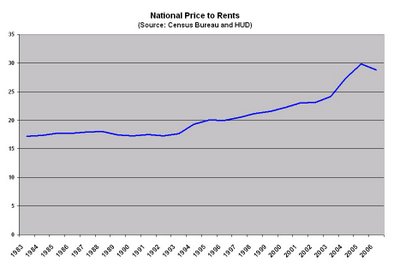 The results are not pleasant, but what we'd expect. Property prices have increased at a rate faster than rents. Suggesting property is still overvalued.

Their is, however a problem in using rents for estimating the over/undervaluation of property;

Not all property is rented out.

Matter of fact, most property is lived in therefore there are no rents.

That's OK, because we can still gauge a P/E ratio for property using "median household income."
How much does the median household cost relative to the income of the average household. 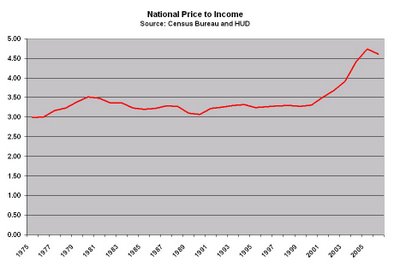 And again we see that housing prices have appreciated much faster than incomes. ie-incomes have not kept up.

Of course rents could come up by 40% which would mean housing prices wouldn't drop at all, but given the glut of condos being converted into apartments and that developers are still trying to push inventory on the market, this is unlikely to happen.

Based on house price to income property prices would have to drop by 21% to come back into line.

Doing the advanced, PhD econometric dance, high-end, hoity toity, fancy schmancy mathematics, economists take the simple average between the two and say that property has about a 30% correction ahead of it (or an laughable 30% increase in rents).

Now, those of you who have your equity built up in your house and wear your property price like a badge of honor. And those of you who borrowed all the equity out of your house so that you could to buy crap you don't need. And all the thousands of developers who have become accustomed to growing by leaps and bounds and making big time money without seeing if the market can absorb your inventory. And all you fake-richy-riches out there who just borrow borrow borrow, never work a damn day in your life, and use other people's money to maintain a lifestyle you truly never could afford in the first place are ALL going to get angry and mad and blame me for the above data.

And that I'm wrong.

And that there's "x,y and z" reasons why property will rebound.

And that we're just in a temporary lull.

And that such a severe crash in housing prices cannot happen. 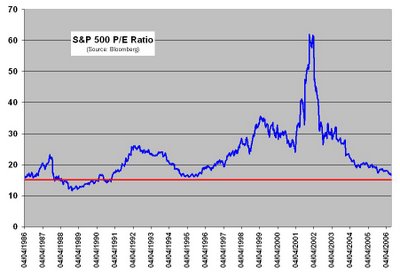 Get ready for a serious dose of reality.
Posted by Captain Capitalism at 8:39 AM

And then we get the forclosure wave.

Hmmm, i'm in the market for a house (to live in, not to rent out)... I suppose i should wait? For how long is the question really...

Frank, I'd try to get one through a foreclosure auction. You can get a killer deal on those sometimes, way below market value.

I'm planning on building a new home this fall. So, Captain, is it feasible for me to expect this market correction to also affect the cost of this home (I already own the raw land)?

Alfred T. Mahan said...
This comment has been removed by a blog administrator.
8:26 AM

It's just like the market crashes! You can make a killing after the fire sales, since the market will inevitably recover. It's just a matter of timing. Wait until the boomers all scream in panic and sell off their McMansions, and snap 'em up for a song.

If I wasn’t already swooning over these outstanding charts, it really sent me over the edge to see how they were delivered with such obvious wisdom and a self-less concern for the nation. Gee Captain, why can’t more men be like you?

Do what the UK or Toronto and Vancouver do to keep real estate prices up.... Open the gates to immigration.. Problem solved. (sarc..)