I largely view the majority of charity as a waste of money.
Of the bevy of various charitable programs since the Marshall Program, have any actually brought about a resolution to the problem they were intended to resolve? Of course not. Because charity is more about making people feel better about themselves than it is to legitimately and PRAGMATICALLY (ooooh! There's a word leftists hate) improve the lot of those less fortunate. And in a sick and twisted way, charity more often than not results in the very-well off worsening the lot of the very-poorly off solely for to make the very-well off feel good about themselves. It's sick.
I just pray the Gates Foundation with it's "means-testing" approaching might actually do some good in the world and fundamentally change how charity works.
Regardless, I found this chart to be interesting. People call it charity. Until I see charity actually improve the lot of the intended recipients, I'll call it naivete. 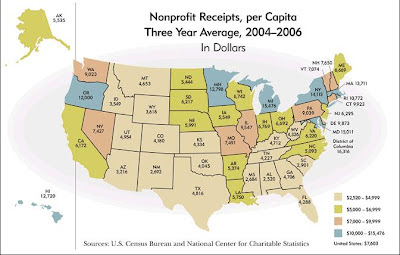 Posted by Captain Capitalism at 9:23 PM

I'm going to guess that the last slice is the smallest of all, and that most donations go into projects and causes that are never expected to finish, and are mainly to support operating expenses or capital improvements (such as with churches, museums and universities.) Research institutions generally have a wide variety of projects, and will always be able to find other things to do.

I'm not totally disagreeing with your estimate that these nonprofits don't necessarily help anybody other than the givers, I'm just saying that most charities aren't there to fix a particular time-limited problem.

I have to amend my previous post after reading this: http://www.nytimes.com/2007/03/01/business/01scene.html?ref=business

Maybe if I had more money than I could ever spend, I would give some to charity, but STILL NOT TO ANY THAT SPEND HALF THEIR DONATIONS ON SEEKING MORE OR GOING UP AND DOWN MY STREET COLLECTING MONEY FOR LUPUS!!!

This does point out a problem with many modern charities; the problems they've been created to ostensibly solve have, by and large, been solved by now.

For Exhibit A, I give you the March Of Dimes, established to defeat polio. Who the heck gets polio any longer? But the March of Dimes, rather than slapping itself on the back and hoisting a few congratulatory martinis, has now expanded into this huge, bloated bureaucracy targeting all sorts of probblems that have nothing to do with polio.

The money donated to these gigantic charities, usually goes to pay overhead, rather than towards research. For myself, when I donate to charity (and I do donate) I prefer to give to charities that I see immediate effects, and do not have gigantic nationwide bureacracies sucking the money away from my gift.

I went to the U of M, after all, so I've seen that in action up close and personal.

Charity begins at home. I am certain a quick inventory of extended family need will provide ample recipients for one's charitable donations.

There are alway nephews, nieces struggling to get post secondary education or resettle into a now marriage, job or childbirth.

An old uncle or aunt who is eking by on too little income.

Then there is your own well-being a future retirement lest you become needy or ill in the future.

The poverty professionals make a career of caring about everyone else, most of whom are doing little for themselves.

Life is not and never has been 'fair' .. the is merely the envious wish of the lazy, stupid and incompetent.

The gene pool in degenerating because we are violating Darwin's law.

We alway admire the beauty and perfection of the animal kingdom. It is that way because the weak die off or do not breed.

We are a sick species and the more we enable to weak to proliferate the weaker we become.

In Canada we have starting opening 'safe injection sites' for drug addicted criminals. In both the US and Canada we don't punish criminals and child abusers among other depots.

There is little left to admire about the human race.