Ireland is Now Richer Than the US

I knew this day would come. The day Ireland would surpass the US in income per capita. Even though Ireland has a higher overall tax rate than the US as a percent of GDP (35% vs. 29%), its low corporate taxes would inevitably carry it through (12.5% vs. 40%). 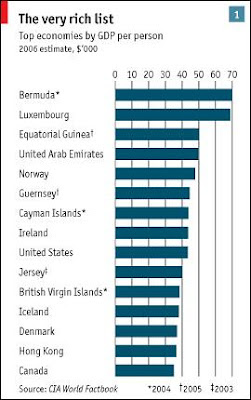 However, I did notice that Norway was higher than the US as well, which enters us into whether or not we're comparing apples to apples on this very important statistics. The data comes from the CIA's World Factbook which claims it adjusts for PPP. But I've seen differing figures before from the World Bank, the OECD, the CIA, none of them seem to reconcile.
Whichever the case, the trend is the most important thing. And no more than 5 years ago it was very clear that Ireland was below the US in terms of standards of living. Now it seems they're neck and neck at the Galway races.
Posted by Captain Capitalism at 10:36 AM

You reap what you sow!
Compare this to your article from the 22nd and see who has decided to put off paying for social programs?

Keep in mind Ireland has a massive difference b/w GNP and GDP (following are 1995, 2005 figures from finfacts.com):

I seem to remember reading in the economist that there's is one of the largest differences among Western economies.

I don't doubt that Norway is ahead of the US in per capita GDP. They're the world's third leading exporter of oil in a country of four and a half million people. It's Eric the Red meets the Beverly Hillbillies. Sometimes so much wealth falls into your lap that not even socialism can waste all of it.

One little consequence of this is that you've got to pay $6.50+ for a Big Mac, according to The Economist's Big Mac Index.

Norway is a huge oil exporter.

Can't speak for Ireland, but Norway has oil...that tends to perturb certain statistics. If a country has a rare natural resource worth extracting, it almost doesn't matter how bad the legal and tax situation is...corporations will go there to extract it. Which doesn't have as much of a positive benefit on the overall economy as being a favorable destination for business overall does, but it does perturb the GDP stats.

I did a post on Norway a while back estimating what it would look like without oil.