So I'm putting together some research for a seminar I have coming up. And not that I didn't know about this before, but it's just so heart-wrenching to imagine this was possible before hand.
A 3% Federal Government Tax Rate. 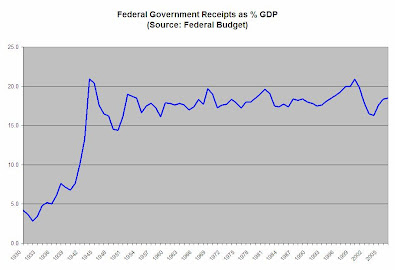 Hell the State of Minnesota alone takes about 7.5% now!
I can only imagine the untold levels of wealth that would have been produced and the insanely high standards of living we'd have if the inefficient behemoth known as the government hadn't been confiscating roughly 1/5th of our wealth for the past 70 years.
$250,000 income per capita EASY by now. Would have landed on Mars. Colony on the moon. Hover cars. X-Box 1280 with Virtual Reality Redheaded Cheerleading Pack included. Elimination of cancer. Working from home. T-90 lines instead of T-3 lines, standard. The true elimination of poverty. Hydrogen cars. China would never catch up to us.
But oh no, but we gotta pay for social security, medicare, medicaid, welfare, statefair, Rickflair, skincare and freaking $21 million for a panel on walking and biking.
Cripes.
Posted by Captain Capitalism at 2:53 PM

Capt'n, this post gives me the opportunity to ask you a question that I have had on my mind, lately. As a Junior Economist with no formal training, but with an innate understanding of human nature when it comes to behavior regarding reward/punishment, what are your thoughts on the proposed "FairTax" plan (http://fairtax.org)?

Assuming a complete and total revocation of the 16th Amendment, and a 23% inclusive sales tax on all purchases made at the retail level, less a monthly "prebate" on the expected cost of the sales tax on the necessities of life up to the poverty level, would this have the desired effect as promoted by the authors?

I've been trying to convince people of a lower tax rate for years, but I always get the idiots who respond with, "But, then the Government won't have enough money to operate." Poor little mindless slaves. If they don't want to put in the effort to be aware of the organized crime known as the internal revenue service, they can bend over and take their whipping from Uncle Sam.

The 1930s probably did not have the high amounts of defense spending that the US needs now, and there was probably no unemployment insurance at that time, but, yes, it could be as low as 5-7% of GDP.

It's interesting to see that Bush's tax cuts were the biggest in US history, I would've thought Reagan's were.

BTW: who pays for the Interstate highways? Federal Gov. or States?

E-mail me at captcapitalism@yahoo.com and I'll give you the details.

That being said if there's large enough interest to fly out to a foreign locale and I can afford air fare and make my hourly rate, I might put on together out of state.

What are the focus of your seminars?

Well this latest one is on the housing market. Seems there's a great push in the real estate and banking industry to ignore the fact there's a bubble that's bursting, so this seminar is kind of like a "emperor has no clothes" on kind of deal.

Otherwise I got other seminars on stock valuation, 401k management, economics. I also have online classes pretty much anybody can take. I won't complain about receiving the extra money from extra enrollment! :)

Got your point and it is a good one about lower tax rates stimulating growth, but you do have a nonsequiter in your post where you say if we'd had a 3% tax rates we "Would have landed on Mars. Colony on the moon." Since there is essentially zero chance of this providing positive expectation no private org would do this because of the vast expense so gov't would be involved and in the race to the moon, NASA was spending 4% of GDP just by itself.