Another Reason The Economist is Biased to the Left

Wow, I mean wow. I know The Economist has swayed left, but geez "Women and Children Killed By Israeli Assault?" 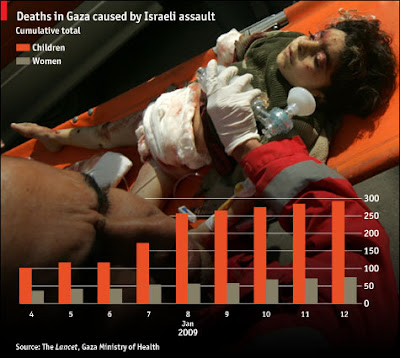 What amazes me (and further convinces me the "elite" in the western media and world are as competent as the "elites" such as Bernie Madoff, Dick Fuld and all the other Wall Street geniuses) is how the concept or just plain reality that Hamas is the one who ultimately pulled the trigger and are responsible for these deaths is lost on them.

I mean 3rd graders could get this kind of logic. It's like saying "How many women and children did the US kill in Japan?"

Oh, never mind the Japanese did it to themselves by kill 3,000 people at Pearl Harbor. Oh, no, that's completely irrelevant. No, it's the country defending itself and having the arrogance and audacity to stop FREAKING MISSILES from landing on its people. How dare they!

You go ahead and keep reading "The Economist." I have comic books to read that are more intellectually honest.
Posted by Captain Capitalism at 9:12 AM

This may not be relevant to this post but, I have a question for you about economics and, I would really appreciate it if you find the time to get back to me on this. But, if you don't get to it, no biggie.

When a President comes into office, the economic impact is typically not seen until a couple of years later, right? I mean, that's typically how it works, right? Was there not a government budget surplus for a short period of time after Reagan's/Bush Sr.'s Presidency? And, wasn't this the first government SURPLUS in, at least 60 years or so? It had been a long time, at least, since the government had seen a surplus, correct? And then, right after Clinton's administration it was a deficit again, right? And, it has been since? So, after all that, my question is: How do you correlate the policies of a Presidential term to its economic impact?

What about the job adverts? Is there another site you would recommend?

I guess when people haven't experienced war for a long time, they forget that WAR IS ABOUT KILLING PEOPLE!

The easiest way to justify the invasion is in my opinion this : Are Israelis and Palestinians of equal worth as humans? If you answer yes to this question, how can you demand that Israel sit by idly while Hamas shoots rockets at their citizens, while you think that Hamas fighting back when Israel invades is justified.

The amount of force used can always be debated, but war has never been about being nice to people....

Like your blog btw, waiting for a copy of your book to make its way over the Atlantic.

Is there any other international economics news magazine? I'm looking for something that is comparable to what The Economist was like before they were hijacked by leftist terrorists.

To Dr. Kill, the website Job Openings for Economists is a good place to find jobs for people with a masters or PhD in Econ. It is mainly focused at PhD's.

You are correct. Economic policies, even if they are efficacious, have lags.

First is the recognition lag - the time it takes to determine there is a problem.

Then there is the effect lag - the time it take for the enacted policy to have the desired impact.

The length of these lags are unknown, variable, and beyond a policymaker's control. So a valid criticism of stabilization policy is that if you mis-time the prescription, you cause more damage than good.

The effect of Reagan's tax cuts lasted well into the 1990's.

The recession in first quarter 2001 was clearly the result of Bill Clinton's policies. The "surplus" was illusory - an accounting trick - and largely from cutting Defense.

Bush's tax cuts took more than a year to have any effect.

The housing bubble was 10 years in the making from bad policies began by Clinton and continued by Bush.

The Wall Street Journal is probably the only haven of good journalism left.

Best thing to do imho is to take their data, ignore their social biases, and read the intellectually honest comic books, too.

"I guess when people haven't experienced war for a long time, they forget that WAR IS ABOUT KILLING PEOPLE!"

Genocide is about killing people in general. War is about killing soldiers. Is Israel justified in retaliating to destroy Hamas? I sure think so. I'd just like to point out that Hamas starting a fight isn't a blank check to kill civilians, so Israel should still take steps to minimize civilian casualties. After all, Israel maintaining the moral high ground is important for them to continue to receive foreign support. I hope that Hamas will be destroyed and civilians spared, but I don't expect much. Fighting terrorists among civilians is dirty business and always will be.

Anonymous, if you're trying to attribute the Clinton budget surplus to Bush Sr, it's not going to work. Clinton reformed medicare and slashed military spending; he actually reduced government spending, which is what created the surplus. A good old fashioned government deadlock in Congress prevented much new spending.

There was a deficit after the Clinton administration because the Bush administration oversaw the biggest increase in government spending in more than two decades.

"How do you correlate the policies of a Presidential term to its economic impact?"

You basically have to make stuff up and convince people that your interpretation is correct. Economics doesn't allow for any kind of formal experimentation; circumstances are always unique and there can never be any identical control group to test your changes against. We can't know what the US would look like if Dole won in 96 instead of Clinton, for example.

There are more factors at work in the US economy than anyone cares to admit or deal with. Hell, the new Keynesians who currently hold sway in Washington don't even acknowledge the heterogenity of capital, blinding themselves from meaningful economic analysis in favor of cooking up excuses for more government spending based on what amounts to little more than wild-guessed fiscal multipliers.

You see, they can't magically divine the underlying cause of the complex economic phenomena before them, so they try to fit a curve to the existing data (what they've got, anyway) and then proclaim it as gospel. In my view an economist who thinks he can fine-tine the economy because he's figured out a model that he thinks is an accurate reflection of the economy is at best a harmless ignored crank and at worst a policy wonk.

A staged photograph with bogus stats. Why does anybody listen?

You can add to your list Scientific American, which has become little more than a global warming rag (and also includes standing articles on economics with very silly conclusions).

It finally hit to me how economics can be related to almost anything. For example, price caps and the inauguration parade. The city won't let people line up before 4am for the parade. This is in affect a price ceiling, because it caps how much people are willing to spend (in this case, their time) on a good (their view on the parade route).

Obviously, this price ceiling is going to be below equilibrium point, so you'll have a black market emerge. In this case, people will just show up whenever the hell they want so they can see the inauguration of a che supporter, but won't know what to do because the city won't have volunteers out to help.

Just thought I'd share my epiphany with everyone else.

"Obviously, this price ceiling is going to be below equilibrium point, so you'll have a black market emerge."

Also, all the white people are to report to the cotton fields at 6:00 a.m. Monday morning for orientation.

Ryan, well stated. I'd like to think that with a black now as president the rest of that ilk would stop all their bitching and complaining about "Whitey", but they won't...it's too ingrained in their ignorance and victimization mentality. Could civil war be just around the corner??

I wasn't predicting a war, I was just making a joke.

I think we'll see more support for bad economic policies in the next few years, since Obama endorses a whole buffet of economic stupidity (protectionism, minimum wage, socialism-lite, etc) and OBAMA CAN DO NO WRONG.

After a few years of Obama's policies turning a recession into a goddamn catastrophuck, we'll get to listen to people who don't know anything about economics tell us that McCain would be worse. I can hardly wait.

Your "joke" was pretty much what is being wished for...it just hasn't been stated in public yet.