Found this in the local leftist rag; 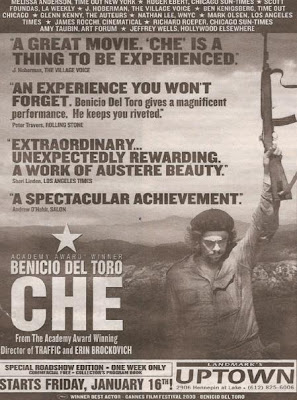 No doubt to be followed by popular sequels such as;

See, if you are a mass murderer that is a leftist then it's alright. But if you're a capitalist, then you are a....fuck it, never mind.

Let's just celebrate mass murderers. Long as they're of a certain political stripe they're killing of thousands is perfectly alright.
Posted by Captain Capitalism at 12:36 PM

It doesn't make sense... You forgot MY favorite mass murderer of all... Saddam Hussein. He was so dam* insane.

Prediction.
Ammo to become very scarce is the near future.

Can't find a reference, but he was responsible for around 14,000 executions. So in theory the movie could contain 0.9 deaths per second.

I know - it's maddening. I guess it's ok to murder people if you are a socialist or a communist. At least then you are not Selfish. I'll take a selfish man over a murderer any day!

You have to break a few eggs to make a delicious socialist omelet (which we will then all share equally, regardless of your contribution...from each according to his ability, and all that).

Anyway, it's not murder when you're just trying to make the world a better place for everyone. Well, ok, not everyone.

"Prediction.
Ammo to become very scarce is the near future."

Hopefully not before we run out of lefties. :)

Here's how I always wish to remember Che...cold and dead on a slab: