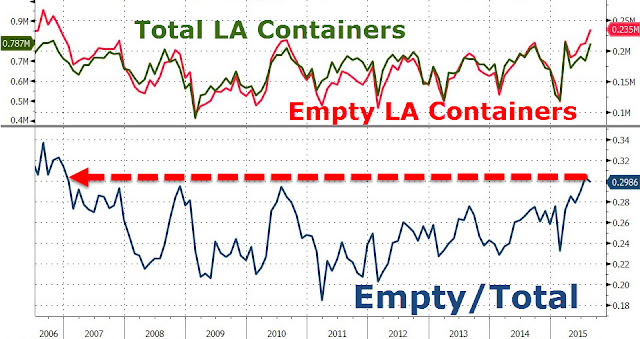 I love the comment about solving the problem by melting down the containers down into steel, shipping it (in containers) back to China where they'll make new containers.
Jobs in America and China and it'll also reduce the empty container problem.
Keynesian gold!

glad I don't take my financial advice from zerohedge..market is up 200% since their site went live in 2008

What matters is exports, which keeps making news highs, not the number of empty containers. The link between economic performance and the Baltic index is very weak because the Baltic index is more of a reflection of the heath of the shipping industry than the overall economy . IF new ships are built, rates fall and the index falls, regardless of economic activity. In 2008, prices spiked due to an under-supply of ships, not because the economy was booming. And now the index is weak not because of recession but because of a glut of ships and falling rates.

Couple that with the Baltic Dry Index, and it ain't a pretty picture

bullshit, the thing making American goods more expensive is that nearly every country on earth except the US jacks up import fees in order to keep locally produced goods competitive and protect their economies because they aren't fucking morons.

you want to solve the economic problems of the US and take a crack at paying off the national debt Step 1 is to stop trying to be the "nice guy" and start playing the same game as everyone else by making it cheaper to pay American workers to produce goods locally than to import those goods from overseas even with higher wages and better health and safety regulations.

of course that would require politicians who weren't bought and payed for by those corporations and/or weren't so short sighted that that they are willing to get paid to slit their own throats.

You are confusing the "market" with the "economy". Market prices are artificially jacked up thanks to the fed pumping billions of dollars monthly. That money unfortunately has done nothing for the economy. The economy is people buying and selling goods and services, not corporate stock buy backs.