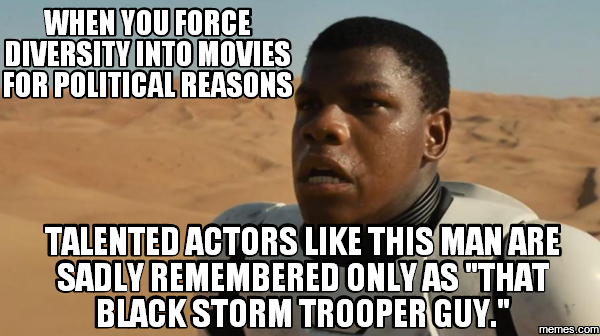 Same thing I thought when i saw the "black guy" in the commercial for the new movie. 'Great, now we're diversifying star wars'.


Hey, you freakin' hollywood idiots. You already have wookies, ewoks, whatever yoda is. any science fiction movie is essentially diversified if it has aliens in it; but no; its not really diversified until there's a black guy.

By doing this crap, they just changed star wars into a movie i'll get around to seeing when it fits my schedule and probably when it's about a week away from the dollar theater so i can pick my section of seats.

When I heard that Disney had bought the Star Wars franchise from Lucas, I KNEW that they would insert their PC/SJW/Feminist crap and drivel into it and ruin it. Although I was a big fan of Lucas's original series, I hope this one bombs BIG time, just like the 'reboot' of Terminator and all of Pixar's similar crap (e.g., Brave, Frozen, etc.).
Television is essentially worthless to watch because all of the MSM's similar PC/SJW/Feminism drivel, the 'big screen' film industry is well on the same path.

Let's not forget the girl in it who is going to beat up men twice her size.
Don't worry though, the bad guys are sure to all be white males. She and 'the black guy' are going to beat the white patriarchy!

Here is a great video for you to watch if you have the time:

The sad thing is, I'm beginning to suspect he's a good character; but much like advertising Mad Max as a feminist movie, the obvious gender-swapped Luke Skywalker has ruined this for me.

And lets all just forget that the storm troopers were a clone army, cloned from Boba Fet, Bounty hunter (whatever race he was. One of the actors was of Moari descent. you can't get more diverse than Moari). So, the entire clone army should all look like Boba when the helmets come off.

why don't i care that there's a black guy in there? why do i remember a guy called lando calrissian? what's wrong with me?

i'll tell you what pissed ME off; how stupid that astromech robot head on a ball thing looked.

the franchise wen downhill after the original three

Hey, I have an idea,

They could make a storm trooper platoon comprised of one black, one white, one first nation, one brazilian, one peruvian, one mexican, one chinese, one japanese, one vietnamese, one burmese, one australian, one arab, one check, one russian, one ukrainian.

I wonder if everybody would still remember that black storm trooper guy or if he would be drowned into the diversity.

How about they rename the movie: Black Wars and call it diversified ? LOL !

When you watch the movie, he'll no longer be "that black storm trooper guy". He'll be Finn, the protagonist.

I'm like Bill Burr here: Go Fuck Yourself. Star Wars is played out.

From what a friend told me, they managed to get the writer who did The Empire Strikes Back & Return of the Jedi scripts to work on the script from this one. If past experience has taught me anything about fan loyalty, it's that star wars fans won't care about there being another black character in the star wars franchise films anymore so than they cared that the role of the bounty hunter had been re-cast with a Polynesian actor. If gamergate is any clue, the moment the fans feel the movie has failed to remain in sync with the previous movies, the extensive library of stories, comics, and tv shows made thus far, is the moment we will know of their dissatisfaction. Like a disturbance in the force, Disney will feel those folks disdain. And let's be honest, they need them to legitimize this film and spread word praising it, cause not a lot of folks are having kids these days.

Just saw the official Star Wars movie calendar: not a single white guy in it, not even the rebel pilot on the poster.
Your diversity is being served and it excludes any role models for young white boys.

Since when do storm troopers ever take off their helmets? Not in any of the previous movies. Therefore I think we can conclude that this one took off his helmet for the sole purpose of showing the world that he was a black guy.

CA3, from what I understand, the new trilogy is a reset of post-ROTJ history. The hundreds of books and comics set in the post-ROTJ universe are now "alternate history" and can be safely ignored.

Cappy, ignore the previous paragraph. I know you don't give a sh$t and think we are nerds for even caring about a "history" of something that is totally fictional anyway. Maybe you can rant about us on a podcast like you rant about sportzball fans.

You didn't bring up the homosexual?