Many years ago, and by "many" I mean about 20, I decided to embark on a mission to pull all the data I could and empirically prove or disprove all the economic philosophies and beliefs I held.  In short I didn't want a "philosophy" or "belief" or "ideology," I wanted proof.  I was sick of arguing with leftists and liberals, sick of wasting logic or common sense on pointless college-student-late-dorm-room-night debates, and all I wanted was some simple, mathematical proof I could point to and say, "There.  Now have a cup of STFU."

And about 20 years ago, I did precisely that.  Arguably one of my best charts I ever compiled proved me correct - government spending as a percentage of GDP versus economic growth.  Albeit boring and now making your eyes glaze over like Ben Stein in Ferris Bueller's Day off, the chart showed a NEGATIVE correlation between government spending and economic growth with a correlation coefficient of around .3.

The problem is that was 20 years ago and the data I had was not the greatest, merely what was available on the OECD at the time.  So I figured it was time to pull new data and see if this relationship still held true.  And boy howdy has it! 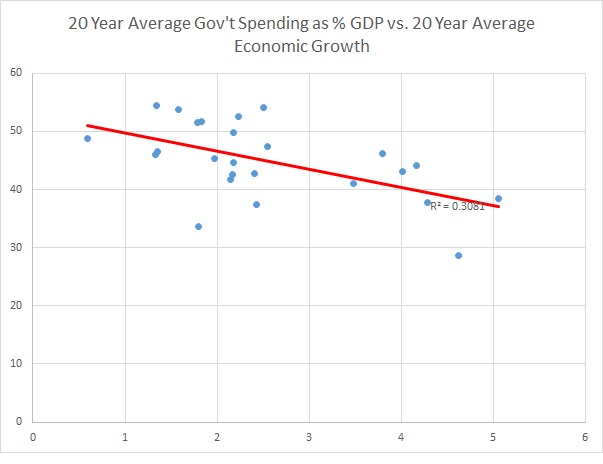 Not only did the relation between government and economic growth continue to be negative, but the strength of the relationship increased to a correlation coefficient of -.55 (-.56 if you only use a decade's worth of data).

Now like all economic studies there are caveats and considerations.  The data above does not include Japan, Canada, New Zealand, Mexico, China or Greece.  I have NO idea why the OECD doesn't have enough data on these countries to make a 20 year study, but they simply don't (though the 10 year correlation I calculated DOES include Japan).  So it's merely the data I had to work with.  And of course, the OECD does not include most 2nd and 3rd world nations.  Only the nations who have been providing them with their economic data.  Still, all these asides, if we are to look at the EMPIRICAL EVIDENCE economic growth is VERY NEGATIVELY correlated with the size of government.  Even more so since you'd think SPENDING as a percentage of GDP would correlate positively with economic growth...but that is in a deluded Keynesian wet-dream world.

Regardless, this new data only merely re-proves what we all know to be logical and common sense:

A freer people are a more productive people.  If you let people keep the majority of their wealth and fruits of their labor they will work more, create more, innovate more, and your economy will grow more.  It's not only logical and empirically proven, it's simply moral.  Of course, the parasites of society will whine and contest and complain otherwise, desperate to use the force of government to enslave you to support them, but it doesn't change the fact that a smaller government results in a better and ever-more progressing society.  The issue is simply if society wants to vote for parasitism and dependency of excellence and independence.
Posted by Captain Capitalism at 7:00 AM

Ikd..I think what happens is the weak growth precedes the spending, so the two overlap. it's not that the spending makes the growth weak. interesting anyway

I thought you would like this although I don't think it is considered volunteering if one is receiving something tangible. http://www.breitbart.com/big-government/2016/03/29/new-food-stamps-work-requirement-results-in-more-volunteers/﻿

Or, y'know, just Google "Rahn curve". It's not like you discovered anything new here, Cappie.

Correlation caveats etc. However, it is interesting that a small reduction in government spending seems correlated with a large increase in year on year growth. I had always thought the effect was a bit slower.

Government spending is still salaries. It all gets turned into consumable goods somehow. Sometimes there is a bridge or a highway left behind but normally government provides services which turns money into turds.

Government raises taxes on me, and that increase comes right out of my surplus that I save. So right there they took money that was all going to be invested in the best returning business that I am aware of, and turned a big fraction of that money into welfare checks for single mothers, or grants for art installations, or reports that no one reads, or what have you. Very little government taxation is "invested"

It seems painfully obvious that such a correlation exists. The "problem" is that the economic growth goes into the pockets of prudent people who save, not dreadlocked nitwits with liberal arts degrees!

>>>>A freer people are a more productive people. If you let people keep the majority of their wealth and fruits of their labor they will work more, create more, innovate more, and your economy will grow more.


I would argue that Aaron and Bernie are not to far off from each other here...the only difference lies in who they think is illegitimately taking the people's fruits of labor (the government vs. The Rich.)

I'm not convinced it isn't both

grey enlightenment, are you saying that the majority (or the whole) of countries inherently or eventually lack the ability for economic growth due to the cultural/psychological/intellectual background?

@Grey Enlightment - Why do you "think" that? Show some data to prove your opinion. I guess you explained it yourself with saying "I don't know".

There are a lot of variables at work and trying to prove it one way or another is very difficult. There was a paper in 2010 that came to this conclusion but was best by potential flaws. IF the govt. is spending billions on defense and other programs, it's going to help private companies. As for crowding out, the govt. is not supplying the good, but only funding contractors to make the goods. For example, a fighter jet contract. The is how should the money be spent? On more welfare spending or on growth initiatives, defense, and lower taxes.

What is so great about economic growth anyway? Most of it makes the country worse. "Economic growth" is an obsession of economists.

Most economic growth now is simply driven by immigration and asset bubbles.