How Many People You Will Date Before You Marry

I was invited to speak at the Rule Zero seminar, which will be held online October 2nd and 3rd.  And while the lion's share of the speakers' topics will be on how to get the girls, mine will take a more actuarial and practical approach - "Analyzing the ROI on the Pursuit of Women."  AKA - "Maybe You Ought to Rethink Getting The Girls."

Regardless, mathematically calculating the "ROI on the pursuit of women" has forced me to dust off the ole economist skills, fire up my model programming abilities, spend hours pouring over data, and spend just as many hours merely thinking about whether said data and said model is calculating precisely what I want it to.  And while this is the first attempt of it's kind to measure "the ROI of the Pursuit of women," the data I've compiled thus far is amazing and insightful, just as it is depressing and tragic.

While you'll have to sign up for the seminar to find my complete findings (which you can do by e-mailing me here: captcapitalism@yahoo.com, and to forewarn you, it's $597), I did want to share a unique subset of data as I believe it not only conveys to both men and women just how much work goes into finding your "special someone, but also shows two completely different dating strategies between the sexes, which in turn might help you adjust yours for better chances of success.

This subset of data is "# of people you will date before getting married."  It's key to calculating the ROI of the pursuit of women because dating is a very costly and necessary endeavor (for men) in order to find a wife.  Dating, however, takes on a very different nature for women because while it is a time investment on their part to go on dates, they actually profit from it economically as the majority of dates are paid for by men.  Additionally, women do not "get dates" as much as they accept or reject them, further reduing whatever time investment they need to find a potential husband.  This difference is made very clear in the number of dates the average man goes on before finding his wife compared to the number of men women date before finding their husband.

In other words, men date roughly 7 times as much as women, implying investment costs 7 times that of women.

But whereas a 7:1 ratio is very interesting in any activity between the sexes, there's an additional interesting tidbit within the data.  For whereas the female data is relative stable averaging around 11 men per marriage, the men's data is slightly bimodal.  The vast majority of men only manage 20 women to date before marrying (a majority of which is 10 or under), but another group of "serial daters" forms breaking the 100 and even 200+ line. 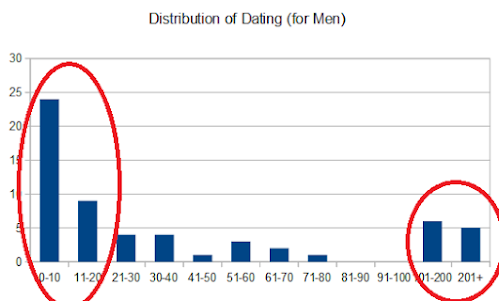 Interestingly enough (when age data was provided) these are not necessarily your older men who lived long enough to date that many women, but men in their 20's, 30's, even 40's, who were epitomal "players" that just dated a TON of women, almost to the point it would have to be a part time job.  Furthermore, many of these men never reported marrying, just dating, posing the question if they even had intentions of marrying and should therefore even be considered in the analysis.

Regardless, if you have a keen eye you'll notice that there are not as many data points as a serious statistician would like.  And as is often the case in economics, "You don't go to the war with the army you'd like.  You go to war with the army you got" and this is the data I got.  The data comes from a highly un-scientific video I put together since there was no other data or studies available measuring how many people an individual dates before marrying, so (like many economists) I had to go and create the data myself.  But if you were a kind and charitable soul and wanted to help improve the integrity of the data, posting the following in the comments section would definitely help:

Additionally, if you were interested in attending this seminar, you can certainly e-mail me here at captcapitalism@yahoo.com, but tune into a pre-seminar show where me and the other speakers at the seminar discuss our topics and provide a little bit more information:

Posted by Captain Capitalism at 7:15 AM

* By date the event I am supposing the social interaction is expressly scheduled (even zero seconds into future) and planned to occur in public (somewhere else), i.e. no mere hookups at the bar and straight to her place or mine. If mere hook-up and repair to sex location counts as 'dating', then my unique date count would be more like 30. My date numbers are guesstimates. I think I've forgotten things for my mental health. The ROI must be infinitesimal for betas and gammas (CH system). If I can't assume the alpha role, I don't play. I don't play.

Interesting approach, Cappy. Not sure the difference between 1 in a million or in a googol matters. Remember to give the fine print: "Past performance is no guarantee of future results." The odds can only be getting the opposite of my penis.

I think your data is suspect.

If men are dating (on average) 70 women, then there has to be a closer correlation than 7:1 for women dating men.

Or some women don't date at all.

I think the women are lying about their number. Or the men are.

Ah, yes, but you need a story to go with your numbers, so stuff your temper tantrum. :-)

Try this one: the male numbers are bi-modal because they represent the difference between r-selection and k-selection, whereas the female numbers tend to show r-selection.

Fuck-And-Chuck Chad behaves more k-selected because he's only willing to endure LTRs, MLTRs, and so on with women who show they can be worth the bother, whereas Beta Brad more or less behaves the same way as his Beta Betsy counterpart.

As for the Gammas, Deltas, Epsilon Minuses, Omegas, and so on, they tend to pair off with like-kinds in an r-selected way because the people nearest to them are the only ones where there's mutual toleration.

You were lucky to see the bi-modal distribution for men because of sampling bias for it, as in there are guys showing up to provide you with data who are self-selecting for this type of information.

Once again, you are in better hands than you should be. :-)

The average number of men dated and women dated per heterosexual marriage are mathematically equal under reasonable conditions.

Women are not counting one-night stands and f*ck buddies, only potentially serious relationships. Men are counting every meeting where they spent money.

This raises an interesting statistical optimization problem (see Wikipedia's "Secretary Problem"). Most people will only seriously date 10-20 partners before marriage. After rejecting someone, you can't go back. Under these conditions, you maximize your chance of getting the best one by dating 37%, and then marrying the first one who is better than all previous relationships. For example, if you can only sequentially date 11 people, then you should date 4, and then keep dating until you find the best.

An interesting article, thought my numbers were really odd.

All 3 women where I actually dated them, I was under 22 years old. In my mid 20s, I changed to a find, fuck and forget strategy by having one night stands with women at parties and sometimes bars. Around age 30 I just lost interest in all of this.

I wonder what my total # would be if I kept going for another decade. But I don't think it would be that much higher.

Thought my #s were kind of weird. Maybe not.

All 3 women I dated I was under 23. In my mid 20s I refused to go on dates and switched to a find, fuck and forget strategy and had one night stands only with women from parties mostly and a couple I brought home from the bar.


I stopped chasing women completely around age 30, but doubt my numbers would be that much higher if I kept going for another decade.