On October 2nd through the 3rd I will be speaking at an online seminar with the guys at Rule Zero.  Each of the 10 speakers has their own topic.  Mine is going to be "Analyzing the ROI of the Pursuit of Women."

While my model is about two pages long and it's final number tallied at the bottom calculates the actuarial chances of finding a woman in today's market that will make you happy, the sub-data that goes into this monster of a formula is interesting (and depressing) unto itself.  Not so much because of the dire statistics it indicates, but because of what it tells us about young women today in terms of their behavior, choices, and desires.

In this case the percent of women that are both overweight and obese of child bearing age. 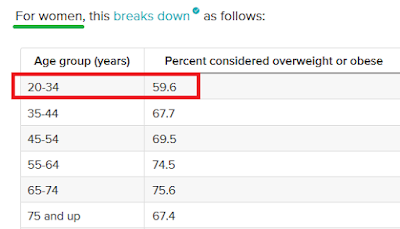 This is such a damning statistic because it tells us young women would rather eat food than attract a man.  This means, by choices women put forth in the real world (not what they may actually "feel" inside...whatever that means), women would rather eat more than fall in love.  Cryptic and cold as that may sound, it's true.  Women's public behavior today shows very clearly what their priorities are and attracting a man ranks below "Another Hoho" or "Exercise."

Now, admittedly, men are only slightly better when you look at their obesity rates.  And that is true, much as men might pine for a svelte women that's in shape, they are equally hypocritical when it comes to putting down the hohos and hitting the treadmill.  And while I could make the statement that men are more interested in a woman's physique than women are men's, thus it's incumbent upon women to lose the weight first, it's important to look at why both sexes are practically hurting each other being the overweight disgusting slobs they are today.

Right as it might be to point out the revolting levels of young-adult obesity, remember that until very very recently in human history, starvation was the number one problem facing all of humanity for nearly all of its existence.  The human body has evolved to become incredibly efficient with food, what sparse food it could find for the first 2 million years of human existence.

But with the advent of farming technologies, the agricultural revolution, and bio-hacking the genetic code of various crops and animals, we've been able to solve hunger. So much so I've seen "poor kids" go from genuinely skinny, underfed children to fat, bloated tubbies dining at the 7-11 on their single mom's EBT card.  Humans have not necessarily gotten lazier.  The technology to make food has just advanced that much quicker.  So quick our genetics cannot evolve fast enough to account for it, thus why your average young woman is 5'4" and 165 disgusting pounds.

Still, evolutionary or genetic reasons why only 40% of young women today are attractive, doesn't change the slim (or rather should I say "not so slim") pickings men have today.  Women simply cannot shuck their genetic conditioning and put down the food, thus making reality women prefer food over men.  Additionally, the same condemnation can be made at men, being the disgusting pigs they are.  So if either of the sexes wants to have a happy life (which requires a handsome/beautiful person from the opposite sex to attain), I suggest we all start losing weight.  But since it is women's beauty that prompts men to ask women out, and thus initiating a potential relationship, it's incumbent upon women to inspire men to do so.  Besides, you women love to lead and "change the world."  Let's see some of that "strong, independent, girl boss" leadership we've been hearing so much about these past 40 years.

(Oh, and if you are interested in attending the seminar, e-mail me at captcapitalism@yahoo.com)

Posted by Captain Capitalism at 6:48 AM

Absolutely right; however, one other thing that's changed is that jobs aren't as demanding as they used to be; tapping buttons on a computer or pushing a hoover around can't compare to hwavibg spuds (potatoes) or working a mangle. It'd be interesting to correlate the rise of obesity (for both genders) with how mechanisation made thinsceasier, especially in the latter part of the 20th century.

Yet women of not all that many years ago were not the level of Fat or Obese thta they are today. Especially young women, but even the older generation. TOday's women are MUCH fatter than they were 30 or 40 years ago. And we had nearly as much food then as we do now.

Gay's don't seem to have problem staying in shape to attract other males. So I agree, women love food more then men.

I guess having your cake and eating it too led directly to the Fat Acceptance movement.

I guess having your cake and eating it too led directly to the Fat Acceptance movement. Good article, Cap.

From what I observe, this phenomenon is *highly* dependent on economic position: women earning a lot, or married to husbands who earn a lot, tend to keep their weight under control pretty well compared to others.

It may be that *eating too much* is often a compensation for other things missing in one's life: job satisfaction, social status, relationships, sex.

Cap'n, you're absolutely right. I have spent far too long in the cesspool of modern dating, and I've witnessed this shift to female fatties in real time. When I first was using online dating services (eHarmony about eight years ago), there were a good number of attractive, normal-sized girls. In 2020, almost every girl on any of the apps (Hinge, etc.) are Oreo Cakesters (my euphemistic term for fat girls).

I am dating a very sweet girl now. She is a bigger girl, but she doesn't match that with a bad personality. She's also following my example on portion control and calorie counting, and she is already losing weight effectively. I was a chubster until I hit 26, and shed around 110 pounds over the course of 2011.

One final note: I found your blog via photog's blog, www.orionscoldfire.com. Great content you've got here! You can check out my blog (no obligation, just if you're interested) at www.theportlypolitico.com.

“ young women would rather eat food than attract a man“

That’s not the choice feminism has programmed into them.

Men SHOULD FIND THEM ATTRACTIVE DAMMIT BC THEY ARE BIG AND BEAUTIFUL!