Why Bars Should Turn Off the Sports Channel 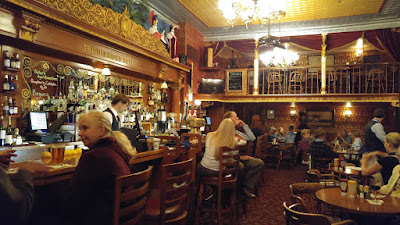 I am a connoisseur of American bars.

Be it the hoity toity bars sitting atop skyscrapers in downtown areas, serving $300 pours of scotch,
The run of the mill franchise bars such as Applebee's and Ruby Tuesday that dot the suburbanite landscape,
The classical dive bars that have hide out in the country's major metros, yet to be affected by gentrification,
Or the quiet token VFW or corner bar that every prairie state small town must have,

my motorcycle adventuring combined with alcoholism has ensured I've sampled my fair share of bars in these United States of America.

But one thing has remained consistent.  A universal constant that you will find in every bar in America, whether you're in the desolate prairies of North Dakota or the schwankiest of schwank bars in the up and coming hipster area of New York City.  You apparently need to have the sports channel on.

I find this annoying on several levels.

First, just because ESPN or Sports Center is on, doesn't mean there's an actual sport being played.  Much worse are the limitless number of post-post-pre-post-pre sports shows that analyze either a game that was just played or speculate about one that is about to be played.  If it was just one show immediately before or after a game was played, I could understand.  But these channels manage to speak blather 24-7, whether or not there is something worth talking about.

Second (and worse), sports commentators put on the veneer that what they're talking about is important or some kind of science. There's analysis, graphics showing the projection of the ball as if the quarter back did some geometric calculations before throwing it, and my favorite, where old retired players go out onto the field in suits (and tennis shoes) and explain to the arm-chair slob the "science" behind some kind of play re-enacting it with their knee replacements.  This is only outdone with the quasi-political sports analysis show where they cover the latest news in the sports world as if it were "This Week in Washington."  It's so painful I've often asked the bar tender to turn off the television or change the channel to AMC.

Third, though I appreciate a good game, much like political talk shows, female day time talk shows, or CNBC, 75% of sports channels' programming is just mind-numbing drivel.  And I don't mean to say it's boring.  I mean it's MIND NUMBING.  It's painful.  It's painfully pointless, it goes nowhere, it does not feed your soul or even slightly entertain your mind.  It does nothing to advance you or improve your life.  Now, admittedly I'm not your rank and file normie who wears another man's jersey drinking light beer at the local sports bar, horking down wings.  Nor am I a dude bro who actually thinks there's a science or some kind of important analysis being conducted as I stroke my chin and call into sports talk shows to share my opinion why I think Bart Starr was a better quarterback than Brett Favre, as I contemplate majoring in Sports Management.  But though I'm in the minority when it comes to America's obsession with sports, you can't tell me that the majority of men (and women) sitting in bars today are watching, even paying attention to what is being said on these various sports channels.

If you run a designated "sports bar," then of course, the whole point and purpose of your bar is to show the game, the pre-game show, the post-game show, and the pre-pre-post-pre-post-post game analysis show.  Open up the bloody mary bar, get out those wings, sell light beer at a discount special and open up the door for the hoards of other-mens'-jersey-wearing-men and they cheer on "their" team.  But for the remaining 75% of bars out there, sports channels are lessening the experience.

I go to a bar to converse with my friends.  Whet my whistle after a long stint on the motorcycle.  To appreciate the wood work of the actual bar and the architecture of the bar itself.  Often times just to see what the locals look like so I get a better feel of America.  I even appreciate how they stack the bottles of booze to make an almost cathedral like work of art (eg. below, the St. Paul Hotel's bar in St. Paul, Minnesota) 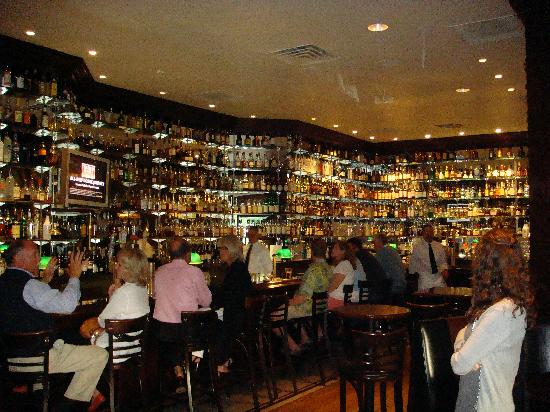 All of that is ruined if you have the sports channel on, just like a loud thunderous fart in church.  Sports analysis shows, faux sports "analysts" and "sports news coverage," and pre-pre-post-post-post-pre game shows ruin the ambience, ruin the experience, detract from people's intelligent conversation, prevent people from bonding, and lessen the overall bar-going experience.  You are introducing a low-brow, idiot-talking heads level variable into what is likely a 115+ IQ environment.  At best people ignore it, but most cannot help but look at the TV since it's being shoved right in their face.

But there is another more compelling reason for non-dedicated sports bars to consider turning off the sports channel, or perhaps ditching the TV altogether.  Social media and smart phones.

I don't know if you noticed but your younger bar-goers are not watching the TV as much as they are their smart phones.  And even if Jimmy McShootzemgood is providing his analysis of the recently completed Vikings Bears game, they really do have more important stuff to attend to on their smart phones.  This doesn't mean your older clientele won't occasionally look at the TV, perhaps show up if there's an actual game on, but how much money would you save if you got rid of the score of flat panel TV's you have in your bar and got rid of your cable subscription?  And would it cost you more in lost customers because you "didn't have the game on?"  Admittedly many bars' business models rely on having the game on and showing sports to the bread-and-circus-consuming masses, but out of pure curiosity and experimentation could you just try turning off the sports channel for a week?  Could you switch it to AMC or the cartoon network?  I think you might be surprised, especially if you're a higher end bar, just how little sports brings in customers, and how much money you'd save on a cable bill.

Again, this is not a call for all American bars to turn off the TV's.  I understand the Normies of America need there "sportzball" and the critical analysis thereof the sports channels provide.  But for those of us who just want to have a drink, chill out at an old oak bar, talk to the patrons at the American Legion, or not have our eyes and minds raped with the stupidity that is the sports channel, would you mind just changing the channel or turning off the TV just once to see what happens?


Posted by Captain Capitalism at 8:31 AM

I can't stand watching pro sports on TV because the commentators take it too damned seriously, like it's life and death.

I can't stand watching pro sports on TV because the commentators take it too damned seriously, like it's life-and-death or something.

It's kind of brilliant if you had an old fashioned style bar (wood panels, etc.) having black and white classics running in the background all the time would be perfect.

The Green House in Denton, Texas. Old time bar with western feel and AMC on the only two TVs.

There's a guy who created a device called TV-B-Gone that will help you simply shut off these TVs wherever you find them ...

Buy one for North American and Asian TVs, another for European TVs, and you're set.

Obviously it won't work on banks of TVs set up for big bars that are fed from a central distribution point, but it works great for small bars with small TVs that have remotes.

Well maybe they can get this lady:
http://metro.co.uk/2017/12/14/doctor-tells-woman-much-sex-can-handle-treat-bipolar-disorder-7158396/?utm_source=fark&utm_medium=website&utm_content=link&ICID=ref_fark

to hang around and then nobody will care if the telly is on or not...

Any bar or restaurant I go to, I try to chose the seat that faces away from the TV. I do not want my dinner spoiled by television. Sports bars that is of course impossible, so I don't go there. At all.

That's not sport you are talking about. It's games.

Agree. Can't stand restaurants with them either. Even our local Dairy Queen has a TV on... ick... CNN and another on ESPN.

How about taking on HNN or CNN on at every gate at every damn airport in the USA? Grrrr.

Someone mentioned the TV-B-Gone. What the world really needs is a hat covered in covert infrared transmitters that constantly stream the "turn off" command for every TV in every direction all the time.

my motorcycle adventuring combined with alcoholism has ensured I've sampled my fair share of bars in these United States of America.

Alcoholism? Cappy, you have done more for saving a generation of young men than anyone I know. Please do not go and die on us. I know a gifted writer who will be forever unread. She died at age 36 from heavy drinking combined with diabetes. There are a lot of vitamins which suppress the desire for alcohol. The info is on the net.

Take care of yourself my friend.

First, just because ESPN or Sports Center is on, doesn't mean there's an actual sport being played.
The last time I was in a sports bar it was noon, went for their lunch special. All the TVs were on and had either ESJWN or the regional sports channel. ESJWN was doing some bodybuilding show - y'know, oiled up and 'roided up, complete with the female bodybuilders (that'll kill your appetite if you look at it) and the local sports channel was doing something Orlando Magic related that didn't actually involve a basketball. But here's what was worse, baby-boomer rock at high volume - loud enough that I had to raise my voice just to tell the waitress my order or converse with those at my table. The food was reasonably priced, and the portions and flavor were good. But as soon as the check came, I paid, we split, and I've never been back there again.

Once again, a brilliantly written article that challenges the mundane methodologies of thinking and context!

What Faithless Cynic said about the alcoholism thing. I hope you're joking; if not, whether I agree with you on every topic or not, please take care of yourself.

I can easily stay home if I want to watch the ball game on TV, drink beer and look at my smartphone.