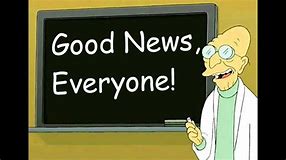 It's rare in part because it doesn't sell, thus main street and alternative media has no reason to report it.
It's rare because society as a whole is deteriorating in terms of quality and caliber.
It's rare because government policy (at least in the west) celebrates losers over winners.
And it's rare because anytime something good is attempted the established powers often prevent it from happening.

But one got past the goalie and I'm happy to share it.  So please share this good news as well because we earned this one.

During my research for "How Not to Become a Millennial" I was compiling data on family formation.  I was absolutely certain that along with the decrease in marriage rates, increase in divorce, and a deterioration just about every other sociological metric, out of wedlock births would be up.  But to my surprise it wasn't. It was actually down.  And not only down, but sharply down from 2008. 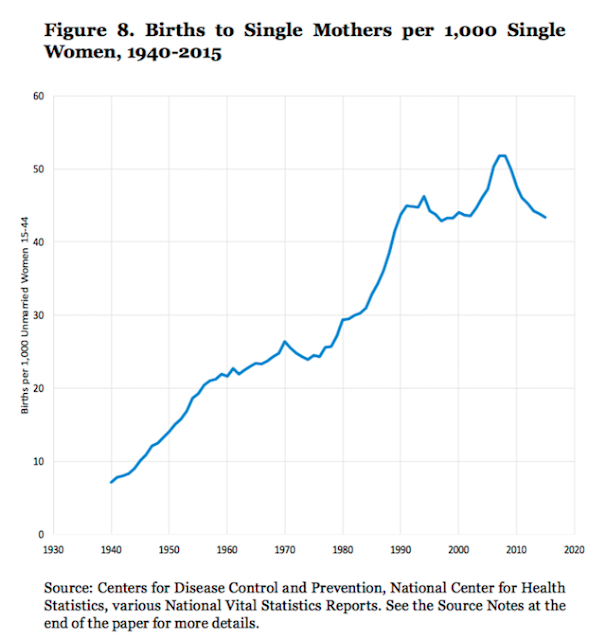 I'm sure there are many and valid reasons for this, some more official than others.  But I cannot help but notice that 2009 is when bandwidth on the internet not only allowed for blogs, but podcasts and youtube channels.  It also coincides with an explosion in social media where people regularly exchanged and posted their political opinions on the internet.

Now the "official stance" according to the dinosaur media, college, government and education industry is that single motherhood is perfectly fine and acceptable. And not only is it fine and acceptable, it's brave, courageous, and amazing.  So fervent did this narrative become, single motherhood became more of a cult and single mom worship became the norm.  But that was the official stance.

The "unofficial stance," I argue, didn't finally get out into the public until the citizens' media in the form of the internet had the bandwidth and platforms to do so. And while Oprah, the Democrat party, and every ancient washed up women's print magazine in the world was still towing the "She Works Hard for the Money" line, young women started noticing on;

Blogs they read
Podcasts they listened to
YouTube channels they watched,

that men were sick and god damned tired of the 24-7, non-stop, "rah rah single mom" worship-bullshit and distinctly did not like, want to worship, nor want to marry, single moms.

Not only was this "unofficial stance" against single moms, but it was so vehement, so clear, and so consistent that young women actually started to pay attention. And while I'm sure some education, access to birth control, and other sociological variables are in part to explain the collapse in single motherhood, I would bet my left nut that men letting their honest opinions about single motherhood be known publicly on the internet has scared young women straight into not fucking up by becoming a single mom.

This is a rare victory for people in the red pill/manosphere/alt media.  Where pushing a counter-narrative the truth against the narrative lies put out by the establishment media, actually brings about the result the rest of normal, healthy, sane people want.  It could indeed be that some government program had great success in reducing the amount of single moms being created, but I would argue it was more the fact that enough men had the courage to say they were sick of single motherhood, they were sick of single moms, we're sick of being asked to raise somebody else's mistake and threw it right back in their face.  And we did it so well that even YOUNG WOMEN listened and are now knocking it off with the single mom schtick.

I'm going to agree with your hypothesis about single motherhood decline and the internet, it less a shot in the dark and more reflective of a change in culture.

I discovered a 14 year old "Sohp" on YouTube before she became recently banned an was describing her Generation Z as the first generation to grow up with decentralized, independent "news" and information and that this was driving a vastly different attitude among people her age.

We've got a long way to go and ,yes, that's a long list but its beginning to look possible one day.

I used to have a hard copy of a research article on how women can stay out of poverty (I loaned it to a student and didn't get it back). Essentially the article said young women needed to do three things to stay out of poverty. 1. Complete a real high school diploma (not GED, not modified) - if you can go onto post secondary ed, great, but there a lots of good jobs and employers willing to train someone with a good high school education. 2. Get into a long term relationship (with someone who also has a high school diploma) - doesn't have to be married, but marriage gives some protection, and 3. Only when you have done 1 and 2, have children.

I tried to include this approach into a session I was giving to teenage girls in a program I was helping out on and it was dismissed completely.

You give women too much credit, which I believe is your competitive advantage socially. I think we are more sexually disgusted with each other than ever. White men on the left are expendable because the white men suckers elsewhere are insufficient fodder for these parasites. The decline metastasizes. I think it makes more sense that women can't find sperm donors as easily, or maybe the payments aren't what they used to be. Of course there's always a willing penis somewhere, but grrrl power doesn't deserve a sucker man. She knows she's getting sucker-loser sperm if she's at all 'educated', and what women are not? Chasing the cooperation of inferiors is very bad advice and very bad hope. Please don't do that. Hope is not a strategy. They want our blood. We should respond accordingly. For now mindset is the crux of a proper response. Negotiation is a clear sign of animal weakness. Animals are always triggered to attack animal weakness.

That's a long list at the end there.
However, I basically agree with the premise.

GenZ has watched the Millennials crash and burn with their Leftist ideas. They may also be children of single mother and/or divorce, living with a "progressive" mother...watching her date an endless supply of men and knowing that, when they are older, they do not want to end up like that.

They could even be watching your channel and being influenced by you. Let's hope they are...you were among my first YouTube influencers that really got me thinking...and, I think it was Aurini that first mentioned you! 😅

Why would any guy want to date an unwed single mom who has never been married?


That's like showing up after the buffet, and someone handing you the bill. And then, you find out you have to do the dishes afterwards.

Cappy, fertility has been dropping across the board since 2008, among all races, with the sole exception of women over 40 years old (using assisted reproduction technologies). The declines have been most pronounced among teenagers and women in their early 20's. This is the results of both biochemical and social causes that will not be reversible in the foreseeable future.

Interesting. Sometimes stealing your opponents thunder is the best offense.

Search on "Empty Planet" for a couple of Canadian demographers who say the world population will stop growing much sooner than most people assume.

The shot has been connected with infertility.

I am sure there are other factors that are in play as to why you are seeing a decline in single motherhood. I am sure the Great Recession as well as an entire generation being in massive student loan debt had something to do with many young people putting off having children.

Me thinks young women are not "waking up," but just adjusting to the reality of 3 generations of single-moms destroying families and being poor. All the government gim-me-dats in the world do not replace "dad." They have seen it first hand or know others who went through the post-divorced shit show and the burnt out dumpster they spend the rest of their days. Most do not know why, but simply are trying to avoid the pitfalls.

Girl power. Where did that get them besides deluding the dupes? Did you ever notice the women who advocated "women in the armed forces" had no idea what they were asking nor did not care to hear the facts of what is required? The gynocracy needs to be over-thrown and eliminated.

PS: I just listened to your rant about the 27 year-old chick with $90k of debt and a worthless poli-sci degree. She is going to go for the masters-- we both know that-- and she is f*cked. But she will not be alone as plenty of women will be living with their life long roommates...debt and crushing poverty.

See you on the flip side.

Hasn't everyone on the Right who goes against the official narratives been banned from Social Media?

I’m a woman a bit older than you are probably referring to here. I discovered you and this corner of the internet around maybe 2009-10. I’d had some libertarian leanings since I was 21, and I wasn’t the worst (would never have become a single mom), but I definitely wasn’t the best, either, and made some dating mistakes. I've now been happily married for 6 years, madly love my husband and will never divorce, have several children that I stay home with, and are thinking about one more before it gets too late. One thing that really pierced through the BS was having hypergamy defined. Imagine as a man if how your sex drive worked was so obscured that every time you were sexually attracted to a woman’s looks, you thought it was true love (I’m sure it does happen this way for some, getting dick-napped etc, but at least people are broadly aware that men can be attracted to inappropriate women due purely to looks.) That’s the situation a lot of women are in when they are told to just follow their whims and feelings in order to find a partner, and having what’s really going on spelled out helps a lot. Thanks also for speaking out about, and walking through exact reasons why, it’s better to stay at home with the kids. There’s extreme pressure in the other direction, but knowing deep down you’re right and that other people see it too allows one to have the strength to continue. Finally, thanks for talking about debt and just generally connecting social phenomenon with economics. Once you see it, you can’t unsee, and having a better grasp of reality helps you make better decisions. Hope this stuff continues to spread.