When the Pronoun Junkies Lose Their Fix 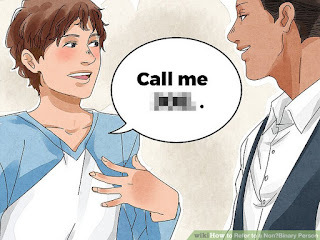 A common observation I like to recommend people make is to go to Target, WalMart or about their normal day and instead of focusing on what the eye wants to - pretty people - to open their eyes to the disgusting and depressing amount of everyday ugly, overweight people.  You sadly can't say "average" because these obese land whales (both male and female) make up the majority of the population.  Thus "average" today in America means hideously ugly, not merely a unmentionable or unnnotable "5."  The lesson to learn from this is to realize just how low grade, pathetic, and deteriorated the average American has become and to let this epiphany guide your actions when dealing with people in the future (most notably, to lower your expectations).

But I had another epiphany and unlike the "Fat people at WalMart" it was a positive one.  One that gives the Ole Capmeister a bit of hope.  One that should give you a bit of hope as well.  And that epiphany was that everybody in public, EVERYBODY I saw was either male or female.

I had this observation while antiquing of all things.  I woke up, debated with the GF as to what to do with the day.  And we decided to go "antiquing" as a means to have an activity to do, as well as a way for me to meditate and have a calming afternoon.  But during the entire process of going to the antique stores, getting espresso, stopping at a winery, and stopping at more antique store, and stopping to get gas, not one "zhe" or "zher" or "it" was seen.  Of the thousands of people we must have seen, there was no sexually ambiguous people.  No purple haired, tatted up freaks.  No "Pats" from SNL.  Everybody, 100% of all the people I saw were distinguishably male or female, or at least non-binary people courtously presenting as such.

This then brings about an important lesson much like the fat people at the grocery store.

Yes, every news article you read online has people championing non-binary genders.
Yes, every time you log out of Yahoo mail, their "news" site jams in your face some F-list celebrity who decided to identify as "quattro-pan-sapio-sexual."
Yes, companies can't wait to get on the virtue signaling bandwagon to show how progressive they are with "pronoun name tags."
And yes, sanctimonious nobodies will always sign off their e-mails or social media with "preferred pronouns."

But the digital world does not represent the real world.  And annoying as these "pronoun nazis" are, they have failed spectacularly in the real world.  They are no where to be seen.  And no matter how much they bang away at the keyboard, it will only be their small digital enclaves that are affected by it, and the even smaller real world enclaves found in the insane asylums known as universities and non-profits today.  Matter of fact you can celebrate these people wasting the time, effort, energy, and stress posting about how they're "him/his" or "she/her" on the internet or at conventions with their name tags because it's ultimately pointless.  Nobody in the real world cares, including most non-binary people.  And nobody in the real world dares to be that much of a sanctimonious prick to people in public.

This then behooves the question why do the Pronoun Nazis do this?  Why after decades, perhaps centuries of non-binary people just living along side us, fitting in normally do some people find it necessary to force and foist personal information about themselves into situations that it is not only uncalled for, but unprofessional and rude?  And not only that, but why does it seem to be straight people, not non-binary people who do this?

Once again, we need to be reminded as to just how pointless, worthless, and shallow most virtue signalers are.  When I get up I have to write, I have to consult, I have to work out, and I have some hobbies or social activities at night.  I have a life, a purpose, a reason to live, and I go about my day exercising this agency.  You no doubt have the same in that you have a job, a family, some hobbies, maybe even a religion to practice.  But the people who have so much time on their hands, the best use of their time they can come up with is making "pronoun name tags" or sign off their e-mails with "him/her" have nothing going on in their lives.  NOTHING.  They are invariably of the leftist political stripe because they demand payment for no work.  They invariably have some kind of welfare job that is paid for either by forced taxation or reluctant charity.  Some may claim to be an 'entrepreneur" but any cursory overview of their linkedin profile will show it's not a legitimate company, and more of a masking of the fact they're unemployed.  And they are also usually ugly indicating the ultimate lack of work ethic because the gym is the ultimate test of work ethic.  These aren't universal traits, but you dig deep enough you'll find out most of these people are losers.

So what do losers do?

Well they need a fix.  They need a drug. They need something that will give them the illusion of purpose and agency, but without all that nasty work, toil, and effort.  And whereas at least respectable losers will get a fix from heroin, booze, pot or cocaine, the left-leaning, intellectual class of losers get it through virtue signaling "edgy" politically correct politics.  Alas, these people are not so much "Pronoun Nazis" as much as they are "Pronoun Junkies."

The problem with being a junkie is that the fix is never enough. You always need more, and you always need a bigger fix, and so you seek out higher doses or perhaps completely new drugs, and the Pronoun Junkies are going to face this same thing.

The day will come that either everybody starts signing off their e-mails with "preferred pronouns," or (more likely) nobody in the real world will care, let alone conform with such idiocy.  I predict a combination of both because corporations sole marketing plan is to be so politically "woke" and "edgy" today, they will more or less force this shit on their unsuspecting slave class of workers, while normal people will just go about their day buying gas, not giving the Pronoun Junkies the time of day.  And once this is achieved the Pronoun Junkie is going to have to find another fix because they're no longer edgy. They're no longer agitating the normal people.  Their crusade/cause has been successful/come to its final conclusion, and they as a person now no longer have any point or purpose.  So they will have to seek a new drug, a new fix, a new political cause (...well, that or they'll have to get....A JOB!  NOOOOOO!!!!!).

What this new cause is, is anybody's guess.  One thing I'm amazed of the left is their ability to create problems that don't exist.  Make themselves a crisis (in their world) and then lecture the rest of society about how evil and "ist" or "ism" they are about said topic.  Be it pronouns, banning plastic bags, banning plastic straws, 46 flavors of gender, the "pink tax," feminism, or complaining about "yard privilege," they are absolutely amazing at finding offense, injustice, oppression, and crisis in just about anything.

But if you think about it, they have to. They're junkies.  They need to find a new drug, any drug that allows them to continue to get the sanctimonious high, as long as they don't have to do real, legitimate work.  Like any other addict, the drug is used to mask and hide the fact their lives have no value, all of which is driven by the fear of doing a 9-5, putting in the hard effort and work being a real productive human requires.  They'd rather be high on a drug, ANY DRUG than come live with us commoners and realize they're not special.  And just like any other junkie, they will waste their lives, accomplishing nothing, doing nothing, and at best have a euphemistic linkedin profile replete with bogus, made up awards, social science PhD's, and a resume of a whole lot of nothing.

These Pronoun Junkies may be annoying, and they are.  But realize just how pathetic their lives are that it resorts to them putting such nonsense at the core of their lives.  Realize tomorrow they will have to find another insane fix.  Realize how "fun" such people must be when such lame activism is what gives them point and purpose in life.  And finally, on your next outing when you go to run errands or perhaps get some food, look around at all the normal people who accurately refer to you as a "he" or a "she" and nobody, ABSOLUTELY NOBODY is saying "zhe" or "zher" because we're not completely mental and have more important shit to do in our lives.

CHECK OUT AARON'S OTHER COOL STUFF BELOW!

Posted by Captain Capitalism at 7:17 AM

I think I will jump on this bandwagon. Start signing my posts and e-mails with my preferred pronouns.

That should cause a few leftists to freakout because I am doing it wrong.

Perfect! "I'm amazed at the lefts ability to create problems that don't exist."

Actually, with all of that thirty-one thousand flavours of insanity, I found Linda Hamilton's recent revelation that she doesn't give a fuck about giving a fuck a rather welcome difference in the news ...

Remember a more "genteel time" when people didn't have to know about the sordidness of people's lives, especially their private lives, but also including all of this complete bollocks about people "choosing" their "personal pronoun" instead of being called what they happen to look like?

You may make some informed guesses as to why you come across as an "it", but quietly, please: we shouldn't need to say "shhh" to the "it" because for some people the situation was already begging for that specific response.

But if we are going to persist with this Pronoun Pretentiousness, I insist ... nay, I demand to be called by my personal pronoun "Fully Armed and Operational Battle Station".

The Force had best be strong with you. :-)

You write as though non-binary person is actually a thing instead of a mental disorder brought on by ultra-permissive societal destruction.

I call this "cargo cult morality"- where one gets the feelz of being moral without any of the hard work involved.
It's easy to sit behind a computer and smugly lecture people about the problematic oppressive messages and inherent cis-het patriarchy of eating Reese's Peanutbutter Cups and thinking how you are Oh So Morally Superior.
Actually getting up and doing something moral and living up to one's code- that's hard.

We need to get back to calling a faggot, well, a faggot.

I play a similar mind exercise when I am out and about. I look at every male between the ages of 17 and 30 and ask myself which ones are potential combat infantry. The resulting answer is damn few. Of the young males (I do not consider most of them to be MEN) it is usually not more than two or three out of a hundred who could cut the mustard in the Army or Marine Corps combat arms. And yet, when you look at photos of groups of young men from the late 1930's and ask yourself How many could cut it in the infantry, the answer invariably is MOST OF THEM. Th this how far our society has devolved since then. We are ripe for the picking, just like the late stage Western Roman Empire.

I usually go for the quick kill on pronoun preferences:

That usually ends it all right there.