Another Chart the Snowflakes Won't Comprehend 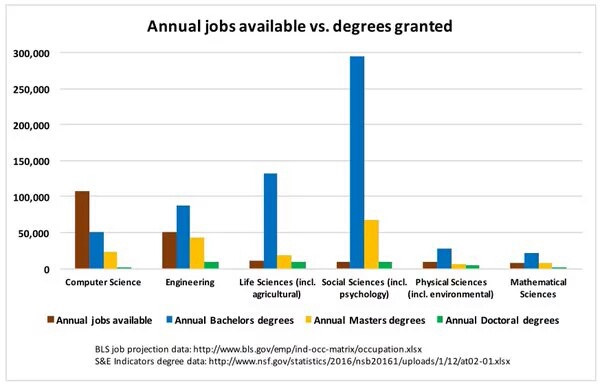 Posted by Captain Capitalism at 6:45 AM

Do you have any data like this for the skilled trades? I think that would paint an even WORSE picture for the Special Snowflakes.

Those people are beyond saving.

Now layer in H1B visas along with all immigration/importation of labor in each category. There is not a single field where the number of jobs exceeds the number of degrees being granted.90% of the degrees being granted (including many of the professional degrees and even some STEM degrees) are effectively made worthless by other policies even in the cases where the degree itself is not (in theory) worthless.

Schools replaced mom and dad, the institution of the family, with their free daycare and they no longer have to offer competitive degrees and academic guidance to attract consumers. They're serving a new client base now. Worthless degrees are yet another consequence of the culture war and the loss of Western Christian America, and leftists still can only think it's about money. The libertarian right is equally clueless about where all of this economic degeneracy is really coming from. Social conservatives are the only ones left standing all along.

Kids were abusing themselves, all the way up to suicide, because of bad grades in my school. If they had any way of knowing back then how rigged the system is they would have gone on a student strike or dropped out ASAP. They would have home schooled, too. There would have been lawsuits. But I don't know what's wrong with these Millennials who just don't get it...

Family destroying schools are like vampires that just fade away after they run out of naive peasants to drain. They have run out of their life blood of social capital, and now human capital faces its decline.

This chart paints a bad picture for everyone except IT guys, we even produce more engineers than we need. Crazy.

At least these are science degrees, is there a similar chart for the Arts and Humanities? Or is the necessary "Y" access too large..

Man, that is beautiful.

That would explain the engineering and other STEM job markets for new graduates looking for work and experienced ones as well.

Even the pay for some in Chemistry and Biology is awful. Might as well work as a manager at a pawn shop.

Only issue I see with this graph is that Engineering is too broad of a term to use.

I know that there is a massive demand for Chemical/Electrical Engineers with a huge shortfall of people, with Mechanical/Electronic being a bit more filled.